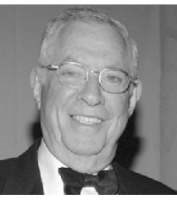 KAHN--Gilbert Stanley, born March 11, 1928 in New York City, devoted son of the late Janet Annenberg Hooker and the late L. Stanley Kahn, died suddenly on Monday, February 22, 2010 at his Palm Beach home. Mr. Kahn was a nephew of the late Ambassador Walter H. Annenberg. He was active in numerous philanthropic organizations in Miami, Palm Beach, New York City and Newport, RI. He was deeply committed to the world of purebred dogs (judging, showing, and breeding), Chairman of The AKC Museum of the Dog, former director of The Metropolitan Opera, and a member of the board of overseers for the University of Pennsylvania School of Veterinary Medicine. Gilbert will be greatly missed by his family and friends. He will be lovingly remembered and his kindness will always be with us. He is survived by his son John Noffo Kahn, his brother Donald Paul Kahn, his nieces Alexandra Kahn Graubert and Julie Kahn Brown, his nephews Donald Paul Kahn, Jr., Douglas Thompson Kahn, and Stephen David Kahn, and by four grand nieces and three grand nephews. A private service and interment will be held in New York.

Published by New York Times on Feb. 27, 2010.
To plant trees in memory, please visit the Sympathy Store.
MEMORIAL EVENTS
To offer your sympathy during this difficult time, you can now have memorial trees planted in a National Forest in memory of your loved one.
MAKE A DONATION
MEMORIES & CONDOLENCES
27 Entries
Lighting a candle in memory of Gil.

My thoughts are with you during this hard time! Gilbert will never be forgotten his memory will live on by all his great deeds, especially his love love of dogs.

Helga Maass Potter and Ms. Hedy, Shi Tzu exraordinair
March 25, 2010
Dear John, Our deepest sympathy to you. May all of your wonderful memories of Gilbert comfort you in this time of sorrow.

Linda Cook /Ron Livingston
March 11, 2010
To John and the family -- Our thoughts and prayers are with you during this sad time of the loss of our great friend Gilbert. Our many thoughts of the past will be in our memory of a very Special Person.
James W. Murphy
March 11, 2010
Dear John: My sincere sympathy. Mr. Kahn will be missed.
Marie Bortner
March 11, 2010
Gilbert Kahn was one of the most gracious, elegant, interesting, kind and generous individuals we have ever known. His presence in the world is irreplaceable. We will always be thankful for his finding of our beloved Charlie for us.
Christine & Stephen
Christine & Stephen Haverington & Federico
March 5, 2010
It is with great sadness that we hear of Gilbert’s passing. John, you have our deepest condolences and sympathies as you've lost a major part of your life. Comfort should be found on contemplation of the long and meaningful life Gilbert lived and the great and lasting legacy he has left personally and through his tireless and unselfish philanthropic activities. Godspeed Gilbert. You are in our prayers John.
Brooks Miller
March 3, 2010
My deepest sympathy to John, Nigel, Simon and Fabby…Mr. Kahn was truly a remarkable and kind man. I will always remember working with him on the Newport Flower Show, where his beautiful entries always won numerous blue ribbons. He will be missed by so many but leaves behind a wonderful legacy. - Shelly Petri
Shelly Petri
March 2, 2010
To John Noffo,
I used to work with you at Security Plastics and recently have run into you at the Opera in Miami. I want to express my heartfelt condolences to you. The loss of a parent is something you never get over. May your fond memories of your father give you comfort in the days ahead and always.

Sincerely,
Mari Valdes
Marielena (Mari) Valdes
March 1, 2010
Gilbert was a great friend while he lived in NYC. When he was an interior decorator he would come into my showroom and everyone adored him I saw him again in Florida and he gifted me with a wonderful Shih Tzu. He will be sorely missed by all who know and loved him.
Barbara Kessler
March 1, 2010
My deepest sympathies to Gilbert's family and friends. I met Gilbert showing dogs and I had just talked to him before Westimister. He said he was going to be ringside for BIS.
Gilbert will be truly missed by all who know and love him.
Donna Biller
February 28, 2010
Please accept my deepest sympathy on the death of Gilbert this month. My thoughts and prayers are with you and his entire family. I remember so many good times with him at Vizcaya and most recently in Newport. We had a delightful lunch one day together. I was very much surprised and deeply saddened when I heard the news. I know your loss is a great one. Sincerely, Leslie Rivera
Leslie Rivera
February 28, 2010
My deepest sympathy to John and all of the family. Gilbert and I were friends for 40 years. I visited him in Newport in July and spoke to him just three weeks ago about visiting him in Palm Beach next month after the Dog Show in New York. Gilbert was a kind and generous man and always the perfect host. I will miss him.
Fay Aronson
February 27, 2010
Dear John
I was saddened to read about Gilbert's passing. I am sure it is a tremendous loss for you. I wish you well in the years ahead. God Bless you both.

Robert Romagna
Miami, FL
Robert Romagna
February 27, 2010
Gilbert was one of the most wonderful and generous men that I have known. Always with a loving heart and a smile, he led his life in the most beautiful way. Once he visited me in Germany many years ago and I will always remember the happy times. We wll miss Gilbert Kahn very much. RIP Gilbert.
Sir Ronald W. Wetherington
February 27, 2010
John: Tony and I would like to extend to you our sympathy. We were very surprised to hear of the death of Gilbert. Anne Cruz
Anne Cruz
February 27, 2010
A truly wonderful and gentle-man will be missed by the dog world and, indeed, by all who had the honor of knowing Gilbert. Those of us so blessed as to call him friend will grieve and move on into the peacefulness of memories we share. We are all so blessed to have known him. May he rest in peace!
Janis Clary McGee
February 27, 2010
Gilbert was a person with incredible taste, and a good eye for people, animals and nature.
He will be missed by many!
michelle marx
February 27, 2010
Our entire family will miss Gilbert and his great love of life. We're sending all good thoughts to John. Sincerely, Rosemary Rogers
Rosemary Rogers
February 27, 2010
My thoughts and prayers are with you. what a marvelous man with such a zest for life....a true humanitarian !
Laura Costanzo
February 27, 2010
Gilbert Kahn's kindness and generosity were legendary. The world of purebred dogs will not be the same without him.
Keith Robbins
February 26, 2010
Our Society enjoyed Gilbert's patronage for some time and, as a result of his generosity, we were able to make provision for our future. He will be missed by so many dog people here in the United Kingdom. I personally had a chat with him during a visit to New York only last week and cherish the short time I was able to spend with him. On behalf of the Officers, Committee & Members of South Eastern Counties Toy Dog Society I would like to send our condolences to Gilbert's family and friends both in the USA and worldwide.
Stuart Band
February 26, 2010
My deepest sympathies to Gilbert's family and friends. I will remember Gilbert with fondness as a great and respected 'dog man'. He awarded me my very first point at a dog show.....and inspired me to continue in the sport.
I will miss him.
Carol Anne Giles, Coral Bay Pugs
Carol Anne Giles
February 26, 2010
I just saw and spoke to Gilbert at the Progressive Toy Show in New York. I thought and told him that he had never looked better. He will be missed by so many people in his life. My prayers for everyone in Gilbert's life.
Barbara Beissel
February 26, 2010
I am still a state of shock over his passing - he was a friend who touched so many lives, so many philanthropies, so much in the arts as well as Purebred Dogs. Gilbert is of a generation not easily replaced, nor is that generation likely to be replaced. I am so grateful to be able to say he was my friend .
Judy Gates
February 26, 2010
Gilbert Kahn was a kind man. He loved life and living things. His reputation for a keen eye while judging at AKC dog shows is legendary. He will be missed.
Bill Miller
February 26, 2010
My deepest condolences to Gilbert's family and friends.I remember him with affection and respect. He will be very much missed by everyone who knew him....
Darlene Arden
February 26, 2010
Showing 1 - 27 of 27 results