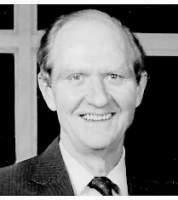 O'NEILL--Grover, Jr. The O'Neill family deeply regrets and mourns the passing of beloved Grover O'Neill, Jr. on February 14, 2014 at the age of 91. Grover, known to his friends as Bill, was a graduate of St. Mark's School, Class of 1940, and a graduate of Harvard College, Class of 1944, where he was a goalie on the Varsity Hockey Team. He served in the United States Army, Field Artillery from 1943-46 and was a First Lieutenant. Mr. O'Neill was a successful businessman for more than half a century. He joined Meriwether Capital in 1982 and remained active through 2013. He was a Trustee of St. Barnabas Hospital from 1960-2012, and Chairman of its Board from 1991-97; and Director of the Arthur Emerton Orvis Foundation, Inc. since 1968, and its President from 1990-2012. Predeceased by his first wife Kathryn, Bill is survived by his loving family: wife Elizabeth; daughter Carol O'Neill (Carey Battersby); son Tim O'Neill (Donna); stepchildren Melinda Mackay (Richard Essebag), Michael Mackay (Meggan) and grandchildren William O'Neill, Eliza Sommerville (Gavin), Kate Tuthill (Andrew), James Wendell (Meredith Weinberg), Zoe Mackay, and Hannah Mackay, and two great-grandchildren, Marilyn and Cormac Sommerville, and his sister Catharine Heyes, brother George O'Neill (Abby) and eight nieces and nephews. The memorial service will be held on Friday, March 21, 2014, 11am at St. James Episcopal Church, 865 Madison Ave. at 71st St, New York City. In lieu of flowers, donations can be made in his memory to St. Mark's School, 25 Marlborough Road, Southborough, MA, 01772, Attn: Dr. John C. Warren; or St. Barnabas Hospital, Finance Dept., 4422 Third Ave., Bronx, NY, 10457, Attn: Todd Gorlewski.

Published by New York Times on Mar. 9, 2014.
To plant trees in memory, please visit the Sympathy Store.
MEMORIAL EVENTS
To offer your sympathy during this difficult time, you can now have memorial trees planted in a National Forest in memory of your loved one.
MAKE A DONATION
MEMORIES & CONDOLENCES
0 Entries
Be the first to post a memory or condolences.