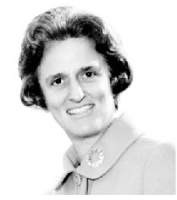 FUNERAL HOME
Frank E. Campbell The Funeral Chapel
1076 Madison Ave
New York, NY
HIRSCHHORN--Joan M. Joan Morgenthau Hirschhorn, also known as Joan E. Morgenthau, M.D., died on Monday, October 1, 2012. She was born on October 9, 1922. She was the wife of Fred Hirschhorn, Jr., whom she married in 1957, and the daughter of Elinor Fatman Morgenthau and Henry Morgenthau, Jr., Secretary of the Treasury, 1934-45, under President Franklin D. Roosevelt, who gave her a debut party in the East Room of the White House in 1940. She attended the Lincoln School in Manhattan and National Cathedral School in Washington, D.C., and was a graduate of The Madeira School, Vassar College, and the College of Physicians and Surgeons at Columbia University. She interned in Internal Medicine at Maimonides Medical Center and was a resident in Pediatrics and a fellow in Hematology at New York Hospital-Cornell University Medical Center. She was board-certified in Pediatrics and Adolescent Medicine. She was on the faculty at Cornell University School of Medicine for seventeen years. She subsequently served as Associate Dean for Student Affairs and Professor of Clinical Pediatrics and Preventive Medicine at the Mount Sinai School of Medicine, and Attending Pediatrician at Mount Sinai Hospital. She was Founder and Director of the Mount Sinai Adolescent Health Center, 1968-81. She went on to become Director of Health Services and Professor of Psychology at Smith College, 1981-88. She was Visiting Professor of Preventative Medicine at San Diego State University, 1989, Visiting Professor of Pediatrics at the University of California, San Diego, 1989, and Visiting Professor of Pediatrics at Stanford University, 1990. She also served as Fellow in Professional Responsibility (Ethics) at the Yale School of Medicine, 1990-92. She spent twenty-three years as Surveyor for the Joint Commission on Accreditation of Healthcare Organizations (JCAHO), 1981--04, and was the first woman to be elected to the Board of the Henry J. Kaiser Family Foundation, 1982--90. She served on the boards of the Greenwich Country Day School, The Madeira School, and Vassar College, 1977-85. She served on the advisory committee of numerous community organizations including the Visiting Nurse Service of New York, the Community Aid Society, Planned Parenthood-World Population, the James Weldon Johnson Counseling Center, Northside Center for Child Development, and the Health and Human Services task force for the U.S. Government. She was a member of the Cosmopolitan Club. Fred Hirschhorn, Jr. predeceased her in May of this year. She is survived by two brothers, Henry Morgenthau, III and Robert M. Morgenthau, three daughters, Elizabeth H. Wilson (Bruce) of Newton, MA, Joan H. Bright (David) of Manhattan, and Elinor H. Hirschhorn of Manhattan, and seven grandchildren. She lived in Old Greenwich, CT, until 2007 when she moved to Edgehill Retirement Community in Stamford, CT. Memorial service at Temple Emanu-El, Fifth Avenue between 65th and 66th Street, New York, NY, will be on Tuesday, October 9 at 1:30pm with a reception to follow. Burial will be private. In lieu of flowers, the family asks that a contribution be made to Vassar College, Box 14, 124 Raymond Avenue, Poughkeepsie, NY, 12604.

To plant trees in memory, please visit our Sympathy Store.
Published by New York Times on Oct. 7, 2012.
MEMORIAL EVENTS
No memorial events are currently scheduled.
To offer your sympathy during this difficult time, you can now have memorial trees planted in a National Forest in memory of your loved one.
Funeral services provided by:
Frank E. Campbell The Funeral Chapel
MEMORIES & CONDOLENCES
12 Entries
Joan was a terrific woman and a great mentor. I remember a dinner when we discovered that Fred knew my Grandfather in Michigan. Such a delightful couple.
Michael Alcenius
November 17, 2012
October 14, 2012
It was my privilege and honor to work for Joan at the Mount Sinai Adolescent Health Center.
Joan made a huge difference in the lives of untold numbers of young people.
My sincere sympathy to Joan's family.

Sue T. Cohen, New York City
sue cohen
October 14, 2012
It was with such heartfelt sadness that my brothers, sisters and I just learned of Dr. Hirschhorn's passing. Blanche Pavlis – her Vassar classmate, longtime friend and our late mother – always held Dr. Hirschhorn in such high-esteem and never failed to point her out to us as the shining example of there being no unsurpassable limits in life. We will always remember her as such a caring doctor, devoted mother and lifetime friend and extend our deepest sympathies to her family.
Paul Pavlis
October 11, 2012
I will miss you both. You addded so much to this universe and served as a tremendous role model for our young girls. Pleasant journey and hugs to those you have left behind.
Judy Naumburg
Judy Naumburg
October 10, 2012
Dr Morgenthau was the first "real" doctor I ever saw as a freshman at Smith College. Compassionate and serious, she treated me with respect and dignity knowing that my uncles (the Gribetz pediatricians) had prepared me well to move forward to a woman, adult doctor.
My sympathies to the entire family,
Sarah Gribetz
SarahGribetzS GribetzSarahGribetzSG
October 9, 2012
I am so saddened that my friends the Hirschorn's are no longer with us. I had the most amazing times with them when I was back in Greenwich caring for my Mom. My Mom and Joan knew each other since they were kids. I loved to listen to them retell stories of their childhood together and my favorite was when they had a tomato fight in my Grandparents kitchen!!! When they retold this they laughed like kids all over again. I loved to visit Fred & Joan whenever I was back there. They were the most amazing couple I've ever met. I miss them so much.
To my old classmate Joan & her family my deepest and sincerest condolences. Know in your heart that your parents are now together again as they always have been.
Charlie Jeffery
Charlie Jeffery
October 7, 2012
My sympathy to Bob. A great woman has left us,Franny
October 7, 2012
If most of the world thought like Joan, what a great place the world would be. I learned from her and feel privileged to have called her a friend, Franny Taft
Franny Taft Taft
October 7, 2012
My heartfelt condolences to the Morgenthau family in the loss of Joan. She was an incredible example of how the glass ceiling can be shattered with grace, dignity, brilliance and great heart. I remember reading about her naming her horse "Me Too" when she was a little girl. She wanted to keep Today, a lot of women and men can study Joan's legacy and say "Me too, I want be like her."
max lewkowicz
October 7, 2012
I am deeply saddened by Joan's passing and on hearing of Fred's passing as well. Joan and I became fast friends walking the "patch loop road" at 6:30am many crisp August summer mornings in Blue Hill, Maine. She set a fast pace up Quarry Hill Lane and down Borderland Hill in her flannel shirt and khaki pants. We enjoyed many evenings having cocktails and hors d'oeuvres either on their porch or the veranda at Landfall overlooking the beautiful view of Blue Hill Bay. My most favorite memory of Joan was of hiking Blue Hill Mountain when she was 80. There was a large group with kids and adults and she was so proud of her accomplishment. It was a great honor and privilege to know both Joan and Fred. I will carry their memory in my heart always. Our deepest sympathy goes out to Joan's family in this time of deep sorrow.
Ann Maas
October 6, 2012
Our deepest sympathies to Henry, Bob and all the Morgenthau and Hirschorn chidren.
The Skolnik Family
October 4, 2012
This magnificent woman, one of the most influential in my life, is a huge loss to our country, and to me.
Jay Roberts
October 4, 2012
Showing 1 - 12 of 12 results