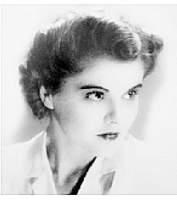 GLUSMAN--Louise, A Clinical Assistant Professor of Psychiatry at Columbia University's College of Physicians and Surgeons and private practitioner whose professional name was Louise J. Coleman, MD, died in Morristown, NJ on June 4th. She was 94. A stunning beauty and superb athlete, she supported herself in medical school by modeling Cole and Catalina swimsuits in the 1940s and working as a synchronized swimmer at MGM in several Esther Williams movies, including "This Time for Keeps." She graduated from the University of Southern California Medical School (one of two women in her class) and did her post-doctoral psychoanalytic training at the Menninger School of Psychiatry in Topeka, Kansas, where she met Dr. Murray Glusman, soon a Professor of Clinical Psychiatry at P&S. They married in 1949, and remained married and devoted to each other until his death in 2005. In a profession dominated by men, she was an inspiration to her colleagues and patients alike, the epitome of grace and endurance. She was beloved by her husband, Murray; her three children, Dr. Steven Glusman of El Paso, TX, Dr. Joan Glusman of Jamestown, RI, and John Glusman of Glen Ridge, NJ; and her six grandchildren, Karl, Elizabeth, Jeffrey, Jenny, Isabel, and Graham. Those who knew her from summers in Woods Hole, MA, will never forget the image of her swimming effortlessly, sometimes far off-shore, a white swimming cap on the horizon, who could part the waters at her will.

Published by New York Times on Jun. 15, 2014.
To plant trees in memory, please visit the Sympathy Store.
MEMORIAL EVENTS
To offer your sympathy during this difficult time, you can now have memorial trees planted in a National Forest in memory of your loved one.
MAKE A DONATION
MEMORIES & CONDOLENCES
3 Entries
John & family,
So sorry about your Mom's passing. It made me reread Conduct Under Fire and I realized once again how extraordinary both of your parents were. My heart is with you. Nancy
Nancy Malkiel
June 20, 2014
John:
So sorry to hear the news.
Hope you and family are doing ok.
Seth Mitchell ('74)
Seth Mitchell
June 16, 2014
Louise was a wonderful person and like a 2nd mom to me during my childhood summers in Woods Hole. Swim on Louise.
Andy Malkiel
June 15, 2014
Showing 1 - 3 of 3 results