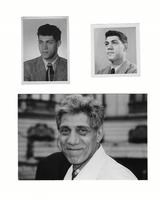 1924 - 2019
A meaningful life means a lot.  Norman Eagle Ed.D., beloved father and grandfather, life-long champion for justice, peace and the environment, who passed away on August 2nd, one month short of 95 years.

Born Staten Island, NY in September, 1924. Received many of the highest academic awards granted to NYC junior and senior high-school graduates. At Alfred University in 1943 entered the ROTC program to earn his officers commission in the Navy - served on a mine sweeper in the South Pacific during WWII.

First in his family to go to college. Earned a bachelor degree at the University of Rochester 1946, and a master's degree from Yale in 1947. After attending the World Youth Congress of 1947 in war torn Europe, volunteered on infrastructure projects. Then joined the International Refugee Organization, (IRO), in Austria, where he led the investigation unit to recover, and reunite with surviving relatives, children who had been kidnapped by the Nazis, and placed in German/Austrian households in need of children to serve as domestic and farm laborers during the war. His Austrian base helped to nurture his passion for classical music, especially that of Mozart.

In 1952 he met Betty Sobel, herself an activist, social worker, and music lover from Brooklyn. They married later that year.

Growing a family of 3 boys, Norman and Betty moved to Elizabeth NJ near where he taught high school math. Also worked on the New Jersey Railroad to help open up the union to give equal opportunity to African-Americans.  Began work on his Doctorate in Education at Rutgers University.

Around 1960, Norman became the school psychologist at Fort Lee, NJ High School. The Eagle's, then living in Edgewater, NJ, decided to move to nearby Englewood NJ where the schools had become integrated, which they felt would better serve their children and the interests of humanity.

Mid-1960s Norman and Betty's focus on activism shifted primarily to the Vietnam war. The entire family participated in the first national anti-Vietnam War demonstration in Washington D.C., in 1965 and many other rallies, demonstrations and actions thereafter.

By the late 60s Norman moved from his position as Director of School Psychology for the Mount Vernon, NY school system to Director of Institutional Research at Bronx Community College.

In Vermont in 1984, retired from their professional careers, Norman and Betty combined interests in European travel and classical music to form Mozart's Europe Tours, leading travelers on music and culture group tours. It became a great success.

Eventually they followed the draw of grandchildren being raised in Los Angeles. They retired from business but not from their humanitarian activism.

For ten years they shared their activism with concerned citizens in the Oxnard/Ventura CA area. Then, tragically, Betty died and Norman never fully recovered from this loss.

The Eagle sons ask that should you choose to recognize the life of Norman and Betty Eagle, their parents would have suggested that a commitment to do something for peace and justice, or a contribution to the ACLU or other progressive cause, would be appropriate.
Published by New York Times from Sep. 16 to Sep. 17, 2019.
To plant trees in memory, please visit the Sympathy Store.
MEMORIAL EVENTS
To offer your sympathy during this difficult time, you can now have memorial trees planted in a National Forest in memory of your loved one.
MAKE A DONATION
MEMORIES & CONDOLENCES
0 Entries
Be the first to post a memory or condolences.