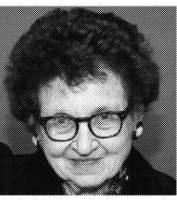 95, on December 19. Daughter of Modernist architect Ely Jacques Kahn and Elsie Plaut, sister of E.J. Kahn Jr. of The New Yorker and mystery editor Joan Kahn, and aunt to Ely Jacques Kahn III, Joseph Plaut Kahn and Hamilton Rice Kahn. Artist, sculptor, world traveler, theatre lover and friend to many writers, editors and artists. A true New Yorker-- couldn't drive, lived on 36th Street for 77 years, read and evaluated every manuscript her sister published. Graduate of Bryn Mawr, studied at the Art Students League, walked two miles to and from her downtown studio for more than seven decades. A service will be held Sunday, December 27 at the Frank E. Campbell Funeral Chapel at 1076 Madison Avenue, beginning at 11am.

Published by New York Times on Dec. 24, 2015.
To plant trees in memory, please visit the Sympathy Store.
MEMORIAL EVENTS
To offer your sympathy during this difficult time, you can now have memorial trees planted in a National Forest in memory of your loved one.
Funeral services provided by:
Frank E. Campbell The Funeral Chapel
MAKE A DONATION
MEMORIES & CONDOLENCES
Sponsored by anonymous.
1 Entry
Olivia's art and sculpture were expressions of a vivid intellect, including involvement with many aspects of her creative family. She was my very good friend, and I send sympathy to all of the family.
December 26, 2015
Showing 1 - 1 of 1 results