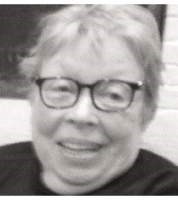 HOLDERNESS--Sheila. Sheila Garvan Holderness, died last Sunday, June 23, 2013 at home in Brooklyn Heights, at the age of 73. Her death was unexpected but peaceful, and came upon her while she was engaged with her beloved Sunday New York Times crossword puzzle. She is survived by her loving daughters, Claire Crockett Holderness of Brooklyn, and Julia Simms Holderness of Cambridge, Mass., and her grandchildren, Soroush Crockett Vakhshoori and Shahrzad Holderness Vakhshoori, also of Cambridge. Sheila was born in Chicago on October 19, 1939 to Lucy Janis Garvan and Thomas Garvan, a police detective. The first person in her family to graduate from high school, she attended Trinity College in Washington, D.C. on a full scholarship, and then won a prestigious Woodrow Wilson Fellowship, which she used to earn an M. Phil. in American Studies at Yale. One of the few female students at Yale at the time, she throve. Following her marriage to Algernon Sidney Holderness, Jr., Sheila moved from New Haven to New York and exchanged academia for a busy life of motherhood and volunteering. She was moved by a deep concern for people in need, in particular girls, women, and recent immigrants. She sat on the national boards of Girls Incorporated and the Association of Junior Leagues, among others; locally, she sat on the boards of the Brooklyn Historical Society, the Brooklyn Hospital Center, Colony-South Brooklyn Houses, the Packer Collegiate Institute, the Junior League of Brooklyn (of which she was President), and the Korean-American Family Service Center. In her mid forties, Sheila began working full-time. She was Executive Director of the New York Women's Foundation, and later directed development at the NOW Legal Defense and Education Fund, New York Immigration Coalition, and Girl Scouts Council of Greater New York. She was a mentor to her younger colleagues and a friend to many, including the ladies of Mrs. Field's Literary Society, a Brooklyn Heights institution of which she was a member for forty years. As busy as she was, Sheila read voraciously. She travelled the globe. She loved gardening, the arts, and animals, especially baby animals, and she vied with human children for a chance to pet them at the springtime farmers' market. More than anything, Sheila loved her family. Sheila Holderness was brilliant, witty, passionate, fierce, stubborn, and constantly curious. She would deny herself without hesitation, if it meant that she could help someone she cared about. She was a loving, generous mother and grandmother. She was a self-made woman in every respect, steady in her response to life's ups and downs. She always landed on her feet. A memorial service for Sheila will be held in the fall (details to follow). Donations may be made in Sheila's memory to Girls Incorporated: www.girlsinc.org or 120 Wall Street, New York, NY 10005; (212) 509-2000.

Published by New York Times on Jun. 30, 2013.
To plant trees in memory, please visit the Sympathy Store.
MEMORIAL EVENTS
To offer your sympathy during this difficult time, you can now have memorial trees planted in a National Forest in memory of your loved one.
MAKE A DONATION
MEMORIES & CONDOLENCES
2 Entries
What a shock!
A wonderful, full life and family is your legacy. RIP
Ann Chapin
July 3, 2013
What a beautiful obituary!!! You two wonderful girls did a great job!!! Your mother would have loved it! xo. Marcia
June 30, 2013
Showing 1 - 2 of 2 results