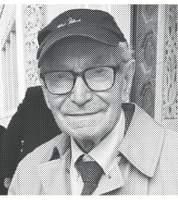 FUNERAL HOME
Riverside Memorial Chapel
180 West 76th Street
New York, NY
ROSENKRANZ--Sol. Sol Rosenkranz, died at the age of 101 on Sunday, October 27th at his home on West End Avenue in Manhattan. Born in Grabow, Poland, on February 16, 1918, Sol was a Holocaust survivor who lived through the ravages of six Nazi labor camps until his liberation in Theresienstadt. Sol met his wife, Sala (Sally) Kuperwasser, in Bergen-Belsen and after settling in New York, he started a slipcover business in Brooklyn. Years later he opened a large leather wear factory in New York's garment district. Sol and Sally retired to Los Angeles in 1974 where he volunteered at the Simon Wiesenthal Center for thirteen years. Upon Sally's death In 1996, Sol relocated to the Upper West Side of Manhattan and for more than twenty years was an active gallery educator at the Museum of Jewish Heritage in Battery Park, where a large-scale photo of him, along with other survivors' portraits, graces the facade of the museum. Sol educated tens of thousands of visitors of all ages, races and religions about the Shoah, providing an irrefutable tale of his personal journey during the war. His family of nine members was decimated. Only one brother, Henry, survived. Sol is survived by his son, Joel Rosenkranz (companion Helen Nitkin), daughter, Rita Rosenkranz (companion Mort Rosen), and his grandson, Daniel Rosenkranz. He was predeceased by his son Melvin Rosenkranz and daughter-in-law, Brigitte Maurer (Daniel's parents). He is also survived by his nieces Sarah Goldstein and Frances Rosenkranz and their families, and his niece Eva Grubler-Vargas and her family. After Sally's death in 1996, Sal married a close family friend. Charlotte Sherman, in 2000, and their marriage lasted until her death two years later. Sol is survived by Charlotte's loving children, Abby Cook, Hope Jones, and Glen Sherman and their families. Sol was a singular man whose passion for purpose, innate optimism, moral compass, quiet dignity and irrepressible memory proved inspiring to his family, his shul, his museum, and so many others. Donations in his memory may be sent to: The Museum of Jewish Heritage, 36 Battery Place, New York, NY 10280. Please note on check - Sol Rosenkranz and Family Fund.

Published by New York Times on Nov. 3, 2019.
To plant trees in memory, please visit the Sympathy Store.
MEMORIAL EVENTS
To offer your sympathy during this difficult time, you can now have memorial trees planted in a National Forest in memory of your loved one.
Funeral services provided by:
Riverside Memorial Chapel
MAKE A DONATION
MEMORIES & CONDOLENCES
2 Entries
I read the passing of Sol and felt this tremendous wave of sadness. I had the pleasure of meeting Sol while I was chaperoning my sons field trip in 2014, we traveled from Raleigh, NC. He was our guide at the Jewish Heritage Museum. He made such a tremendous impact on me personally, telling his story and the decisions his family had to make. I wish his family peace.
Andy Constantino
Acquaintance
September 4, 2020
Sol is an inspiration for his family across the world and a light for all humanity.
Leonardo Najmias
November 5, 2019
Showing 1 - 2 of 2 results