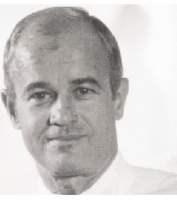 KACIK--Walter, Died in Southampton on March 21st. He was 82. Born and raised in New York City, he graduated from NYU in 1951 and earned a Bachelor of Fine Arts from Yale University in 1953. He served in the US Army from 1953-1955. He worked for the architectural design firm of I.M. Pei & Associates from 1956-1962. He founded his own graphic design firm, Walter Kacik Design Associates, in 1966. One of his major clients was BASF. He redesigned the company's logo and type face which are still in use. His firm was also contracted by the Commissioner of Sanitation during the Lindsay Administration, Samuel J. Kearing Jr. to redesign the NYC Collection trucks from a "messy" yellow to a simplified white with black letters, "SANITATION" -a design that is still in use. He also designed the Keep New York Clean sign. He was a faculty member of the Art Department at NYU during 1965-1966. He built a modern weekend home in Water Mill, NY in the early '70's and moved there full-time in 2006. In his later years, he volunteered at the Animal Rescue Fund (ARF) store in the Hamptons. Walter is survived by his nephew, Gregory Kasick, his wife Nancy, their daughter Paige and his sister-in-law, Barbara. Interment will be in the family plot in Calvary Cemetery in Woodside, Queens.

Published by New York Times on Apr. 10, 2013.
To plant trees in memory, please visit the Sympathy Store.
MEMORIAL EVENTS
To offer your sympathy during this difficult time, you can now have memorial trees planted in a National Forest in memory of your loved one.
MAKE A DONATION
MEMORIES & CONDOLENCES
Sponsored by Elizabeth A Chapman.
2 Entries
I remember working with Walter Kacik in Chicago as architectural consultants to Robert Vogele Design while Walter was Bob's lead designer. Walter's standards were the high bar in the design world in Chicago at the time before he set sail for N.Y.C. For my partner, Walter's friend, Bill Uhm, AIA,
Charles(Chuck)Winkler AIA/E
Charles Winkler
April 12, 2013
I remember Walter when I worked with him at I.M. Pei. He was
a cheerful, sunny energetic personality that lifted all spirits.
Marty Norman
April 11, 2013
Showing 1 - 2 of 2 results