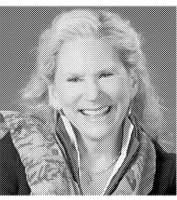 who devoted her life to helping underserved populations, died peacefully in Los Angeles on Sunday, July 26, 2016. Born in New York City in 1946 to Whit and Hallie Burnett, Whitney began her career as an opera singer, performing as a mezzo-soprano in houses that included her cherished Santa Fe Opera. She then became the casting director for the soap operas The Edge of Night and Search for Tomorrow, where she took joy in casting young aspiring actors. Later, building on her experience as a board member for the Boys and Girls Clubs of America, and while raising three sons, she served as a fundraiser for The Women's Project Theater, as the development director of the Harlem School of the Arts, and finally, for 13 wonderful years, as the executive director of The National Foundation for Facial Reconstruction, where she supported treatment for children with facial differences. Tireless even as she battled cancer, Whitney continued to serve those in need as a tutor and mentor to homeless youth through The Doe Fund. Only months ago, and just a week removed from a hospital bed, Whitney even traveled to Jordan to work with torture victims in refugee camps. Having lovingly raised three sons, in 2005 Whitney met her beloved husband Michael MacLeod, whom she cared for devotedly until he died in 2014. Whitney is survived by her three sons, McCaleb Burnett, Philip Voss, and Jeremy Voss; daughter-in-law, Brooksie Voss; and brother, John Burnett. Whitney made the world a much better place for her family and many others, and her loving presence will remain in their hearts. In lieu of flowers, the family requests that you consider donating to The West End Collegiate Church or The Center for Victims of Torture, an organization with which both Whitney and her husband Michael were closely involved. A memorial service will be held on Friday, July 8 at 11am at The West End Collegiate Church, where Whitney served as a deacon and whose community she treasured.

Published by New York Times on Jul. 6, 2016.
To plant trees in memory, please visit the Sympathy Store.
MEMORIAL EVENTS
To offer your sympathy during this difficult time, you can now have memorial trees planted in a National Forest in memory of your loved one.
MAKE A DONATION
MEMORIES & CONDOLENCES
5 Entries
Your kindness, sweetness, graciousness and knowing presence will remain with me always.
Rest in Peace Whitney.
Shelley Ackerman
July 10, 2016
Whitney was a treasured friend, an amazing presence and incredible humanitarian. A light has been extinguished from our world.
cindy zirkle
July 6, 2016
I never met Whitney MacLeod, but the obituary today moved me to contribute to the Center for Victims of Torture in her memory. I am also going to post the obituary on my blog. What a valiant servant of humanity in the name of the church of Jesus Christ.
Rev. Fleming Rutledge
July 6, 2016
You were an angel on earth.
You accomplished so much.
May you rest in peace.
Ann Barish
July 6, 2016
Rest In Peace and sing with the Angels! God Bless you for all you have done on Earth!
Rosemary Thompson
July 6, 2016
Showing 1 - 5 of 5 results