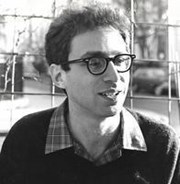 1943 - 2019
William P. (Willie) Lockeretz died peacefully in Millbury, MA among loved ones, with his favorite music playing, at age 76 following a lengthy battle with Parkinson's Disease. He is survived by sons David Lockeretz of Millbury, MA and Benjamin Lockeretz of Brooklyn, daughters in law Minda Lee Lockeretz of Millbury, MA and Hikma Abdulghani of Brooklyn; brother Joseph Lockeretz of London, two grandsons and three nephews. He is remembered by friends, students, colleagues and family as an intelligent man with many interests including music, civil rights, movies, sports, history, science and language, who was as likely to laugh at the Jerky Boys as he was a Shakespeare comedy. He grew up in the Bronx but followed the Brooklyn Dodgers and counted watching Jackie Robinson at Ebbets Field among his favorite memories. He attended Bronx High School of Science and City College New York. After receiving his doctorate from Harvard, he taught at Washington University in St. Louis and then returned to Boston as a research professor at Tufts University, specializing in agriculture. He has been laid to rest alongside his wife of 41 years, the writer Sarah Wernick, in Woodbridge, NJ. A Boston area memorial will take place in the next few months.
Published by New York Times from Dec. 20 to Dec. 21, 2019.
To plant trees in memory, please visit the Sympathy Store.
MEMORIAL EVENTS
To offer your sympathy during this difficult time, you can now have memorial trees planted in a National Forest in memory of your loved one.
MAKE A DONATION
MEMORIES & CONDOLENCES
9 Entries
I am so grateful for his friendship through many years. He thought me so much on writing, on English, on thinking, on perspective of life and had such a wonderful sense of humour. He was like a supervisor for all of us at Norwegian Centre for Organic farming, and we will never forget him.
Sissel Hansen
Friend
December 14, 2020
Willie was the smartest person I ever met. We were good friends in graduate school and his brilliance as a thinker was matched by a wonderful sense of humor, deep caring for his friends and others and just good common sense about what mattered in the world. His soul mate Sarah was a perfect match for this great guy. He passed, unfortunately, at a time when the world desperately needs more truly good people like him. "L Will" (Sarah will know what this means) will still be chuckling somewhere.
Karl Spielmann
Friend
May 14, 2020
In memorial of William Lockeretz

With sorrow, we have received the news about William Lockeretz, that he passed away on December 2019. Willie was a close friend of the Norwegian Centre for Organic Agriculture (NORSK) and he came a few times to visit us, also together with his wife Sarah. Willie made friends everywhere and could talk to anyone. When giving feedback on manuscripts - one of the things where he kindly assisted us - he did not only propose better wording, but commented on the roots of the language, e.g. the difference between squash and zucchini. His first Norwegian friendship he made with Sissel Hansen during the organic world congress in Copenhagen, Denmark 1996, because he remembered her name from a co-authorship in the IFOAM conference in Boston in 1984.Her first name was the same as his favourite Jewish bread. Soon, he became the friend of every NORSK-colleague, and we were all extremely proud when Willie, while giving a plenary talk for several hundred people in the organic world congress in Basel, Switzerland in 2000, mentioned NORSK next to FiBL (the world's largest research institute in organic agriculture), when providing an overview of organic research institutes. The last time many of us met Willie in person was for the organic world congress in Modena, Italy in 2008 where he celebrated the launch of his excellent text-book Organic Farming: An International History, 2007 (CABI)Possibly, the news about his passing away may give a refreshed attention to this important book, where Willie along with several competent co-authors compiled a lot of interesting background information on organic pioneer movements and persons, and explained the philosophical roots which are so essential for a global movement to be able to grow in a safe and consistent manner. During the Modena event, he also pulled some strings to catch a position for Anne-Kristin in the board of ISOFAR, an international network of scientists researching organic agriculture where Willie was a member from the start, in 2003, until 2011. This organisation has grown since the start, and in the same year which Willie left the board, the peer-reviewed journal Organic Agriculture (Springer) published its first issue, which has grown steadily and by 2020, presented 34 issues with 280 articles. Willie was one of the academic pioneers within organic agriculture, and we will remember his kindness and humour when working on in hopefully the same direction as he would have liked himself.

On behalf of staff at NORSK and in NIBIO, Norway
Sissel Hansen, Anne-Kristin Les and Matthias Koesling, Tingvoll, Norway
February 6, 2020
To know Willie was a special privilege as many have already said. His humor, intellect and creativity were extraordinary. Those of us who worked with him in the early days of the Friedman School were privileged to have him as a friend and colleague.
Jeanne Goldberg
Jeanne Goldberg
January 8, 2020
To Willie's family my thoughts are with you. I had the honor and pleasure of working with Willie at Tufts early in my career. He had recently started as a Research Professor. I was a newly minted PhD just back from famine early warning work in Chad. I agreed to help on a short project and soon found myself immersed in learning all about iguanas and their role in the ecosystem of living fences in Panama, a subject I would never encountered had I not met Prof Lockeretz. He was rigorous in research and inspiring to a young post doc. Willie always had time to talk through an issue, sharing his unconventional perspective and wealth of knowledge. He was also funny and whimsical. Together with my mentor, Bea Rogers, Willie introduced me to Don Marquis' Archy and Mahitabel, which we read together during lunch. It has been a source of enjoyment ever since. I will continue to think of Willie with a smile every time I re-read a verse. Willie and his contributions to our lives will be remembered.
Nina Schlossman
January 7, 2020
Willie,

Every memory I have of you brings a smile to my face. As a professor, you brought such joy to the subject matter at hand, and you inspired curiosity, integrity and humor in your students. I'm ever grateful for all I learned from you personally, and for the profound contributions you made to the field of sustainable agriculture. But above all, I'm grateful for the example you provided in the way you lived your life. Your memory truly is a blessing.

Grateful beyond words and with love and strength to all your loved ones,

Alicia
Alicia Harvie
January 6, 2020
I was so grateful to have you as my professor to continue to refine my agricultural education and understanding of "production ag" - thanks for all you have contributed to the world Dr. Lockeretz!
Jennifer Hashley
January 6, 2020
My condolences to the family on your loss. Willie was a treasured colleague and friend while he was at Tufts. In addition to professional interests, we shared a love of words and language, and an appreciation for Archy and Mehitabel and Damon Runyon. He was a committed scholar, a genuine polymath, and an all-around delightful person. As the prayer says, he will live on in the memory of those who loved and cared about him.
Bea Rogers
January 5, 2020
It was an honor and a pleasure to count you as a friend...you and Sarah both...since 1970. You made important contributions to agriculture, both practical and in research and the "food community" has benefited greatly from your work at Tufts. May you rest in peace, and may your memory live in all the ways you contributed to the improvement of education and the practice of agriculture.
Susan Kannenberg
December 29, 2019
Showing 1 - 9 of 9 results