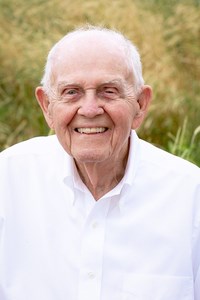 A person who lives a long life with qualities of kindness, thoughtfulness, generosity, loyalty, service, excellence, humility and faith is an inspiration. George Kent's life is most surely an inspiration.

His mother Dolly gave birth to him at their home in Chillicothe, Mo., and the neighbor boys brought him in with a bang with their pre-Independence Day firecrackers. Chillicothe was a fine place for a boy to grow up. Young George was free to roam in the meadow and woods behind the family's house and soak in a love for nature and beauty. When he was very little he was often lulled to sleep under the quilting rack set up in his great-grandmother's house as she and his mother and other women stitched and talked. He walked to church with his great-grandmother each Sunday, and dreamed of adventure as he sketched places he saw in the National Geographic magazine. His family home was filled with music with his mother and sister Mary at the piano. He played the French horn in the school band, whose snappy uniform included a cape, and he and Mary sang in the high school's mixed chorus; little brother Jerry played the trumpet and is his surviving sibling. His father Busby worked hard at the post office, and both parents ensured that their three children had what they needed to thrive.

At 19 he left Chillicothe and his mother's cooking for the United States Army Air Corps to serve his country during World War II. He was stationed in various places in the Pacific Islands as a relay radio operator, his precision and focus suiting him well for the rapid dots and dashes of the radios' Morse Code telegraphy. He was in awe looking over the coral reefs as he hung onto ropes in the open door of the hatch of a cargo plane flying from New Zealand across the point of Australia.

After the war the G.I. Bill funded his studies at Missouri Valley College, where he earned a B.S. degree in Business and Public Administration. He then put his skills to work as a CPA. George's entire career was with Shelter Insurance Company in Columbia, Mo. and its predecessor MFA. He retired in 1990 as the company's Vice President and Treasurer after decades of contributing to the company's expansion and fiscal strength.

George met and fell in love with Carol Fulton, they married in 1956 and their daughter Catherine was born two years later. Though they looked forward to a bright future, Carol died in 1971 and he began to find his way as a widowed parent.

Thanks to the matchmaking talents of friends, George found love again. He and Carol Judy Stella, a beautiful widow, married in 1973. He became the dad to her children, April Stella and Reid Stella, and Carol the mom to Catherine. Their years together were filled with a mutual love of the arts and music, wonderful food and travel, and service to the community. After George retired, he and Carol settled in Auburn, Al., a village they dearly loved calling home. (George cheered with equal gusto for the Tigers of Mizzou and the Tigers of Auburn.) His beloved Carol passed away in 2012.

George read widely, and was a life-long learner. As his body became less cooperative, he stayed connected with the world and his family through his iPad. He took joy in the interests, and academic and professional pursuits of his children and grandchildren. He encouraged an appreciation of fine art and music in his young ones, and he also taught them the lyrics to classics such as "Yes We Have No Bananas."

He adored children, and was especially proud of his status as a great-grandparent. As his children and grandchildren, we are committed to doing our best to carry forward our Dad's, our Papa's, legacy and to nurturing his great-grands with his values. We are April Stella MacDonald, Julia MacDonald, and Claire MacDonald; Reid and Constance Stella, Samuel and May Ling Stella and Lawrence Louis, Olivia Stella, Francesca and Alex Barth and Emilia Anne; Catherine Kent Ballance and Robert Ballance, Lora and Will Boyd and Kit Ezra, Emily and Patrick McClellen and Liam George and Catherine Grace.

He left his life on earth as the rare convergence of Saturn and Jupiter was visible in the heavens and the promise of God's love gave us hope. He died at Bethany House in Auburn in the tender care of hospice. As when he was born, he was wrapped in a quilt and surrounded with love.

We invite you to make contributions in celebration of his life to an organization serving the greater good. Among his favorites were the Stegall Seminary Scholarship Endowment Foundation; Auburn United Methodist Church; Lions Club International Humanitarian Foundation. A service celebrating his life will be held later in 2021.

We end with his wisdom. No matter how long life here lasts, it goes by very fast, so live meaningfully. Help those in need; comfort the mourning. Stay curious. Dance and sing. Befriend children. Celebrate often and with joy. Soak in the wonder and beauty of God's good gifts and give thanks for the blessing of life.

To plant trees in memory, please visit our Sympathy Store.
Published by The Opelika-Auburn News on Jan. 9, 2021.
MEMORIAL EVENTS
No memorial events are currently scheduled.
To offer your sympathy during this difficult time, you can now have memorial trees planted in a National Forest in memory of your loved one.
Funeral services provided by:
Jeffcoat-Trant Funeral Home
GUEST BOOK
1 Entry
It was so nice to read and learn about Uncle George´s early life and loves. I didn´t know about his love of nature, beauty, music, fine art and his joy in lifelong learning. A fine man and a great example to his family and his community. He will be sorely missed, but his legacy will live on especially in his children´s hearts and lives. Our sincere condolences for the loss of your loving Papa. Love, Cousin Monica and John Little
Monica and John Little
January 9, 2021