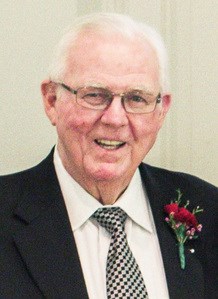 John Lewis Mitchell, Jr. was born in Bibb County, Alabama on August 15th, 1940. At an early age, "John L." developed what would become a life-long passion for hard work, working at his father's sawmill and family store. He graduated from Maplesville High School, where he lettered in football, baseball, and basketball. Mr. Mitchell was a proud veteran of the United States Navy, where he traveled abroad on the USS Tidewater, a Shenandoah-class destroyer tender. He was stationed in Norfolk, Virginia and traveled throughout Europe during his military service. After serving his country in the Navy, he began his successful thirty-year career with Liberty National Life Insurance Company. Following his retirement, he enjoyed a second career for fifteen years with Dan Cannon at Cannon Carpet One.

John L.'s greatest passion was his family. His children came above all else, and he enjoyed coaching and supporting his son Keith play baseball and basketball, watching his son Lance play football, and listening to his son D. Mark broadcast Opelika athletics for 37 years. Later in life, his greatest joy was his grandchildren and great-grandchildren, whom he loved unconditionally, and who lovingly called him "Big Pops".

A life-long athlete and sports enthusiast, John L. was a fan of the University of Alabama Crimson Tide and the New York Yankees. His fondest memory of his time in the Navy was attending a weekend series at Yankee Stadium in 1961. Mr. Mitchell loved golf and enjoyed playing with his friends into his seventies. John L. also coached youth sports for several years, forming special bonds with his players and leaving a life-long impact on many lives. He served on the City of Opelika Parks and Recreation's Board, was a member of the Kiwanis Club, and a member of the Opelika/Auburn Elks Club for over fifty years. Mr. Mitchell was a member of First Baptist Church Opelika since moving to Opelika in 1977.

The Mitchell family sends a special thank you to his many doctors and caregivers.

The Mitchell family will have a "Celebration of Life" service Saturday, November 21st, 2020, at 1 p.m., at First Baptist Church Opelika, in the main sanctuary with spaced seating. The family will hold a private burial prior to the service.

In lieu of flowers please make donations to First Baptist Church of Opelika Youth Group in his memory.

To plant trees in memory, please visit our Sympathy Store.
Published by The Opelika-Auburn News from Nov. 15 to Nov. 20, 2020.
MEMORIAL EVENTS
Nov
21
Celebration of Life
1:00p.m.
First Baptist Church
, Opelika, Alabama
Funeral services provided by:
Jeffcoat-Trant Funeral Home
GUEST BOOK
4 Entries
We are so sorry for your loss. Sure wish we could be there to celebrate his life with you. Please know we love you all and send our hugs and love and prayers for comfort.
Leigh Ann MIchalek
November 17, 2020
So sorry to hear of John L.´s passing. He was a great baseball coach to many young guys in Opelika. Jeremy, Jason and I send prayers and hugs to all of you during this time. Deborah Sasser
Deborah Sasser
November 16, 2020
Keith, I am so sorry for your loss. Your Dad was always one of my favorite District Managers. He loved his family very much.
Patti Herring
November 15, 2020
To the Mitchell Family sorry for your lost, we are praying for you'll, God bless you, stay, safe and strong ,Love You'll
shannon bryant
November 15, 2020