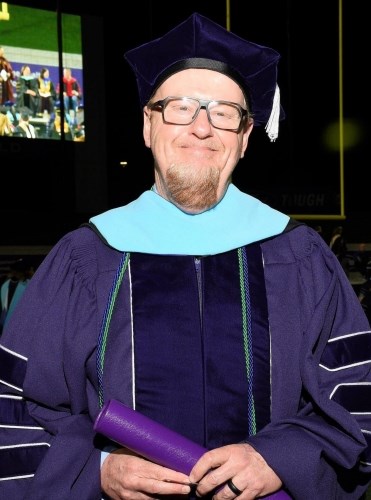 FUNERAL HOME
Frank W. Wilson Funeral Directors
4635 Oakwood Drive
Odessa, TX
ODESSA - Dr. Billy J. Spruill of Odessa, age 54, rode his GIANT onto the streets of gold while strumming his Hamer and Epihone on August, 3, 2021. After a 70+ mile fundraising bike ride on 7/17/2021, days later Billy was life-flighted to El Paso where he fought a vaccinated case of COVID for 13 ICU days. He is survived by his 'angel' wife Dr. Mikala Reznik-Spruill of Odessa; daughters Abbey Spruill of League City and Gabriella Spruill of Houston; mother of daughters, Jennifer Esposito; sons James Major Reznik and Drake M. Reznik, both of Odessa; four sisters Lynda White, Bonnie Downs and husband Milton, Betty Sommers, and April Tyner of Conroe-area; many nieces and nephews, three dogs Molly, Sadie, Boomer; four grand-cats and a grand-dog. Billy was exceptionally loved by the Rezniks, Stones, and his friends. He is preceded in death by his parents Lois Marie and Joe Bob Spruill of Deer Park.

Born in Pasadena, TX on December 11, 1966, Bill (as he was know to his family) attended Deer Park High School where he played violin and varsity tennis. Earning a GED his junior year, Billy enrolled in mortuary school and played music professionally Texas-wide. Playing bass and singing with Jeff Griffith (Woolsey) and the Taste of Texas Band in Nashville, TN was a highlight of his professional music career.

Billy married Jennifer Esposito in 1990 and 'baby girl' Abbey was born in 1994 as Billy continued to two-step his music across Texas. In 1998, Billy joined the Police Academy in LaPorte as 'baby girl' Gabriella was being born (literally), and served as an officer with LaPorte Police Department until 2006, earning many awards and recognitions.

The household relocated to Monahans where Billy served as a full time music minster. He was soon recruited back into law enforcement for the Monahans Police Department where he served as a Lieutenant 2007-2014, and second in command. He make significant impacts in the community and region working with local, state, and national agencies. Billy continued his love of music volunteering with the worship band at Crossroads-Monahans.

In 2014, Billy moved from adjunct professor role to full time with Odessa College as part of the esteemed Criminal Justice Department, receiving multiple recognitions and awards for many years. An honor provided by his administration, Billy attended a national educators conference in 2015, where he met Mikala as she facilitated courses in the higher education path. The couple later married in 2016 at the family home in Lake Brownwood, complete with a two-day celebration only made more amazing with the tie-dye theme, live music and serenade by Abbey and Gabriella, and loved ones. Billy couldn't be happier that he also gained his two sons. His time leading worship at Odessa Bible Church and as a staple electric guitar musician and vocalist with worship at Antioch Christian Church blessed so many.

Bill served as a Bike Ambassador with Bike Law, and rode weekly with the West Texas Gazelles, Peyton's, and Holy Cross rides. He valued the Permian Basin Bicycle Association and Bike Law for their safe promotion and growth of the sport which meant so much to his achievement of a healthy lifestyle.

Billy's academic journey began at the College of Biblical Studies-Houston (Bachelors degree,2006), multiple degrees from Liberty University (BS & MS in Criminal Justice; MA in Management & Leadership; MS in CJ: Public Administration), and was completed in May 2021 upon earning a Doctorate in Education-Higher Education Leadership from Abilene Christian University. The job of his dreams was his final one-Faculty Development Trainer in the Teaching and Learning Center of Midland College. His published dissertation can be found at https://digitalcommons.acu.edu.cgi/viewcontent.cgi?article=1392&context =etd

Two celebrations of Billy's life have been planned: one was held in Odessa, TX on Saturday, August, 14th at 2 pm at Antioch Christian Church; and one to be held in Houston, (Deer Park), TX on Saturday, September 11, 2021, 10am at Grand View Cemetery.

In lieu of flowers, the family respectfully requests donations be made to #BillysHelmets (https://gofundme/54e4531e) or call Peyton's Bikes at 432.699.1718.
Published by Odessa American on Aug. 22, 2021.
To plant trees in memory, please visit the Sympathy Store.
MEMORIAL EVENTS
Aug
14
Celebration of Life
2:00p.m.
Antioch Church
TX
Funeral services provided by:
Frank W. Wilson Funeral Directors
MAKE A DONATION
MEMORIES & CONDOLENCES
Sponsored by The ODESSA AMERICAN.
0 Entries
Be the first to post a memory or condolences.