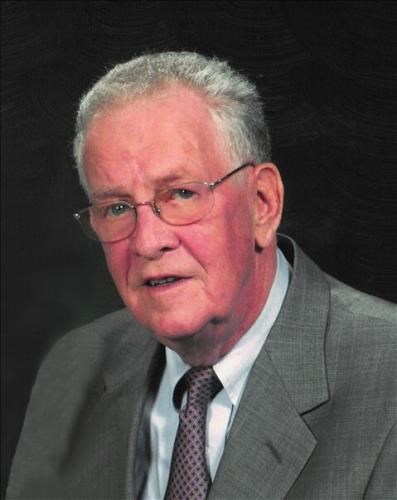 A proud Ligonier Mountaineer, Andy was born on May 6, 1934 to the late Ira W. Serena and Daisy S. Serena in Ligonier, Pennsylvania, a birthday he shared with his mother and future maternal grandmother-in-law.

He was the youngest of three children, and had two older sisters, Marjorie Jean Murren and Jane Louise Smith, whom he looked up to and adored.

Andy graduated from Ligonier High School in 1952, where he was a varsity basketball and football player, participated in dramatics, played the cornet, and was a member of the school chorus.

Upon graduation, he enlisted in the United States Air Force during the Korean War, and was honorably discharged in 1956 as a trained bomber gunner and jet engine mechanic, having proudly achieved the rank of Staff Sergeant.

He enrolled at the University of Pittsburgh at Johnstown in 1956 and in 1958, transferred to the University's main campus in Oakland. He graduated with honors from Pitt in 1960 with a degree in accounting, became a certified public accountant, and worked first as a public accountant for Arthur Andersen and Co., and later as a comptroller for the Gulf Oil Corporation (Gulf Oil Asia).

According to his senior yearbook, Andy's ultimate destination was "to hear the patter of little feet." He, along with his wife Patricia "Pat" Casey Serena, also from Ligonier, married in 1958, and became parents to six sons over the next 16 years. Andy adored his wife and was enormously proud of the family and home that they made together.

Remarkably gregarious and amiable, and endowed with a tremendous sense of humor, Andy truly enjoyed the company of others. He had a big personality and was quick to make friends, to whom he was loyal. Andy was a hard worker and led an interesting and full life. He liked to entertain and if you ever met him, you undoubtedly were regaled with some of the stories and adventures from his life and work, and perhaps, if you were truly lucky, a limerick or rhyme of his own invention.

Andy was happiest when he was busy and his favorite activities included spending time with his family and friends and engaging in or watching various sports and games. He enjoyed the beach, particularly Stone Harbor, N.J., and liked to read and solve puzzles and riddles.

Since his youth, he was a devoted fan of Pittsburgh's professional sports teams as well of those of the University of Pittsburgh.

He was a lifelong churchgoer (Ligonier Methodist and Trinity United Methodist), and much enjoyed singing in the choir, volunteering, fellowship, and being a part of church activities.

He was preceded in death by his parents; two sisters; two sons, Kirk P. Serena and Andrew E. "Dru" Serena; and one grandson, Mitchell L. Serena.

In lieu of flowers, the family requests that memorial contributions be made to Laurel House, Inc., 625 Cherrytree Lane, Suite 103, Uniontown, PA 15401.


Published by Observer-Reporter from Oct. 18 to Oct. 19, 2021.
To plant trees in memory, please visit the Sympathy Store.
MEMORIAL EVENTS
Oct
23
Memorial Gathering
11:00a.m. - 1:00p.m.
Trinity United Methodist Church
530 Center Church Road, McMurray, PA
Oct
23
Celebration of Life
10:00a.m.
Trinity United Methodist Church
530 Center Church Road, McMurray, PA
Funeral services provided by:
Beinhauer Family Funeral Homes - Peters Township - McMurray
MAKE A DONATION
MEMORIES & CONDOLENCES
4 Entries
Dear Serena family, I'm so sorry to hear of the passing of your husband, father and many other roles that Andrew fulfilled. There are more memories than can be counted, but most involve the Serena boys at Campus Life. You hosted our group many times and were a support and encouragement. May you celebrate his life every bit as much as you miss him. God's peace on your family.
Don Nixon
October 24, 2021
Dear Pat , I am sorry for the loss in your family! Andy will be missed! I loved his sense of humor and I loved that we shared the same birthday ! It was Such a pleasure to Know him and you as well! Hugs and prayers to your entire family! Love Claudette & Stephen
Claudette Holik
Friend
October 23, 2021
Our sincere condolences to the entire Serena family.
Matthew Thomas and Family
Friend
October 17, 2021
Our sincere condolenences to the entire Serena family.
Matthew Thomas & Family
Friend
October 17, 2021
Showing 1 - 4 of 4 results