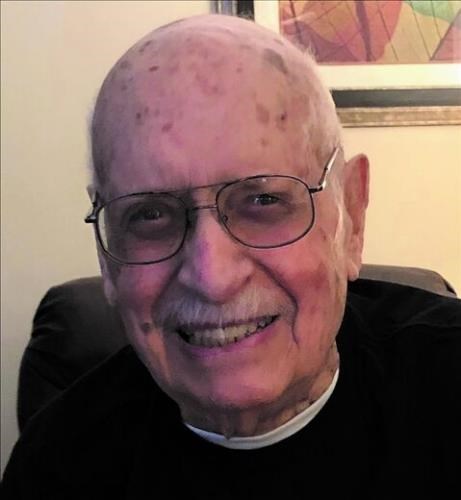 Bruno "Chick" Ceccarelli, 98, of McMurray, formerly of Fredericktown and Clarksville, passed away, peacefully, Tuesday, November 23, 2021. Born August 3, 1923, he was a son of the late Eusebio Ceccarelli and Maria Guggini Ceccarelli.

He was preceded in death by his baby son; siblings; and in-laws.

Having been married 74 years, Chick was ready to be with his wife, Betty, who passed away only 25 days ago.

Chick was a graduate of East Bethlehem High School. In 1943, right after high school, he joined the Army Air Force. A World War II veteran, Chick served in the European theater for three years. He was a member of the American Legion Post #0391, Fredericktown, for over 60 years.

He worked as a transit bus driver, insurance agent and at Wheeling Pittsburgh Steel.

One passion Chick had was coaching Little League, Pony League, Legion Ball and soft ball. He also was involved in bowling leagues and enjoyed walking on the trail at Ten Mile then later riding his recumbent bike many miles in his nineties.

Another passion was baseball (St. Louis Cardinals) and the Pittsburgh Steelers. They were his favorite teams to watch and criticize. He may not have showed a warm and fuzzy side, but he loved and cared about family and friends. Chick will be deeply missed by all who knew and loved him.

Family and friends are welcome from 2 until the 5 p.m. time of service Tuesday, November 30, in Pittsburgh Cremation and Funeral Care, 3287 Washington Road, McMurray, PA 15317, (724) 260-5546. Internment will take place at Greene County Cemetery at a later date for both Bruno and Betty.

The family would like to offer a sincere thanks to AHN Hospice, his nurse, Tammy, Sue, Mylee, and Chaplain Wray for their exceptional care.

In lieu of flowers, memorial contributions may be made to the Washington Area Humane Society.

View and sign the family's guest book at pittsburghcremation.com.


Published by Observer-Reporter on Nov. 29, 2021.
To plant trees in memory, please visit the Sympathy Store.
MEMORIAL EVENTS
Nov
30
Visitation
2:00p.m. - 5:00p.m.
Pittsburgh Cremation & Funeral Care - McMurray
3287 Washington Rd., McMurray, PA
Funeral services provided by:
Pittsburgh Cremation & Funeral Care - McMurray
MAKE A DONATION
MEMORIES & CONDOLENCES
1 Entry
My condolences to the family. Uncle Chick was a wonderful man. I loved listening to him watching games when my parents took me to visit. First time I remember getting in trouble was mocking him swearing at a player. He is where he wants to be, right by Aunt Bettys side and Resting in the presence of God.
Peggy Gamble White
December 1, 2021
Showing 1 - 1 of 1 results