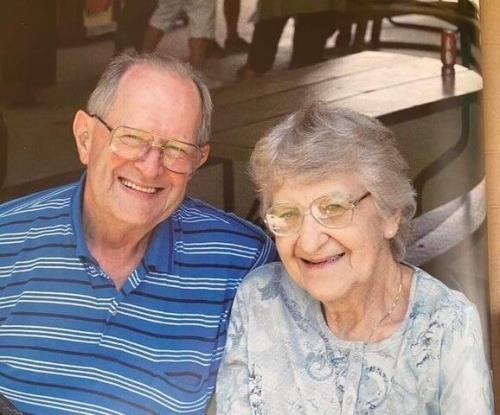 Dolores was born on December 29, 1929, the daughter of Louis and Eva Kanzius Aquilino.

Samuel was born August 29, 1932, in Norristown the son of Samuel F. and Mary Kauffman Mayberry, Jr.

After graduating from Canonsburg High School in 1947, Dolores worked as a secretary in Pittsburgh, Houston, and Washington Hospital from where she retired.

After graduating high school, Samuel went into the radio repair business, then computer repair business and ultimately worked for Washington Steel as a maintenance supervisor from where he retired after twenty-five years of service.

Dolores was an avid reader and loved doing crossword puzzles. She collected blue glassware and enjoyed taking walks on their property where she had planted a forest of trees.

Samuel was intensely curious about everything mechanical, and electronic devices, ham radio equipment and would build oddball and mysterious machines such as converting a motorcycle to a diesel engine that ran on French fry grease, made a street legal electric scooter which he then converted to a gas turbine engine.

Dolores is survived by three children Richard (Sharon) Gray, Gary (Sabrina) Gray, Donna (Ray) Smalley; eight grandchildren; 12 great-grandchildren; and one great-great-grandson from a previous marriage; and was preceded in death by her brother, Louis (Emma) Aquilino; and a son, James Gray.

Also surviving is a daughter-in-law, Hope Gray; and a sister-in-law Lois Hewitt.

He was preceded in death by a daughter, Linda M. Mayberry; and two brothers, Al and David Mayberry.

There are many nieces, nephews and cousins that survive.

Funeral arrangements are private. A memorial service will be held at a later date.

Arrangements are in the care of DeAngelo Funeral Home in Washington.

A Tribute Wall is available at www.deangelocare.com.


Published by Observer-Reporter on Nov. 25, 2021.
To plant trees in memory, please visit the Sympathy Store.
MEMORIAL EVENTS
To offer your sympathy during this difficult time, you can now have memorial trees planted in a National Forest in memory of your loved one.
Funeral services provided by:
DeAngelo Funeral Home
MAKE A DONATION
MEMORIES & CONDOLENCES
1 Entry
RIP Mom Mayberry and Sam! Two amazing people with a wonderful family! When ever you saw Sam and Mom Mayberry together you could see the love that they had for each other! It was amazing how much that loved each other! I have been blessed to have them in my life. Prayers to all of the family! Donna my heart goes out to you my friend! RIP Mom Mayberry and Sam! Until we meet again! Love you both!
Joyce Anderson Cochran
November 25, 2021
Showing 1 - 1 of 1 results