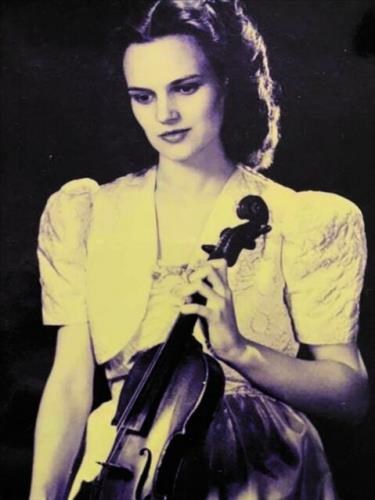 Malvine Lucille Bise Zollars, 96, of Stuart, Va., formerly of Collinsville, Va., and Waynesburg, passed away on October 13, 2021. She loved God and her church, and those two things defined her.

She lived long and lived well and loved God. Because of her love of God and Jesus Christ, she was able to show love and kindness to all those she encountered.

Malvine was born in Cumberland Township, Greene County, on October 2, 1925, to the late Eastman and Slinda Ankrom Bise, descendants of pioneer families of Greene and Fayette Counties.

She was also predeceased by her husband, Richard Gladden Zollars; two daughters, Christine A. Balint and Roberta S. Zollars; and a sister, Viola Santella.

Following graduation from Cumberland Township High School in 1943, she journeyed to Detroit, Michigan and became employed in a defense plant. She studied violin under the concertmaster of the Detroit Symphony. The following year she returned to Waynesburg, and studied violin and completed the requirements for the junior recital program at Waynesburg College. She later played the violin in the California State Symphony Orchestra.

She married Richard Gladden Zollars on February 17, 1945, in Cumberland, Maryland. They were active members of the Greene County Historical Society. They and their friend Dorothy T. Hennen. formed The Cornerstone Genealogical Society, which is still aiding researchers with their family histories. Malvine served as librarian, secretary, and president. She also wrote articles for its publication "Cornerstone Clues."

Malvine was a member of Daughters of the American Revolution – John Corbly Chapter; and Daughters of the American Colonists – Christopher Gist Chapter, serving as regent of both societies, and representing them in state and national assemblies. She was also a member of the Greene County Historical Society, Fayette County Historical Society, and the Greene County Council on the Arts.

Malvine and her husband co-authored a history to aid genealogists, "Marriages Based on Greene Country, Pennsylvania, Records, 1789-1885." In appreciation she was honored with a lifetime membership in the Cornerstone Genealogical Society. She also authored several books on the different surnames of her family history including "Gone but Not Forgotten."

Behm Funeral Home of Waynesburg, are in charge of the arrangements. Burial will be in Greene Mount Cemetery, Waynesburg.

Relatives and friends will be received from 11 a.m. to 1 p.m., the hour of services, Saturday, October 23, 2021, in the Behm Funeral Home, 182 W. High Street, Waynesburg, PA 15370, with the Rev. Melody L. Kimmel officiating. Interment will follow in Greene Mount Cemetery, Waynesburg.

Condolences may be expressed online at www.behmfh.com.

In lieu of flowers, donations can be made to Fieldale United Methodist Church, Fieldale, VA or the Cornerstone Genealogical Society, Waynesburg, PA.