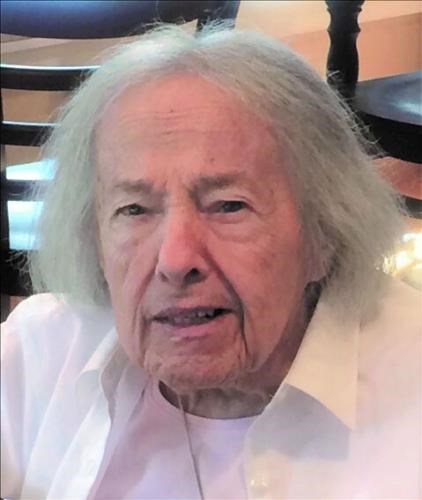 Martha Victoria Hrutkay Bussey, 87, of Arlington, Va., passed away peacefully, of natural causes, Thursday, October 21, 2021, in her home, with family by her side.

She was born March 9, 1934, in Bentleyville, the youngest of nine children of the late Joseph Hrutkay and Victoria Kuberka Hrutkay.

Martha grew up on the family farm in Scenery Hill, and graduated from Bentleyville High School in 1952. Inspired by trips with her brother, Charles "Carl" to Pittsburgh Airport to watch the airplanes take off and land, she dreamt of a life in the sky. In pursuit of her dream, Martha moved from the area to Charlotte, N.C., to work as a stewardess for Eastern Air Lines in May of 1955. She subsequently transferred with Eastern to New Orleans, La.

Her future husband, the late Thomas Alan Bussey of Atlanta, Ga., was a regular passenger on one of her routes from Charlotte. Martha and Alan were married in December 1957, in Salt Lake City, Utah, where Alan was based at the time for the Campbell Soup Company. Martha continued to work after her marriage for United Airlines in Salt Lake City. Over the next 10 years, Martha and Alan went on an adventure that took them from coast to coast as his company transferred them around the country.

They first moved from Salt Lake to Sherman Oaks, Calif., where Martha continued to work for United. Thereafter, they were transferred to Clearwater, Fla., where their first son, Donald Alan Bussey (59), of Arlington Heights, Ill., was born. After Florida, they moved to Dallas, Texas, and Torrance, Calif. While residing in Claremont, Calif., their second son, Brian Arnett Bussey (56), was born. They eventually settled in Arlington Heights, Ill., in 1967. Martha lived there for almost 52 years, always close to her older son, Donald. After losing her husband in January 1988, Martha returned to work as a real estate agent for nearly 10 years.

In February 2018, Martha moved to Arlington to live with her younger son, Brian, his wife, Carol Stevens Bussey, and her grandson, Hamilton John Arnett Bussey (18), of Harrisonburg, Va., and Arlington.

Martha was happiest surrounded by her family, and while gardening among the flowers and bird watching.

In addition to her two sons, daughter-in-law, and grandson, she is survived by a host of nieces and nephews and their children and grandchildren.

She is the last of her generation of Hrutkays and their spouses. Martha's death marks the passing of a generational story that started with her parents, Joseph and Victoria, immigrating to the United States from central Europe in the early 1900s. Hope led them halfway across the world, and through hard work, her parents made a life for themselves, their children, and their posterity in their adopted land.

Family and friends will be received from 5 to 8 p.m. Friday, October 29, in Greenlee Funeral Home, 619 Main Street, Bentleyville, PA 15314, where a blessing service will be held at 10 a.m. Saturday, October 30, with the Rev. Edward Yuhas officiating. Interment will follow in Sacred Heart Catholic Cemetery, Monongahela. All are welcome.

A guest book and personal condolences may be accessed at www.GreenleeFuneralHome.com.