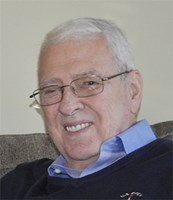 Daniel P. Etnyre
Died: September 26, 2021
Daniel P. Etnyre, 83, of Lancaster, Pennsylvania, passed away on Sunday, September 26, 2021.
Born in Rockford, IL and raised in Oregon, IL, he was the son of the late Samuel R. and Georgene Ferguson Etnyre. He graduated from Oregon High School and attended the University of Colorado.
From the 1960s to the 1980s, Dan was the Mid-Atlantic Sales Manager for E.D. Etnyre & Co., his family's road-building equipment manufacturing and distributing company. Following his time with the Etnyre Company, he remained in sales before retiring in 2015.
In his early years, Dan was a scratch golfer, and he continued to have a lifelong interest in golf. He enjoyed all sports and was a committed Philadelphia Phillies and Penn State Football fan. Spending an afternoon watching a game with his family was his favorite weekend pastime. Additionally, he was a passionate and perseverant New York Times crossword puzzle solver. He thrived on solving problems and with his engineering-like mind, he was an expert in organizing closets and storage areas, and he was a meticulous gift-wrapper! He will be remembered for his mischievous smile, deep belly laugh, generosity, and his sincere devotion to his family and friends.
He is preceded in death by his daughter, Kelly Etnyre Williams and his sister, Bitsy Hunter.
He is survived by his children, Daniel Etnyre, Jr., Kim Etnyre, Michael Etnyre, Wendy Lewis, and Jennifer Pradziad and her husband John, his sister, Ginger Smalley, his ten grandchildren, and five great-grandchildren.
Services will be private and at the convenience of the family. In lieu of flowers, please make a honorary donation to a favorite charity. To send a condolence, please visit SnyderFuneralHome.com.
Published by Ogle County News from Oct. 5 to Oct. 8, 2021.
To plant trees in memory, please visit the Sympathy Store.
MEMORIAL EVENTS
To offer your sympathy during this difficult time, you can now have memorial trees planted in a National Forest in memory of your loved one.
MAKE A DONATION
Please consider a donation as requested by the family.
MEMORIES & CONDOLENCES
1 Entry
Dan will always be here, in my mind. I had known him for 60 years. His leave-taking was a great shock. He was a special and kind person, who could always make me laugh. I will miss him horribly in this life, as I know his family will. Forever onward, Dan!
Sally Wortman
Family
October 7, 2021
Showing 1 - 1 of 1 results