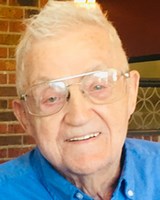 BORN
1925
DIED
2021
FUNERAL HOME
Farrell-Holland-Gale Funeral Home
110 South Seventh Street
Oregon, IL
Edwin E. Smith
Born: July 16, 1925 in Piqua, OH
Died: June 25, 2021 in Long Island, NY
Edwin E. Smith, 95, longtime Oregon resident, passed away, peacefully, on Friday, June 25, 2021. He died like he lived, with dignity. He was staying with his daughter, Linda Rundlett, on Long Island New York when he passed.
Edwin came from humble beginnings, born in Piqua, Ohio, living with his mother, Edna, and brother Richard. As a young child of divorce, they lived with their grandfather on his farm. This is where Edwin learned the lessons of hard work and the value of a dollar. Working from sunup to sundown taught him one thing: He wasn't cut out to be a farmer. This knowledge launched him into higher learning, where he moved to Oregon and attended Oregon Bible College. He married Mary Lou Potts on January 2, 1945, in Richmond, Indiana. They had two children, Eddie and Linda. Early in his career, Edwin's job took him, his wife Mary Lou and their two small children to California for several years, where they established many lifelong friendships. In 1963, they settled in Oregon, Illinois where he lived for 58 years. Edwin had a long career at E.D. Etnyre & Co., where he began in the machine shop, but after a couple of weeks there, was asked to "come into the office" where they offered him a desk job, accordingly with his kind personality, sharp skills and engineer's mindset. In the late '60s, he secured a million-dollar Army contract for Etnyre's, for a fleet of trucks, and traveled with Roger Etnyre to St. Louis to sign the paperwork. Edwin set up the first data-processing computer center used at Etnyre's, and secured a staff who truly enjoyed working for him. After 38 years at Etnyre's, Edwin retired and went on to work for UniSys Corporation for several years, traveling to Green Bay, Wisconsin, to work as Tech Support for their computer systems. After the loss of Mary Lou, he married Joan Hall, of Grand Rapids, MI, on October 26, 1991. They shared 20 happy years, and enjoyed traveling, family get-togethers and just being with one another.
Edwin always had a mind for business but raised his family in a loving, humble and purposeful way, never needing to be the center of attention, allowing others around him to shine. In his later years, what made him happiest were visits from family, friends, his iPad, news channel and lift chair. He never asked for a thing, but was always willing to give anything he had to help others.
A Life Well Lived……..
Edwin is survived by his daughter, Linda (Smith) Rundlett, Wading River, New York; four stepchildren, Ken Hall, Phoenix, AZ, Connie Ramsey, Front Royal, VA, Gail Bratcher, Milan, TN, and Kerry Hall, Rockford, Illinois; sister Zola Jayne Schnelle, Vandalia, Ohio; brothers, Richard, West Milton, Ohio, Terry Smith, Tipp City, Ohio, Norman "Butch" Smith, Vandalia, Ohio, and Gary Smith, Guntersville, Alabama; as well as several loving nieces and nephews all across the country.
He was predeceased by his wife of 48 years, Mary Lou, who passed away in 1991. He then married Joan Hall, who predeceased him in 2012. He was also predeceased by his son, Eddie Smith Jr., Dixon, IL, stepson Ray Hall, Grand Rapids, MI, sisters Carole Temple, Dayton, Ohio, Jackie Smith and Susie Hornbeck, both of Vandalia, Ohio.
A Memorial Service will be held on Saturday, July 31, at 11 a.m. at Farrell-Holland-Gale Funeral Home, Oregon, Pastor Michael Hoffman officiating, followed by Interment in Riverview Cemetery. A luncheon will follow for family and friends at Maxson Manor Restaurant.
In lieu of flowers, please donate to a charity of your choice.
To plant trees in memory, please visit our Sympathy Store.
Published by Ogle County News from Jul. 20 to Jul. 30, 2021.
MEMORIAL EVENTS
Jul
31
Memorial service
11:00a.m.
Farrell Holland Gale Funeral Home
110 South 7th Street, Oregon, IL
Funeral services provided by:
Farrell-Holland-Gale Funeral Home
MAKE A DONATION
Please consider a donation as requested by the family.
MEMORIES & CONDOLENCES
Sponsored by Farrell-Holland-Gale Funeral Home Oregon Chapel.
0 Entries
Be the first to post a memory or condolences.