His writing career was launched after winning the Julie and Avery Hopwood Award for Fiction (1954) as a student at the University of Michigan where he received his B.A. (1953) and M.A. (1955) degrees. Novels published by Farrar, Strauss and Giroux were Ladies of the Rachmaninoff Eyes, Blood of Strawberries, and Dead Piano; Lunacy and Caprice was published by Ballantine.

Mr. Van Dyke interrupted his university studies to serve two years (1948 - 1950) in the U.S. Army stationed in Germany. He was a resident of Manhattan throughout his adult life and taught a semester annually between 1970 and 1990 as writer-in-residence at Kent State University where he developed many friendships.

Published by Akron Beacon Journal on Jan. 8, 2012.
To plant trees in memory, please visit the Sympathy Store.
MEMORIAL EVENTS
To offer your sympathy during this difficult time, you can now have memorial trees planted in a National Forest in memory of your loved one.
MAKE A DONATION
MEMORIES & CONDOLENCES
4 Entries
Forgot to add my name, I'm the one whose playing chess in the picture above-Arthur Diovanni
September 27, 2012 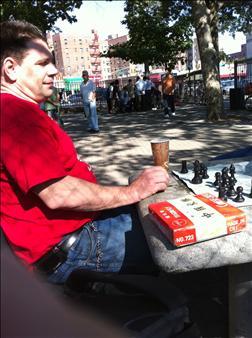 The one person in the world who I owe my entire life to, wish I knew about his memorial. Henry was an inspirational source for all those people whose souls he touch-if Robert frost grabbed life by its throat when he wrote poetry, then Henry Van Dyke grabbed life by its soul when he wrote short stories and fiction. He taught me to believe in the characters of an authorship, for they would stand up and show us who they are!! I would never had been a teacher myself if this Henry hadn't graced me with his inspirations-you will be missed-but always live on in my memories!
September 27, 2012
With grace, wit, and astute observations, Henry Van Dyke nurtured me as a creative writing student during my student days at Kent State (1986-1990). I will always appreciate his kindness and guidance on my Senior Honors Thesis Project, a short novel. My condolences to the friends and family of HVD (as he often etched at the end of my story drafts).
Eric Gardner
February 4, 2012
An extraordinary life! Though coming from out of town, Henry Van Dyke was the consummate sophisticated New Yorker whose little black book reads like a cultural who's who -- Patricia Neal, Bobby Short, Leontyne Price, Gore Vidal, etc. Watch out for his memoirs that he left in a near-completed state.
January 9, 2012
Showing 1 - 4 of 4 results