Published by Oklahoman on Mar. 16, 2014.
To plant trees in memory, please visit our Sympathy Store.
MEMORIAL EVENTS
To offer your sympathy during this difficult time, you can now have memorial trees planted in a National Forest in memory of your loved one.
Funeral services provided by:
Corbett Funeral & Cremation Service
MAKE A DONATION
MEMORIES & CONDOLENCES
22 Entries
She sounds like a wonderful and human person. Wish I could have known her. Condolences to you, Tim, and your family.
Rob Colbert
March 19, 2014
Thinking of you and your family. Praying for love, hope and peace to help strengthen you during this unexpected passing of a wonderful loving mother, grandmother and friend. God Bless you all!
Karla Wallace
March 18, 2014
Tim, Kelly, Shannon & family -
We are so sorry for your loss. Our deepest sympathy and prayers are with you during this difficult time. -Sue Burchfield & Ashlee Elersic
March 18, 2014
my heart goes out to your entire family. Patsy raised some incredible and amazing children. Her spirit shows through in all of their lives.
Tami Collins
March 18, 2014 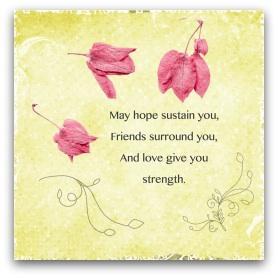 Lori Zamorano-Good
March 17, 2014
Kelly, Cindy and Family you are in our thought and prayers.
Amanda Hammond
March 17, 2014
Kelly, you and your family are always on my mind these days. May you find peace in the love that surrounds you.
Peggy Johnson
March 17, 2014
Kelly & Cindy - I'm so sorry for your loss. I'm thinking of both of you. Big hugs to you.
Karen Harris
March 17, 2014
Thinking of you and your family at this time Kelly. I didn't know your mom, but I know you and you are a testimony to her.... she raised an awesome daughter and that speaks volumes of her....
Veta Bordeaux
March 17, 2014
To my friend-on-the-road Tim: Your mom must have been an amazing woman to have raised such an incredible son. Praying for the kind of peace and strength that surpasses all understanding. Lifting up you and your family, with love -
Kari Isaeff
March 17, 2014
Our hearts go out to the family of such a wonderful lady. She will be deeply missed by us and our family dog, Adie, she so lovingly cared for.
Bob & Karen Willsey
March 16, 2014
I am making a contribution to the Humane Society of Greater Dayton in Patsy Ryan`s name, happily knowing that 2 dear men who loved her, lived here with their dog.
Barb Blauman
March 16, 2014
We are raising money for a memorial park bench at Paw Park, the Oklahoma City dog park. The bench will be solid concrete with a commemorative plaque with Patsy's name and a message. Hundreds of people every week will enjoy the sunshine and fresh air with their beloved pets, and rest on Patsy's bench while their dogs play. We believe this would make Patsy very happy. http://www.gofundme.com/patsyryan
Stacie Stewart
March 16, 2014
Tim, I'm so very sorry for your loss.
Ruth Johnson
March 16, 2014
I am so sorry to hear this....my prayers for your family for strength and peace during this time. She was a person with such a big heart.
March 16, 2014
Patsy was one of my precious forever friends. Loved her so much and will miss her.
Karen Tyree
March 16, 2014
My thoughts and prayers are and have been for Patsy's family and many friends. When I was a neighbor, she always stopped or waved. She was so loving and kind to everyone. Everyone loved Patsy.
Debbie Nance
March 16, 2014
Prayers for you and your family. Diane
March 16, 2014
I am deeply sorry for the loss of this fine woman.
Joie Soske
March 16, 2014
My precious Kelly, so sorry to hear of your Mother's departure. I went to high school with Patsy and what a wonderful person, so happy,so friendly, so welcoming. I send my deepest condolences. Nancy Castleberry
Nancy Castleberry
March 16, 2014
Peace be with you all...
Mandi Heldreth
March 16, 2014
Our thoughts and prayers are with you in your time of grief. May your memories bring you comfort.
Lori Hubbard-Simms
March 16, 2014
Showing 1 - 22 of 22 results