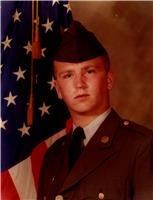 ANGELICA --- David G. Barnett of 172 Olean Street went home to be with his Lord and Savior on Friday, August 13, 2021 in Nunda. He was born on October 18, 1964 in Warsaw, a son of the late Gordon and Joan VanOcker Barnett. He married his High School sweetheart Suzanne Borden who survives.

David was a veteran of the United States Army serving from 1982 to 1986. He was a former employee for Local 3 of Rochester and Local 9 of Buffalo as well as a former member of the Dalton American Legion.

He loved hunting and tinkering around the house but most of all he loved spending time with his grandchildren especially taking pictures with them.

Surviving in addition to his wife and companion of 45 years are their children, Samatha Barnett of Belmont, Michael (Christel) Barnett of Angelica, four grandchildren, Ian, Kaydence, Olivia, and Sophia Barnett, a brother, Joel (Julie) Barnett of Lamont, two aunts, Linda VanOcker of Akron, Alice Heightman of Delevan, his mother and father in law, Joseph and Sandra Borden of Greece and several brothers-in-law, sisters-in-law, nieces and nephews.