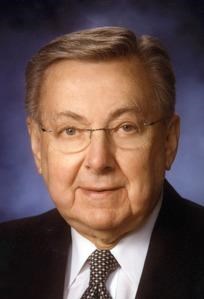 Dr. Harold Phillip Kreski was born on August 23, 1927, in Columbus, Nebraska, to parents, Phillip and Anna Krzycki. He grew up on a farm outside of Columbus with one older sister, Virginia. He attended St. Bonaventure High School in Columbus and served as a Corporal in the United States Army. He attained degrees from Creighton University's School of Dentistry and Iowa University for periodontistry.

On December 28, 1957, he married Joyce Bruckner of Platte Center, Nebraska, at St. John Catholic Church on the campus of Creighton University. Together they had four sons: Phil, Joe, John, and Chris. After graduating from Creighton University, he started his general dentistry practice in Woodbine, Iowa, and changed his last name to simplify the spelling, although he never forgot his Polish heritage. He then went to Iowa University to specialize in periodontistry and moved to Omaha after he graduated, which allowed him to teach dentistry at Creighton University until his private practice became established. While teaching, he became Chairman of the Department of Periodontology at Creighton University for seven years, after which he retired from teaching to focus solely on his practice. He was an active member in the local American Dental Association and the American Academy of Periodontology. He continued his practice for more than 45 years, retiring when he was 80 years old.

Dr. Kreski was on the Madonna School Board of Directors from 1972 to 1988 and served as President of the Board from 1977 to 1987. He was involved in the Knights of Columbus, Poor Clares, and Ancient Order of Hibernians charities on various volunteering and fundraising projects. He was a past President of Omaha Dental Society and recipient of the Creighton Alumni Dental Award. He also served on the MOSIAC Parent Association Board as well as a being a member of the religious Equestrian Order of the Holy Sepulchre of Jerusalem. He was very involved in St. Margaret Mary Parish, where he was a member for more than 60 years.

Dr. Kreski enjoyed fishing, golf, and tennis with his close life-long friends, many of whom were also dentists, and especially enjoyed his time with his sister's family, including many yearly reunions. He followed many sports, but his favorite was Creighton basketball. Most of all, he loved spending time with his family and grandchildren, whom he loved so dearly. He was preceded in death by his wife, Joyce; son, Christopher; and sister, Virginia Ernst (Carl). He is survived by sons: Phil (Denise), Joe (Susan), and John; grandchildren: Claire, Rachael, Nicholas, John Michael, Sara, Jillian, and Natalie; many nieces and nephews. Harold was 93 years old and passed away due to complications from Parkinson's Disease.

To view a live broadcast of the Mass, go to www.heafeyheafey.com and click the "View Live Service" button on the homepage.

To plant trees in memory, please visit our Sympathy Store.
Published by Omaha World-Herald from Nov. 22 to Nov. 26, 2020.
MEMORIAL EVENTS
Nov
27
Service
10:00a.m.
St. Margaret Mary Church
Funeral services provided by:
Heafey Hoffmann Dworak Cutler Mrts & Crematory
GUEST BOOK
3 Entries
My thoughts and prayers are with your family. I was Chris's case manager at Mosaic. I was able to get to know your Father very well. Along with Chris, your Father was the sweetest person. God Bless you all.
Renee McAllister
November 23, 2020
Thank you for your Service May you be granted an honorable and Restful Peace
Francis Durham VFW Dist 10 Chaplain
November 23, 2020
Phil Prayers to all the Kreski's fromt he Finocchiaro family in Phoenix.
louis g finocchiaro
November 23, 2020