FUNERAL HOME
Click Funeral Home & Cremations
9020 Middlebrook Pike
Knoxville, TN
Ennenga, James Lewis
Age 90
James Lewis Ennenga, P.E., of Knoxville, TN, formerly of Omaha, NE, died peacefully at home on August 2, 2013, with his family at his side. Born on April 4, 1923 in Lennox, SD, to Henry and Nettie (Loomer) Ennenga, he grew up in Rapid City, SD. Mr. Ennenga graduated from the South Dakota School of Mines in Civil Engineering, and received his Master's Degree from the University of Nebraska-Omaha. He served in the U.S. Navy from 1944 to 1946, and was part of the liberation of the Philippine Islands. He was married with love to Mary Ruth Sherrell on June 20, 1948 in Gary, IN, and Jim and Ruth raised their 5 daughters in Omaha. Mr. Ennenga had a long career with the U.S. Army Corps of Engineers, Omaha District, and after retiring in 1978, taught Construction Management at the University of Nebraska-Lincoln, retiring as an Associate Professor, Emeritus in 1988. After his retirement, Mr. and Mrs. Ennenga moved to Knoxville, TN, where they were members of Bethel United Methodist Church, where he served as lay leader. Mr. Ennenga enjoyed traveling back to cheer the Nebraska Corn-huskers football team and the UNO hockey teams. Jim Ennenga was one of those rare individuals who pack more interests and living into life than most of us. He was a Master Mason for 70 years, and a member of both Rapid City Lodge #20 and Powell, TN Lodge #582. He was a rock hound, lapidarian, and a master silver and gold smith, who enjoyed presenting his wife and daughters with stunning and original pieces of jewelry. An Eagle Scout, Mr. Ennenga supported Scouting all his life, and guided many young men to become Eagle Scouts. He was an avid gardener, and enjoyed growing and hybridizing irises, including "Ruthie Girl", named for his wife; "Heather Ann", "Erin Anne", "Nettie Leonetti", and his most recent introduction, "Oxmoor Hills", a dark purple iris that blooms 3 to 4 times each year. Ennenga was an Iris Judge and member of the Omaha and Eastern Tennessee Iris Societies. He also was an accomplished vintner, and his family and friends enjoyed his wines and his extraordinary champagnes. One of his favorite hobbies, indeed avocations, was collecting apple parers and he was well known as "Apple Jim" to his Apple Parer Enthusiasts (APES) buddies. He enjoyed hunting, fly fishing, tying flies, and camping in the Black Hills of South Dakota his entire life. He was a Charter member of the Eastern Nebraska Gun Club, and a lifetime member of the National Rifle Association, and also a fine gunsmith who was particularly good at gun checkering. He kept bees for more than 30 years in Omaha, and no other honey could match the taste of the fine clover honeys his bees produced over the years. He also was a ham radio operator (call sign K0GOC) and welder. In his later years, he developed an expertise in fountain pen repair, and especially enjoyed the fine Estebrook fountain pens. Surviving him are his wife, Ruth, with whom he recently celebrated 65 years of marriage; daughters, Mary (Larry) Richling of Omaha, Wilma (aka Winnie) Ennenga of Flagstaff, AZ, Susan (Randy) Haskell of Columbus, NE, and Diana Jeanne Thraen of Knoxville, TN; grandchildren, Erin Richling, Sarah Haskell, Emily Thraen, Bradley Richling, and Paul Haskell; great grandsons, Connor and Callan Haskell; and many nieces and nephews, including, Todd (Dani) Ennenga, Kathy (Ted) Otto, Shirley (Frank) Mann, Loretta Tolliver, Billy (Amy) Sherrell, Jimmy (Kimberly) Sherrell, Kenny (Anne) Parker; and Joel (LaVerne) Parker and many more grand-nieces and nephews. Mr. Ennenga was preceded in death by his parents; brothers, Benjamin and Benard Arthur Ennenga; his daughter Nettie Leonetti; and granddaughter, Heather Richling.
VISITATION: The family will Receive friends and relatives 5-7pm on Sunday, August 4, at Click Funeral Home on Middlebrook Pike, with Sermon by Reverend Jack Sills from Bethel Methodist Church, followed by a Masonic Service. INTERMENT: Family and friends will gather for GRAVESIDE SERVICES on Thursday, August 8, at 1pm in the Lennox, SD Cemetery. He will be buried with full Military Honors by the Navy Honor Guard, and Interred in the family plot. In lieu of flowers, donations can be made in memory of Jim to Bethel UMC, 5955 West Emory Road, Knoxville, TN 37931. CLICK FUNERAL HOME
MIDDLEBROOK CHAPEL
9020 Middlebrook Pike
Knoxville, TN 37923
865-694-3500
www.clickfh.com

This obituary was originally published in the Omaha World-Herald.
Published by Omaha World-Herald on Aug. 4, 2013.
To plant trees in memory, please visit the Sympathy Store.
MEMORIAL EVENTS
To offer your sympathy during this difficult time, you can now have memorial trees planted in a National Forest in memory of your loved one.
Funeral services provided by:
Click Funeral Home & Cremations
MAKE A DONATION
MEMORIES & CONDOLENCES
Sponsored by Diana Jeanne Ennenga Thraen.
17 Entries
Diana J. Thraen
August 3, 2020
My Dear Daddy, I believe you are watching over your family and already know our plans. If perhaps you receive messages on the wings of Eagles, this one is from your Gingo (Jean Go). After many years I think I figured out where that nick name came from; I must have always been asking you if I could go with you. I sorted pictures getting ready for my move back to Omaha and came across the pictures of you and me trout fishing that stream up by Rochester that you knew was off the beaten path. I remember you pulling two large trout out of that pool I was working on to get our limit for the day. You teased me saying 'Gingo, it is all in the presentation of the bait'. I love and miss you Daddy and think of you often. Your Gingo (Diana Jeanne
May 18, 2018
Jim: I will always remember your friendship and helpful nature. Your youthful spirit and openness were impressive. I am glad we were classmates in engineering and worked on class projects together. R. Rao Boppana, Los Angeles
May 17, 2018 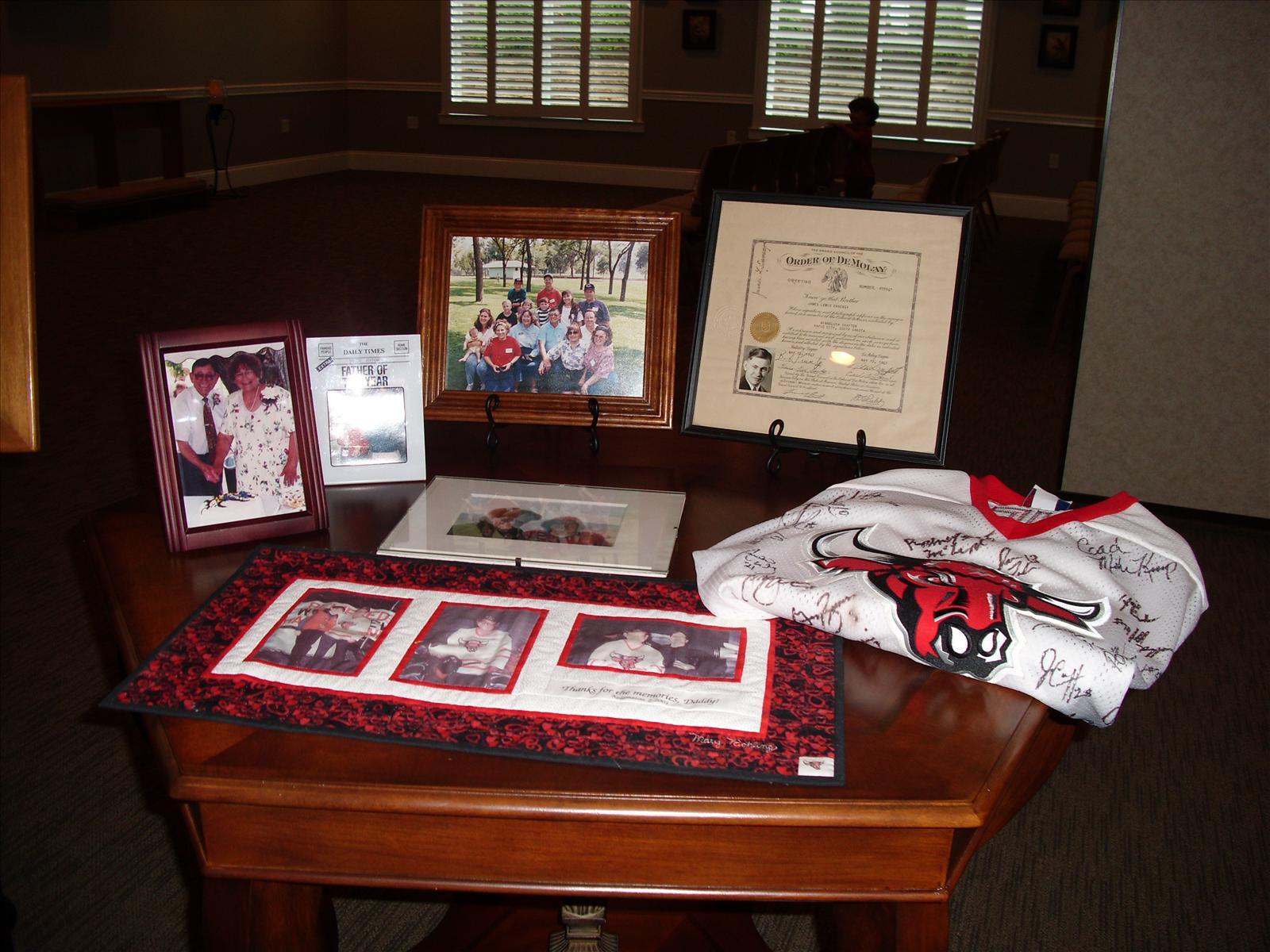 Happy Birthday Daddy. I remember you often and am forever thankful to have had you in my life. Love, Your Gingo
April 4, 2014
Aunt Ruth and girls, I know how you miss your father!I admired the way he never gave up and kept going! Just treasure the family you still have, it is never the same after one is gone. I miss little Nettie too! God Bless
Loretta Toliver
November 11, 2013
Thinking of you Daddy; remembering how blessed I was and am to have had you for my Parent, Father, Daddy, and Friend. DJ
November 7, 2013
Jim, you went away two weeks ago, but it seems like you are still here at home with us. The house is so silent, but in our memories we see your smiling face and remember the good times we shared when we laughed and talked together. Ruthie Girl
August 21, 2013
Ruth and family, I was saddened by this news, but so happy to say I got to experience Jim's incredible contagious smile at an early age. My entire family sends their condolences during this difficult time. Our prayers are with all of you and keep smiling Jim.
Tom, Deb, Tommy Hintz, Linda and girls Short, Carole and Wally Olson family
August 12, 2013
Dear Mary and Larry, I was saddened to read of Jim's passing, what a wonderful tribute to him it was. I have many pleasant memories of visits at your parent's home. My symphany to Ruth and the family.
Mary Jo Havlicek, Omaha, NE
August 7, 2013
Good Bye Jim. Save a good seat for us when you get there.
Dan & Irene Isbell
August 5, 2013
My thoughts and prayers to the Ennenga family. Mr.Ennenga was such a pleasure to know. He will be missed.
Gail Amatangelo
August 5, 2013
My sincere condolences to the entire family.
Barry Lee
August 4, 2013
Thanks for your Military Service to Our Country.
Past Commander V.F.W.
Bill Fead
August 4, 2013
I will miss you, Jim. Much love to Ruth and the rest of the family.
Linda Mann
August 4, 2013
Dear Ennenga Family,Friends, Just got the word a few min ago, I am so sorry to hear the news. Jim and Ruth raised a really good family. Was nice to know Jim over the years, he was always there to help you. We had such good times talking about old Navy days, I was in long after him but he and I had been to many of the same places in the Phlippines. As I write this I have on a tiger eye ring he made
me when I was in High School. Still really neat! Worked with his girls at Peony Park, went to Westside High School with them too. We all will miss Big Jim.