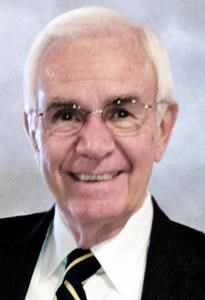 Jan was reunited with his beloved wife, Dolores, on April 3, 2021. Born in Omaha, Nebraska on December 5, 1932 to Deon and Ava DeSmet. Preceded in death by his parents; a sister; and his wife, Dolores. Survived by daughters: Renee, Deanna (Jim), Michele, and Robyn (Mike); five grandchildren and one great-grandson.

A 58-year insurance veteran and a trailblazer in the industry, Jan was the former Executive Vice President of the Harry A. Koch Co. and the founder and former President of DeSmet & Associates, Inc. Professionally, he was best known for his commitment to providing his many clients with sound and creative insurance solutions and advice. He was equally dedicated to being a mentor.

Jan served on numerous boards, was a member and past president of Omaha Suburban Rotary as well as past president of Omaha Westside Swim Club. Jan and Dolores were members of Christ the King Catholic Church for over 60 years. He was deeply patriotic and served as a 2nd Class Petty Officer in the United States Coast Guard during the Korean War. He recently wrote a story about his many adventures and rescue missions which will be cherished by his family forever. He was also a gifted artist and his beautiful oil paintings adorn the homes of those he loved. Above all, what defined Jan the most was his love and devotion to his family.

To plant trees in memory, please visit our Sympathy Store.
Published by Omaha World-Herald from Apr. 5 to Apr. 7, 2021.
MEMORIAL EVENTS
No memorial events are currently scheduled.
To offer your sympathy during this difficult time, you can now have memorial trees planted in a National Forest in memory of your loved one.
Funeral services provided by:
Heafey Hoffmann Dworak Cutler Mrts & Crematory
GUEST BOOK
Sponsored by Heafey Hoffmann Dworak Cutler Mrts & Crematory.
5 Entries
Thank you for your Service May the Guardians of the heavenly coastline Grant you as a Semper Paratus an Honorable and smooth Journey to a Restful Peace
Francis Durham VFW Dist 10 Chaplain
April 13, 2021
Jan was a great man and a great mentor. He will be sorely missed by all who knew him.
Daniel Koch
April 7, 2021
Jan and Dee were our neighbors at Cambridge Oaks! Lovely neighbors , and wonderful people! In my thoughts and prayers!
Terry and Liz Foxhoven
April 6, 2021
Love & prayers to your family. I´m so sorry for your loss, Jan was such a wonderful, caring man.
Mary Nebe
April 5, 2021
Dear Michele, Rene and family, Jan will always , always be remembered by our family as going above and beyond making certain that the right thing was being done and to assure insurance matters were handled properly when Dan, was ill. Jan was a customer of Dan's many years ago and Dan respected Jan as a true gentleman, which he proved in every way when going to bat for Dan's welfare. Friends like that cross our paths once in a lifetime and we were blessed by his friendship, and are eternally grateful. Our families thoughts and prayers are with you all of you. Fondly remembering Jan, God Bless and Keep you in his loving care!
Gail E Briggs
April 5, 2021