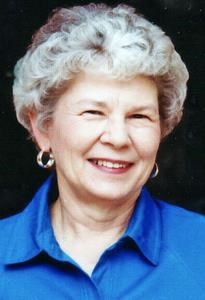 Elma Joyce Shanks "Joyce", was born on October 26, 1927, in Springfield, MO to Hazel Case Selvidge and Grover B. Selvidge. She reaped the benefits of her status as an only child born to teachers and flourished as a life-long student and teacher. Childhood summers spent with her maternal grandparents on their farm near Jerico Springs, MO created treasured memories that she often shared with her family.

She attended Southwest Missouri State in Springfield, where a tanned young man wearing a sharp white sweater (and newly returned from the Merchant Marines in WWII) caught her eye. Though her parents discouraged her from dating, somehow Jim Shanks and Joyce managed to not only date, but steal away and elope. It is of note that Joyce passed on the date of their 74th wedding anniversary.

Joyce had obtained an English Degree and Teaching Certificate, so after their nuptials, they moved to Portland, OR for her first teaching job.

After a few years, they moved to Colorado so Jim could pursue his Degree in Mechanical Engineering at Boulder. While in Colorado, their first daughter, Julie, was born in 1950. Jim's position with the Corps of Engineers took the family to Omaha in 1958, and in 1960, daughter Sharon was born.

Joyce then acquired a Library Sciences Certificate from the University of Omaha, and served as the librarian at District 66's Westbrook Junior High, and later at Omaha Public School's Monroe Junior High.

Joyce was a devoted mother and grandmother and loved cooking the best of the Jerico Springs farm's traditional meals for her family – especially on Thanksgiving. She also loved music and enjoyed singing in the choir and playing the handbells at First Methodist Church in their early years in Omaha.

After Jim and Joyce retired in 1982, their traveling adventures began with their beloved Airstream group. With their combined abilities to organize and repair, they found opportunities to assist, and both served as officers at various times during their 20 years of membership. They greatly valued the friendships they made in this group.

By her example, Joyce inspired her family to volunteer in service to others, treat all equally, and strive for achievement.

Private Services will be held later. Memorials may be directed to the Mullen Area Community Foundation – Mullen, NE, or the Food Bank for the Heartland - Omaha, NE.
Published by Omaha World-Herald on Dec. 5, 2021.
To plant trees in memory, please visit the Sympathy Store.
MEMORIAL EVENTS
To offer your sympathy during this difficult time, you can now have memorial trees planted in a National Forest in memory of your loved one.
MAKE A DONATION
MEMORIES & CONDOLENCES
3 Entries
Sending our thoughts and prayers to comfort your family during this difficult time of mourning. Deepest Condolences, Westside Human Resources
Westside Community Schools Human Resources
Work
December 9, 2021
I´m one of the older Airstream friends. I really enjoyed knowing Jim and Joyce and enjoyed being with them. My sympathy to the family.
Kay Corder
Friend
December 9, 2021
Your parents were wonderful kind neighbors to us for almost 25 years... Unfortunately once they moved we lost contact with them.. I send prayers and good memories..
Chris and Kathy Tracy
December 5, 2021
Showing 1 - 3 of 3 results