Ginn, Robert W.
Sep 2, 1957 - Aug 14, 2012
Survived by wife of 15 years Anne; parents, William and Sarah Ginn; sister and brother-in-law, Robyn and David Hubbard; brothers Michael and Steven Ginn; sister-in-law Debra; nieces and nephews, Jim and Alexandra Hubbard, Kiera, Caitlin, and Conor Ginn all of Omaha. Predeceased by his faithful Huskie dog Mr. Boo. Bob graduated from Deerfield Academy with honors and from Northwestern University. He attended the University of Nebraska Law College in 1980 and suffered a water skiing accident that summer resulting in quadriplegia. Bob later graduated from Creighton Law School, made law review and became a clerk for The Honorable Arlan Beam. He worked at Kutak Rock and for the Legal Aid Society. He holds masters degrees in Christian Spirituality and Theology from Creighton University. He became a teacher of Centering Prayer and was a Spiritual Director. Bob was affiliated with Sigma Alpha Epsilon, Alpha Sigma Nu and Ignatian Associates.
SERVICES will be held on Saturday at 10:30am at Christ the King Catholic Church. VISITATION will begin at the John A. Gentleman Mortuaries, 72nd Street Chapel at 5pm on Friday, with a Wake Service at 6pm. Bob requested Memorials in lieu of flowers to Craig Hospital Foundation, 3425 South Clarkson Street, Englewood, Colorado, 80113, or Siena/Francis House, 1111 North 17 Omaha, NE. 68102. JOHN A. GENTLEMAN MORTUARIES
72nd STREET CHAPEL
1010 North 72nd St. 402-391-1664
www.johnagentleman.com
To plant trees in memory, please visit our Sympathy Store.
Published by Omaha World-Herald from Aug. 15 to Aug. 18, 2012.
MEMORIAL EVENTS
No memorial events are currently scheduled.
To offer your sympathy during this difficult time, you can now have memorial trees planted in a National Forest in memory of your loved one.
Funeral services provided by:
John A. Gentleman Mortuaries
GUEST BOOK
23 Entries
For many of us, Bob was the lighthouse the kept our ships afloat and on course. An irreverent provocateur, he amused us with his humor and kept us thinking and probing for new answers at the same time. Bob will be sadly missed.
Steven Ginn
August 21, 2012
Your light will shine forever in my heart.
Adelle Smith
August 20, 2012
I am sadden by Bob's passing. I met Bob at Deerfield Academy and remember him fondly. We had many talks and he made me laugh. I was often impressed with his perspective and realized that he was well read and extremely intelligent. I consider Bob a friend.
Colin Hampton
August 19, 2012
Working with Bob and Anne for the past 12 years has enabled me to practice nursing as I truly love. Keeping him out of the hospital and in his home was the goal.

I received as much as I gave. I am truly blessed to have been able to share this life with both Bob and Anne.

Bob once said to me as I jotted down a note for him in my poor penmanship, "some peoples disabilities are not as apparent as others". So true good friend.

Anne, I too will feel a large void in my life. Let us fill it with our wonderful friendship.

May God grant you peace and serenity.
Nancy Beckwith
August 19, 2012
Greetings Anne, The funeral mass for Bob was the best funerals I've ever been to. it was sad and fun all at the same time.
I'm a friend of the family and I must say I was extremely impressed by the love of humor that you all shared. God Bless you and all of the Ginn family.
Joe Fortina
August 18, 2012
I worked for the Ginn family for almost 30 years, and knew the whole family very well. I miss the times I spent taking care of their growing business. Bill taught me many valuable tips in running a business that will always stay with me and my children.
The loss of Bob was no doubt devastaing to the family, as it was to me when I heard the news.
My thoughts and prayers go out to every one close to Bob, and it has given me time to reflect on some very special times in my life.
God Bless
Tom Finch and family
Tom Finch
August 17, 2012
Anne, Bob will be greatly missed. You and the Ginn family are in our prayers during this difficult time.
May you find comfort and strength in the days ahead.
Cary Mohiuddin
August 17, 2012
My thoughts and prayers go out to the Ginn family and friends. Bob you were a great man. A man of courage. Rest in peace and God Bless.
Bernie Tobin
August 17, 2012
"Those we love are with the Lord and the Lord has promised to be with us. If they are with Him and He is with us, they cannot be very far away." Peter Marshall
Anne, I am so very sorry for your loss and was so happy to have met Bob as Adelle adored him. Maria
Maria Volenec
August 17, 2012 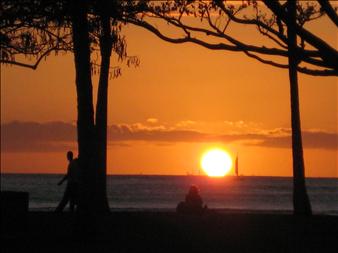 Bob,
You hired me to be your caretaker, but it was likely you who cared for me. Thank you Mr. Ginn. My soul has been blessed by your love and guidance. Your perseverance, determination, courage, adventuring spirit, and eye-rolling humor will stay with me and continue to guide me along my journey.

Anne,
I am so sad for you and pray for you to find the strength you need to find solace and peace in your grief. I imagine Bob swimming alongside you in the ocean, walking alongside you on the beach, and finally carrying you over that threshold. How happy he must be!

You and Bob opened your hearts and home to me. I watched as you strengthened each other. Your love amazed me and gave me hope.

I have several memories I could recount but one of my favorites that I feel truly exemplifies your relationship: You were exhausted driving at night, and suddenly you yelled “Deer!” You slammed on the brakes. Bob's unnerved response was “Yes dear? I'm right here” as we all stared at a Doe and her fawn in the headlights.


Sarah and Bill, Robyn and David, Michael, Steven and Debra,
I express my deepest sympathies to you. Because I know you more through Bob's heart than my own, I know his love for you was immense. May you find comfort in the memories and in the many lives Bob touched throughout his short life.

My heart is heavy because I cannot deliver my sympathies in person. I am with you in spirit and plan to say my good-byes to Bob while watching the sun set over the ocean tomorrow.

Love and hugs,
Heidi
Heidi High
August 16, 2012
My sympathy to William and Sarah. I know that losing a child is one of the worse things parents can go through and I express my deepest sympathy
John Rinker
August 16, 2012
Anne and family: I am so sorry for your loss. I have very fond memories of my visits with Bob over the past few years as I stopped by to care for the pets. Bob and I had many conversations about our beloved dogs and what a special part of your life they become. I am grateful to have known such a special person and fellow animal lover.
Cathy Crowe
August 16, 2012
We were neighbors of the Ginn family when we were growing up in the area of Westside. They are such a kind family--I can remember babysitting the children a few times. My prayers are the entire family.
Karen Nelsen
August 16, 2012
Our prayers and thoughts are with you! We love you. ~Ed Connors and Family~
Ed Connors
August 16, 2012
My thoughts are with the Ginn family...I grew up with the Ginn's and my Mom was close friends with Sarah and Bill. I haven't seen Bob in many many years but was so pleased to see Sarah and Bill a year ago.
Life is so short and hope you carry the many great memories you all had with Bob.
My sincere sympathies to you all.
Trece Rahel O'Donnell, Denver, CO
August 16, 2012 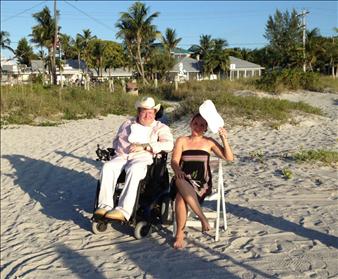 Bob was truly a piece of work. Together, we were incorrigible. Anne knows better than anyone the shenanigans we got into on a daily basis. Bob saved me from myself and loved me in spite of myself. For this, I will always be grateful. I miss him terribly, but will forever be blessed having known him. Goodbye, my friend. May your journey be filled with music, sand, sun, and God.
Adelle Smith
August 16, 2012
Dear Bill, Sarah and Anne,

We are so sorry to hear of your loss. Our most heartfelt sympathies and a prayer for peace at this sad time.
John and Edelene Grier
August 16, 2012
Dear Anne,

Joanie and I offer you and your family our deepest sympathy. I've not witnessed the gift of Acceptance to the extent all of us could readily see in our dear Bob. Most assuredly it has been a "spiritual experience" itself, just meeting and sharing with your late husband. I would confidently hold this man was an "angel on assignment" to many, and an exemplary teacher to all who sought truth. We stand, hurt, and grow in this fellowship. May perpetual light shine upon this gentle servant of God.

Denny & Joanie Cahalan
Denny Cahalan
August 16, 2012
I first met Bob at Gallagher's. I was a waitress, he enjoyed eating. His wit and intelligence beamed out of his eyes and we began a long friendship. He came to the hospital for a few of my stays when I had my children. One time we got lost out int he country as I drove his van, and I don't think he was buckled in very well. He was so proud when his first book of poetry was published. the paper had to be just right. Visiting him was always a pleasure. When he met Anne, it was such a blessing. I am grateful to have known Bob and for Bob to know love with/and to marry Anne. My condolences to Bob's family and friends.
Pam Kohll
August 15, 2012
I am a better person for having known Mr. Ginn. At a time when i was living with selfish abandon, Mr. Ginn taught me what humility, reality and possibilities can truely mean. I would not be the person I am today without his influence. He opened my eyes to great books and great music and i am forever grateful. All my love and sympathy.
Katharine Anderson
August 15, 2012
Bob was a consumate host to the centering prayer meditation group, and gentle faithful guide in spiritual formation. His memory is a blessing.
Grace McGrath
August 15, 2012
Dearest Anne,
Words for the loss of your husband and best friend can not be described. All I know for sure is that Bob has already heard from God, "Well done My good and faithful servant". I'll bet he's seated next to our other great saint Father Tom! You are in my prayers, Anne!
Sherri Sommer
August 15, 2012
Bob was and is a transformative character who brought insight and intelligence to those who were open to receiving. He was a true friend and a friend I miss greatly.
August 15, 2012