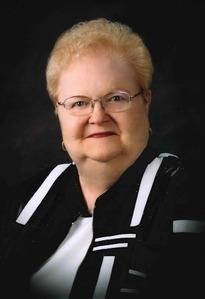 Sharon Lynn Wilson was born in Champaign, IL to Robert Wayne and Jean Ayers Wilson. She moved to Omaha at age eight, and graduated from Central High School in 1957. Sharon continued her education at the University of Iowa where she studied piano and pledged the Alpha Chi Omega sorority. Sharon met her husband Jim at a Masonic Lodge winter dinner-dance. The two were on a blind date arranged by her father. After marrying in 1960, Sharon became an active community volunteer with the Omaha Jaycees and Assistance League. She also served on the Omaha Symphony Auxiliary Board. Later in life, she became a member of PEO Chapter HY. Sharon worked for many years as a secretary at Burke High School. She was an accomplished bridge player and attained Double Life Masters status. She enjoyed competing in bridge tournaments around the country, and had the privilege of playing against the likes of Warren Buffet and Bill Gates. In addition to bridge, Sharon enjoyed cooking, traveling, antiquing, and was an avid reader. Sharon was a loving mother and grandmother who cherished time with her family. She is survived by her husband, James of 60 years; and three children: Julie Trivilino of Omaha (husband, Paul and sons, Michael and Kyle), Jennifer Burrowes of Glenview, IL (son, Colin and daughter, Lindsay), and Jill Moss of Falls Church, VA (husband, Brad and son, Adam); sisters: Joan Gayle Chapin of Omaha (husband, James) and Mary Lee Dingee (husband, Jay) of Fairfield Glade, TN.

In lieu of flowers, the family kindly requests donations be made to The Omaha Symphony, PEO Foundation, or a charity of your choice. A Private Memorial celebrating her life will be held later in 2021 when it is safe to do so.

402-496-9000 www.roedermortuary.com
To plant trees in memory, please visit our Sympathy Store.
Published by Omaha World-Herald on Jan. 10, 2021.
MEMORIAL EVENTS
No memorial events are currently scheduled.
To offer your sympathy during this difficult time, you can now have memorial trees planted in a National Forest in memory of your loved one.
Funeral services provided by:
Roeder Mortuary - 108th Chapel
GUEST BOOK
2 Entries
Our deepest sympathy over the passing of this incredible woman. She certainly lived life to its fullest.
Joyce & Pat Heneghan
January 14, 2021
Please accept my sincere condolences for the death of Sharon- she will be missed!
Joanne Roberts
January 13, 2021