FUNERAL HOME
Lord & Stephens Funeral Home - East Chapel
4355 Lexington Road
Athens, GA
Athens - Milner Ball died April 6 of complications from Parkinson's Disease. He was a Presbyterian minister and emeritus Caldwell Professor of Constitutional Law.
Milner was born April 10, 1936 in Atlanta. He was the son of the late Edward D. and Lucy S. Ball. He was educated in public schools in Georgia and Tennessee, Princeton University (AB), Harvard University (MDiv) and University of Georgia (JD). Following a Fulbright Fellowship, during which time he studied with theologian Karl Barth, he served as minister of the First Presbyterian Church in Manchester, Tenn. and as Presbyterian chaplain at the University of Georgia. After serving as a delegate to the 1968 Democratic Convention, he enrolled in law school and was editor-in-chief of the Georgia Law Review, graduating first in his class. During 1971-72 he worked as Dean Rusk's representative to the United Nations Conference on the Human Environment. He taught from 1972-78 at Rutgers Law School and from 1978-2006 at the University of Georgia . He wrote prolifically and taught in the areas of environmental law, Native American tribal law, jurisprudence, law and theology, and constitutional law. He was the author of four books, including The Word and the Law and Called By Stories: Biblical Sagas and Their Challenge for Law, and published numerous articles in law reviews.
He and his wife, June, enjoyed his teaching assignments in foreign countries. He received a Fulbright professorship to teach in Reykjavik, Iceland and also taught in London, Brussels, Lyon, and Buenos Aires. An avid athlete, he completed--with fast times--28 marathons and many triathlons, and the couple made many backpacking trips and an eight-day dog-sledding trip in Alaska.
An advocate for justice, he was active in the Civil Rights movement and received the Martin Luther King award from the Human Rights Council in Athens. He founded and taught the Public Interest Practicum at the University of Georgia, the Environmental Law Clinic, and the Civil Clinic, and served on the boards of the Athens Justice Project and Community Connection. He was honored to receive, among other awards, the Lifetime Achievement Award in for Law in the Public Interest at UGA and the Lifetime Achievement Award from The Journal of Law and Religion.
Milner Ball is survived by his wife of 51 years, June McCoy Ball; daughters, Sarah Ball-Damberg and Virginia Ball; son, Milner Scott Ball; grandchildren, Hannah and Marika Ball-Damberg, Louise McCormack, and Nora and Milner Ball; son-in-law, Richard Ball-Damberg; and daughter-in-law, Kathryn Lawler.
Services will be held at St. Gregory the Great Episcopal Church at 3 p.m. Monday, April 11. In lieu of flowers, donations in honor of Milner Ball may be made to The Athens Justice Project, 269 N. Jackson Street, Athens, GA 30601; The Ann Downs Loan Repayment Assistance Fund at the University of Georgia School of Law, 225 Herty Drive, Athens, GA 30602; or St. Gregory the Great Episcopal Church, 3195 Barnett Shoals Rd., Athens, GA 30605.
Lord & Stephens Funeral Home East is in charge of arrangements.
To plant trees in memory, please visit our Sympathy Store.
Published by Athens Banner-Herald on Apr. 8, 2011.
MEMORIAL EVENTS
No memorial events are currently scheduled.
To offer your sympathy during this difficult time, you can now have memorial trees planted in a National Forest in memory of your loved one.
Funeral services provided by:
Lord & Stephens Funeral Home - East Chapel
MAKE A DONATION
MEMORIES & CONDOLENCES
26 Entries
i still vividly remember conversations with milner over many years. our offices at the law school were located close together, and we'd frequently discuss "practical" law questions that arose in milner's efforts to help those who needed help. milner fought for the interests of those who especially needed help, and i valued him for that fight. his legacy lives.
jim ponsoldt
Coworker
April 2, 2020
I was for a brief time a law professor at UGA during which time Milner was a student. We instantly got along, so much so that he performed my marriage in a Georgia field with many of my students in attendance. He was immensely helpful and supportive of our efforts for greater minority representation at the law school. Milner was force for good, and Socrates would have been pleased with his work as a teacher. My best to his family.
Steve Ege
October 27, 2012
It was only recently that I learned of Prof. Ball's passing. Considering all of the exotic places that he worked and called home, I consider myself extremely fortunate to have had him as my law school professor during his brief time at Rutgers (Camden, N.J.). There, he taught a wonderful course, the naming of which was pure Milner: "The Limits of the Law as an Instrument for Social Change." And how he pushed us to push those limits. His confidence and courage was camouflaged buy his quiet grace and humility. Law school was not among the favorite periods of my life. But I always looked forward to this class and his thoughtful, inspiring intellect. There have been few heros in my life. Milner Ball was surely one. My thoughts go out to his family.
Robert Keiner
August 28, 2012
Professor Ball was an intellectual giant that strived to help society become more just. I was privileged to be his student at UGA law years ago.
Ted Baggett
May 4, 2011
He was what we all want to be as lawyers, as human beings. Peace to his family and friends.
Debbie Finch
April 13, 2011
Athens has lost a towering figure~ May God bless and keep the Ball Family~~~ Calvin Orlando Smith (Bristol, United Kingdom)
Calvin Smith
April 12, 2011
Milner was a mentor and an inspiration to me. He was so clear that the law embodies our moral and ethical calling, and he was also a great example as a father, spouse and son as well as a citizen of his community and the world. I really appreciate his influence in my life, and wish peace to his wonderful family.
Sam Collier
April 11, 2011 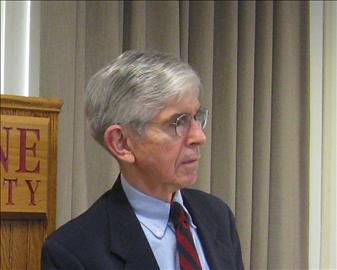 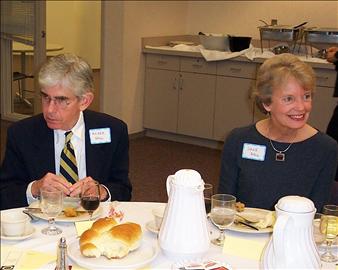 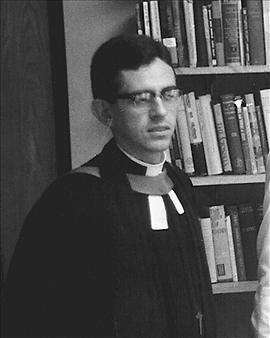 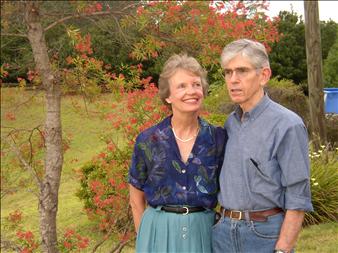 Don Kinsey
April 9, 2011
Our memories of Milner are as one of the fittest people we ever knew. We have very fond memories of time spent with June and Milner.
Don & Barbara Kinsey
April 9, 2011
We will miss Miner's voracious laugh and unbounded generosity of spirit and time. We are very thankful for the time shared with him and June, albeit far too short.

Paula Cooey and Phil Nichols
Paula & Phil Cooey & Nichols
April 9, 2011
Godspeed, Prof. Slip your anchor. The bell tolls for us.
Richard Jack
April 9, 2011
June and family, You are all in my prayers. I have many wonderful memories from childhood when you were all part of our life at Westminster.
Deanie May Fincher
April 9, 2011
My love and condolences to all of Milner's family. He was inspiring, tireless, kind, gentle, gracious. His efforts on behalf of people in need of advocacy will carry on as his influence as an educator and mentor resonates in those who knew him. May he rest in peace.
Michael Lachowski
April 8, 2011
I always enjoyed times at milner and junes house. Was friends with Scott. Wonderful man. Tim Kanouff, eureka, ca
April 8, 2011
Milner was a mentor and pastor. He deeply shaped my life. I treasure him.
Ted Morgan
April 8, 2011
Prof. Ball was of immeasurable help to me in law school. Occasionally maddening, always cheerful, forever challenging. I once joked with him that - given the curved nature of space/time - if some of our political views moved any further apart, we would actually be getting closer to agreement. I am grateful for his immeasurable kindness to me, for his mentoring and his support. A graduate of the Yale Divinity School, he even agreed to perform the wedding service when I married my wife Joan. I count it a great honor to call myself his student and his friend. Like everyone who knew him, I will miss him greatly.
Karl Duff
April 8, 2011
Milner will be greatly missed in Athens and elsewhere. My deepest condolences to June and other family members. He will be remembered with love and devotion by all who knew him
Jim Sherman
April 8, 2011
milner was a good person who made the community a better place. i enjoyed discussing the morality of law with him many times over 30 years and observing him search for the "right thing to do" in the more ambiguous cases.
jim poonsoldt
April 8, 2011
Professor Ball was one of my favorite law school professors. My heartfelt condolences to his family.
Jan Mallory
April 8, 2011
Dr. Ball was one of my teachers at UGA in 1968 and a friend in a time of great need a few years later. He was one of the most remarkable men I have ever had the great good luck to know.
Terry Burger
April 8, 2011
Milner was truly one of the saints on this earth and will be truly missed. My love, thoughts and prayers go out to his family and his many friends.
David Griffeth
April 8, 2011
Offering our deepest condolences during this difficult time.
Lord & Stephens Funeral Homes East Chapel
April 8, 2011
Showing 1 - 26 of 26 results