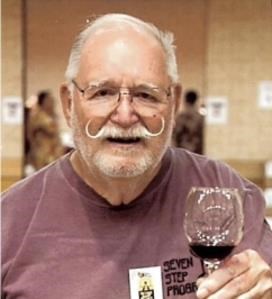 BORN
1924
DIED
2021
November 19, 1924 - August 11, 2021 Cheers! To a life well lived. Born in Dallas, Texas to Robert W. and Louise Heselwood Owen. They called him Allan. The family moved to North Hollywood where he grew up and developed his love for all things California. In 1942, he joined the Navy and became Chuck. He enjoyed his Navy schooling and radar training becoming part of WWII in the Asiatic Pacific earning the ranking of Aviation Chief Electronic Technician. He would say his Navy time established his future career. After the war, he returned to Los Angeles where he met and married fellow lifelong Bruin Vivien G. Webb in 1951. In their 66 years together, they enjoyed the beach, camping, pulling their travel trailer, never missing a UCLA football game, hiking in the mountains, gardening, lots of wine adventures, international trips and cruises, and evening Manhattans together until her death in 2017. Chuck became Charley when he joined Hughes Aircraft in 1950. First working in Culver City and he then relocated to the facility in Fullerton in 1957. Charley spent his entire work career in various job areas of the radar division of Hughes. His memories were of a great working career, many challenging opportunities, lots of stories to share, and many wonderful co-worker friends. He was very fortunate to also have time to enjoy life outside of work. He and Vivien were very active in the Sierra Club. Charley received a Service Award in 1979 for not only leading hikes in the Hundred Peaks Section of the LA Chapter but also serving on their board in the Council and OC Chapter for many years. He was very proud of his hiking accomplishments, having climbed all the listed 100 peaks in California, hiking the Sierra Nevada's John Muir trail and Mt. Whitney, and climbing Mt. Rainier. During all this time he and Vivien never missed the opportunity to attend a UCLA football game, both here or away with fellow alums, and they made lots of friends in their expanding winery trip adventures. In 1979, Charley joined the newly started Orange County Wine Society. He absolutely loved the organization and was a part of every aspect of its growth. If there was an event or project to do he was usually there. The Wine Courtyard and Cellar were a source of pride. He was on their Board of Directors serving in many job areas including President or Vice President during the 1980s and 1990s. In recent years, he proudly wore his President Emeritus badge and loved being an OCWS Courtyard Ambassador. Charley was also known for his constant use of his video camera at every wine event he attended. You could always count on being offered a glass of wine, usually a big Zinfandel, from his cellar if you stopped in for a visit. Charley and Vivien were married 66 years. They had a full daily calendar. Charley's life was much quieter without Vivien but he still enjoyed his home, UCLA sports, and his wine. He was healthy and active until the day he passed. He said many times how lucky he was to have had such a great life. He is survived by his daughter Janet Peal (husband Paul d. 2018) and son Jack Owen and wife Sheila. He is also survived by 6 grandchildren: Erik Peal, Megan Spraker, Kelsey Owen, Caitlin Owen, Charles Owen, and Genna Owen. He will be missed by his 4 great-grandchildren: Eathan and Charlette (Charlie) Peal, Sierra and Micheala Spraker. There will be a celebration of Charley's life in the early part of 2022. In honor of Charley we are working to have an OC Wine Society memorial bench established through OCWS at the OC Fairground. If you would like to make a contribution in Charley's memory please donate to the OC Wine Society, the Sierra Club, or any other organization that is working to take care of our planet.

Published by Orange County Register on Nov. 18, 2021.
To plant trees in memory, please visit the Sympathy Store.
MEMORIAL EVENTS
To offer your sympathy during this difficult time, you can now have memorial trees planted in a National Forest in memory of your loved one.
MAKE A DONATION
MEMORIES & CONDOLENCES
Sponsored by The Orange County Register.
1 Entry
So sorry to hear of Charley's passing. He was truly one of a kind!
Bob and Ronnie Johnson
Other
November 19, 2021
Showing 1 - 1 of 1 results