Born April 16, 1943, to Sieglinda Lucht and David Fox in Staten Island, NY, David served in the U.S. Air Force from 1962-1968 stationed primarily in Germany and continued in Europe working for American Motors in Naples, Italy upon discharge.

David graduated from Goodman School of Drama, Chicago, with a Bachelor of Fine Arts Degree and spent his life as an actor, director and educator acting in London, the Globe Theater in Stratford, Canada and Hollywood. A member of the Sag-Aftra Union, Screen Actors Guild and Actor's Equity Association, he started the California Shakespearean Festival in Visala in 1979 after which he spent 6 years in Hollywood before moving to Minnesota. Most recently he was an educator at AOI College of Languages in Irvine.

The nephew of Rev Fox of the Four Immortal Chaplains, David founded the Immortal Chaplains Foundation in MN which later relocated to the Queen Mary in Long Beach. Through the sanctuary and historical artifacts, David worked tirelessly to bring the story of the Four Chaplains who gave their lives to save others of a different race, creed or ethnicity to the masses. The ICF awarded the Prize for Humanity through 2009 to those who gave their all in selfless service to others. He devoted his life to preserving the story so that others would practice understanding and compassion in their everyday lives.

David was a beloved husband, father and grandfather who loved to travel and enjoyed the arts, history, family and friends. Known by many as "David-pedia" he had an incredible gift of knowledge.

His cheerful caring will be greatly missed by his family and many friends. In lieu of flowers, please consider a charitable donation to the Immortal Chaplains Foundation, 23245 Cherry Hill, Mission Viejo, CA 92692. www.immortalchaplains.org "We are such stuff as dreams are made on;

And our little life is rounded with a sleep."

Let it be known, he made a difference…

Published by Orange County Register on Jun. 30, 2013.
To plant trees in memory, please visit our Sympathy Store.
MEMORIAL EVENTS
To offer your sympathy during this difficult time, you can now have memorial trees planted in a National Forest in memory of your loved one.
MAKE A DONATION
MEMORIES & CONDOLENCES
12 Entries
Polly, I just learned on Sunday from Sandy Jacobs that David had passed away! I am so sorry to hear that! I always looked forward to seeing both of you at the HOA meetings. He had such a wonderful voice and presence! I wondered why you stopped attending our meetings. Let me know if there is anything we can do for you.

Kathy Krieger,
HOA President
December 5, 2013
David and I grew-up together in the Adirondacks. We had lost touch, but then had some really fine correspondence in the last year before he died. In fact he sang my song, "Finally Home" with tears in his eyes at his own Mom's funeral not too long ago. Dr. Don Wyrtzen
October 18, 2013
Such a unique, warm and caring person...you will be greatly missed!
Jessica
July 15, 2013
You have been such a good friend to me. Thank you for your kindness to me and to others. And thank you for giving me the only real nickname I've ever had. Much love, Zappy
July 9, 2013
I just found out of David's passing. What a nice man. Although I knew him mostly in a professional manner our paths crossed frequently with our involvement in the community. He had a beautiful voice and whenever he called my office my female assistants would take a deep breath and a sigh before telling me, "David Fox-Brenton is on the phone". He made an impact on the world and will be missed.
Bart
July 3, 2013
I'm deeply shocked and sad!! I'll never forget your beautiful soul... you inspired me, my sisters and everyone in class! you were my best teacher and role model. I can't find the words to describe what I feel. I still can hear your laughs in my heart. I love you so much and will be missing you endlessly..

From your Saudi daughter like you always called me:
Maha Abdullah
July 3, 2013
I had the pleasure of knowing David for the last 5 years of his life and it has been the most fun I have ever had. What a guy he is the best!!!
Fred, the neighbor Peters
July 2, 2013 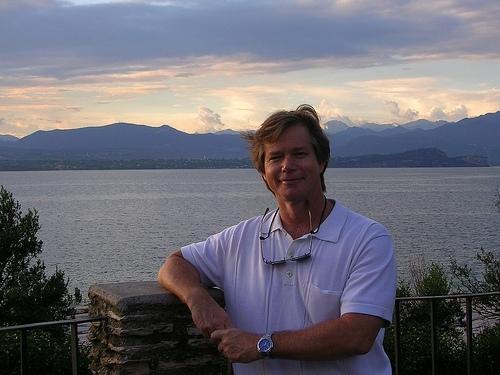 Onward to a radiant plain, beyond the woes and travails of suffering and pain. A Beloved Soul, David Fox, has passed, leaving a majestic behind, on this Earth. Farewell, noble Commander!
Steven SIKES
July 2, 2013
Dear brother,
My heart is heavy over your passing.We have shared some good times together and these memories shall be cherished all the more. As I use to sign off, "Outstanding!"
"...and they are mild."
Lovingly, Peter
Peter Jones III
July 1, 2013
Dear Uncle, you will be sorely missed. We will treasure all the memories of you in our hearts. We love you!
Pete & Dory Jones
July 1, 2013
Jesus will bring him back. John 5:28
July 1, 2013
May your spirit live on forever in all of our hearts. We will carry on the message of the Four Immortal Chaplains so that future generations will not lose the beautiful message of brotherhood and selfless sacrifice. May G-d grant you eternal rest. You and My late wife Rosalie, daughter of Rabbi Goode be reunited in Heaven to carry on the message for all of the ages.
Paul Fried and family
Paul Fried
June 30, 2013
Showing 1 - 12 of 12 results