Published by Orange County Register on Mar. 5, 2010.
To plant trees in memory, please visit our Sympathy Store.
MEMORIAL EVENTS
To offer your sympathy during this difficult time, you can now have memorial trees planted in a National Forest in memory of your loved one.
MAKE A DONATION
MEMORIES & CONDOLENCES
4 Entries
Uncle Bob was always a little larger than life in my mind. When around him, even when I was young, I had the impression he was aware of things that most weren't and, having heard Harry's eulogy, I now understand why. He projected a sense of security, knowing the unknown. He gave without wanting in return. He always had that twinkle in his eye. I knew him...but wish I had known him better. He left one heck of a legacy.
Craig Wheaton
March 11, 2010
I never met Grandpa but one thing I have always known about him: He was/is adored by his grandchildren...and that is a Loving Legacy all its own. Our hearts and prayers are with you at this time. We love you and feel we have indeed known Grandpa as we have been so tenderly loved by each one of you Swensons! OX, Dawn, Kevin, and Isabella Montgomery
Dawn Montgomery
March 10, 2010
What a wonderful man. He and Doris have raised eight great kids that are successful, loving people with good families. That is quite a legacy. I'm so happy that my sister married into his family.
Our prayers are with you all.
Don and Karen Moore
March 5, 2010 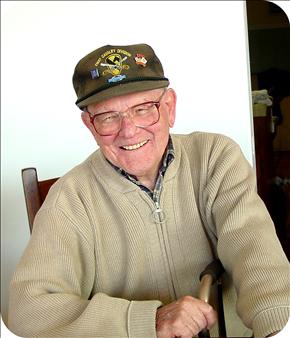