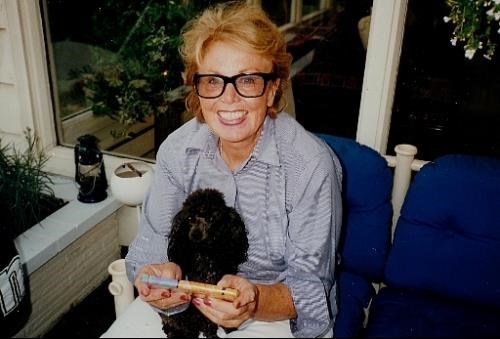 BORN
1932
DIED
2021
ABOUT
Taft High School
Jacqueline M. Hornstra
Aug. 28, 1932 - Nov. 5, 2021
Jacqueline Hornstra a longtime Portland homemaker died Friday, Nov. 5, 2021 after a brief illness, she was 89. Jackie is survived by her three children and their spouses, Gail Johnson (Richard), Vicki Pope (Kevin) and Roger Hornstra (Kathi); along with three grandchildren, Megan Mumford (Andy), Brion Johnson and Adam Hornstra. Jackie enjoyed hosting friends and family at her heart shaped swimming pool in Portland's West Hills. Many good times were shared there over the 25 years she and her husband Ray owned the home. She is survived by great-grandsons Marston and Jameson Mumford; along with her brother, Ed Pean; and many nieces and nephews. Her husband, Raymond preceded her in death in 2004.
Jacqueline was born in 1932 in Chicago, Ill., to Andre and Louise Pean, a pastry chef and his seamstress wife who both emigrated from France in the 1920's. French was spoken in the family home so Jackie became fluent at an early age. After graduating from Taft High School in 1950 and briefly attending Wright Junior College, Jackie became a stewardess for Pan American Airlines. She enjoyed flying internationally in the days gourmet meals were prepared in the galley but put her career aside in 1955 when she and Ray were married. In 1966, Ray and Jackie moved from Chicago with their three kids to Oregon where Ray started Cash Register Sales Co., in downtown Portland. They owned a small airplane and flew many trips around the country with their friends in the Pilots Club. Jackie was also very active in World Wings International, a large group of retired Pan Am flight attendants that held events to support local charities.
Please sign the online guest book at www.oregonlive.com/obits
Published by The Oregonian from Dec. 3 to Dec. 5, 2021.
MEMORIAL EVENTS
To offer your sympathy during this difficult time, you can now have memorial trees planted in a National Forest in memory of your loved one.
MAKE A DONATION
MEMORIES & CONDOLENCES
Sponsored by The Family.
1 Entry
On behalf of the PDX chapter of World Wings, we send her family our sympathies. Jackie was instrumental in founding our chapter, and her enthusiasm was contageous. We have 45 members today and the Pan Am family is still important to us all.
Nancy Murray
December 6, 2021
Showing 1 - 1 of 1 results