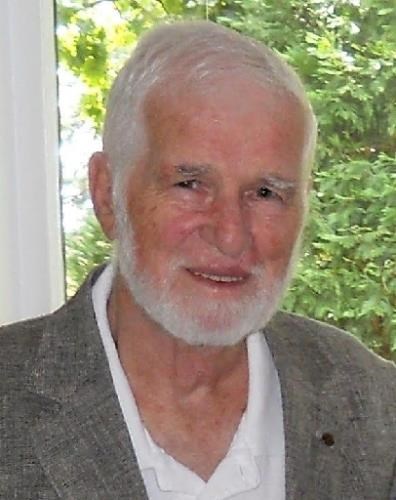 BORN
1931
DIED
2021
John Ramsay Maslen
April 17, 1931 - Nov. 5, 2021
We are saddened by the passing of John Ramsay Maslen at age 90, Nov. 5, 2021.
John was a person with a great capacity for fun and joy in life. His charm and humor engaged all who knew him, so that caregivers, employees, and servers, became part of his multitude of friends. He was always ready with a silly joke or quip. He was a good-hearted guy that people enjoyed spending time with. He was also a man who could share his heart. More than once, he said he had lived a good life, done all that he wanted, and was content.
Born April 17, 1931, John spent his youth in various towns in Massachusetts. He lost his mother to an accident in late 1932 but later become a brother to half siblings David and Nancy Maslen. To pursue a career in art, John matriculated at Rhode Island School of Design, where he graduated in clothing design. He did a stint in Japan during the Korean war, then returned to RISD for a Masters in Architecture and to continue his courtship of a charming southern belle. He married the love of his life, Bobby Lynn Hartness, Jan. 22, 1955.
In 1959, with one babe in arms and another on the way, John and Bobby drove their VW Bug across the country and moved to Tigard, Ore., where John found work as an architect. Bobby stayed home and raised a growing family of four: Lynn, David, Sylvia and Paul.
John was soon a partner at the Portland architectural firm of Barnes, Hilgers and Maslen (jokingly referred to as Barns, Houses and Mansions). John made friends and built community wherever he went. His RISD buddies in Portland were the nucleus of a lifelong circle of friends. He built a literal community, as he was a founding member and architect of Sunlight Holding Community, the first co-housing community in Oregon.
He is remembered for leading bagpipe parades for his children. He piped at friends' weddings, for the Catlin Gabel Rummage Sale and Grandparents' Day, in parades with the Clan McClay Pipe Band, and as solo piper in neighborhood events. He was an important member of the beginning reading community. His illustrations for Bob Books have helped millions of children learn to read. John was a talented watercolor painter. A few of his memberships and awards included: Transparent Watercolor Society of America-American Master Award, Signature Member, Master Status, Watercolor Society of Oregon-Diamond Award, American Society of Marine Artists-signature member. His Watercolor Critique Group met monthly for over 40 years, only stopping in-person meetings due to Covid.
He also took his turn as host of the Old Guys Group who for over 40 years met monthly and helped solve the world's problems. Age is sadly thinning their ranks.
John was known for his goofy wit and sense of humor. One long-standing joke started on a trip with daughter Sylvia. Upon arrival in Northern Scotland, the two were confounded to discover they could not understand a word of the local language. This was problematic as they hunted for a tavern to quench their thirst. When they finally found a hostelry, they saw a sister and brother playing at a video arcade. Climbing a step to see the game, the brother's jostling prompted his sister's exclamation, "Do nae boudge me, git doon. (Do not budge me, get down.)" These were words the Americans could understand, and permanently entered Dad's lexicon. His caregivers heard it often, as there is a lot of "boudging" to put up with as you get older.
A few more examples of his humor: With son David, he stopped at a bank he had designed in the 1960s. He looked at it and said, "It hasn't fallen down yet!"
When he missed something in conversation he would often say, "What's that? I can't hear you, I've got a banana in my ear!" (a punch line to one of his favorite jokes). Advice: "Golf is like marriage. When it's going well don't ask why. Just enjoy it."
John lived for several years at the senior community, Willamette View, in Milwaukie, Ore. To visit was an exercise in being greeted in the hall, "hi, John," "hey, John" "John, how you doin'?" He had a way of making everyone feel that they were the most important person in his life.
John was preceded in death by his wife, Bobby, who we hope is sharing a joyful dance with him today. He is survived by children, Lynn Maslen Kertell, David Maslen, Sylvia Maslen Davids, and Paul Maslen; his sister, Nancy Burkeholder; as well as eight grandchildren; and many other friends and relatives.
A memorial is being planned for this spring.
Please sign the online guest book at www.oregonlive.com/obits 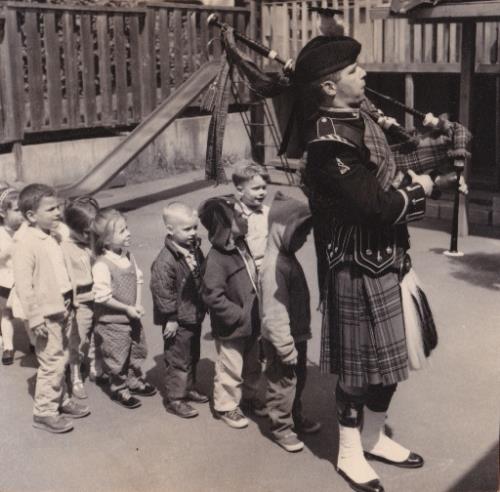 Published by The Oregonian from Nov. 19 to Nov. 21, 2021.
MEMORIAL EVENTS
To offer your sympathy during this difficult time, you can now have memorial trees planted in a National Forest in memory of your loved one.
MAKE A DONATION
MEMORIES & CONDOLENCES
Sponsored by The Family.
3 Entries
I filled out a foursome of golf with John and his some Dave a number of times. I remember fondly the 18 holes and usually a beverage and discussion on the 19th hole. John was a pleasure to be around and made golf a fun experience. My condolences to the family.
Tom Brown
Friend
November 24, 2021
I forgot to ask what nonprofit would be John's choice? [email protected]
Bill Lawrence
November 23, 2021
I forgot whether I met John through the pipe band, or elsewhere. We lived in the same general neighborhood and socialized periodically. In any case I knew him well enough to appreciate all the traits mentioned in the obituary and liked both John and Bobbie. I would like to express my sympathy to the family for his loss. "Scotland The Brave" will never be the same without him. Sincerely, Bill Lawrence
Bill Lawrence
November 23, 2021
Showing 1 - 3 of 3 results