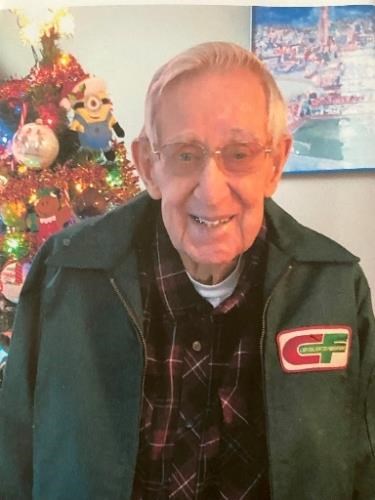 BORN
1923
DIED
2021
Millard Fillmore 'Robbie' Roberts
Oct. 27, 1923 - Sept. 2, 2021
Robbie Roberts passed away after a fall Sept. 2, 2021, with his beloved son and daughter-in-law by his side.
Robbie was born in 1923 in Maupin, Ore. He was the son of Willis and Cora Roberts, and one of six children. He grew up on a ranch in Maupin. In 1942, he joined the Army Air Corps, the 456th Bomb Group, 15th Air Force, and was stationed in Italy for two years. During that time he worked on B-24s bombers. He and his fellow soldiers lived in tents through all forms of weather, occasionally going into town for spaghetti dinners and red wine. He enjoyed a glass of burgundy throughout his life!
Upon coming home, he married Kitty Oakes, and they had their only son Millard, also known as Robbie. In 1950 he was hired by Consolidated Freightways as a truck driver and began a 37 year career with this company he loved. He was a life long Teamster, and served on the Executive Board for Local 81. He was also a shop steward for 20 years. In 1970, Robbie was awarded the Oregon Truck Driver of the Year award. He also was given an award upon retirement for driving 2.4 million miles with no accidents!
When Robbie and Kitty divorced, Robbie and his son ended up together. They called each other Pardner, as he told his son they were Pardners for life.
Robbie's son became a Portland Police officer and was also a Captain in the Coast Guard. Robbie was always so proud of his son. Robbie volunteered with his son for 40 years with the Sunshine Division, and dad often visited son in the different places the Coast Guard sent him over his 32 years of service. They were together almost every day, that time allowed.
The other great source of love and pride to Robbie was his granddaughter Emily Roberts (Araujo). From the time she was a little girl, through all her years of growing up, and even in her busy adult years as a cardiac care nurse, he spent as much time with her as possible. He even drove one of his CF trucks to her third grade school to share it with all her classmates.
One of his great accomplishments was the On to Oregon Cavalcade celebrating the 100th birthday of Oregon in 1959; In April of 1959, a wagon train of seven wagons followed the Oregon Trail from Independence, Mo., to Independence, Ore. It took five months. Everyone lived on the trail and in the wagons, and Robbie made many lifelong friends. He was one of only a few surviving members left at his passing.
His last years were spent living close to his son and beloved daughter-in-law, Chrissie Bullock-Roberts at Springwood Landing in Vancouver, Wash. A big shout out to the wonderful loving staff here and also the care team from Addus who watched over him daily; Beth, Sara,Gracie,and Marie. He loved all "his girls."
A celebration of life will be held later. Every person that met Robbie felt his love and kindness, his warm hugs, his big smile, and his favorite greeting, "How are you doing today, beautiful lady?" Robbie, we know you are in heaven with your beloved family and your favorite dog Fritz!
Please sign the online guest book at www.oregonlive.com/obits
Published by The Oregonian from Sep. 17 to Sep. 19, 2021.
MEMORIAL EVENTS
To offer your sympathy during this difficult time, you can now have memorial trees planted in a National Forest in memory of your loved one.
MAKE A DONATION
MEMORIES & CONDOLENCES
Sponsored by The Family.
6 Entries
I remember Rob and Robbie taking me to deliver food at Christmas for the Sunshine Division. I was only in my teens but it made me aware of the importance of volunteering to make this world a better place. I also remember him being especially wonderful when my daughter visited her great-grandma (Edith) You will be missed. Loved your clocks.
Tani (Conner) Mask
Other
September 24, 2021
He was a wonderful man.
Barbara Hege
September 20, 2021
I worked with "Robbie" at CF and he was the kindest soul I ever met. Rest in peace old friend....
Cathy Hyde
Work
September 19, 2021
Rest In Peace Pardner!!
Stephanie Solomon
Friend
September 19, 2021
" Pardner" will always be with me in my heart. He was one of the kindest gentleman I have ever known. He left lots of love behind for all who knew him.
Everice Moro
Friend
September 18, 2021
RIP Pardner. You will be missed!
Jean Woodworth
September 17, 2021
Showing 1 - 6 of 6 results