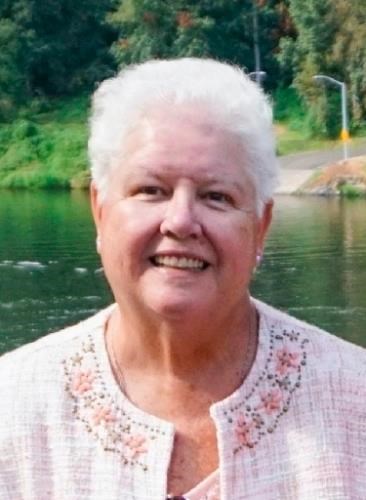 BORN
1950
DIED
2021
Sister Rita Carey, SNJM
March 26, 1950 - Oct. 1, 2021
Sister Rita Carey, SNJM, 71, died Oct. 1, 2021, in Salem. Her Mass of Resurrection was celebrated Oct. 7, 2021, at Queen of Peace Catholic Church, Salem.
Daughter of Thomas and Madeline Lavin Carey, Rita was born in Ohio. The family later moved to Oregon, first to Medford and later Salem where in 1968 Rita graduated from Sacred Heart Academy. In 1971 Rita entered the Sisters of the Holy Names of Jesus and Mary. Upon completing her B.A., she embarked on her career in education at St. Mary's Academy, Portland where she served as an English teacher, vice principal and principal. She also taught and was vice principal of Holy Names Academy, Seattle. During this time, she completed an M.A. in English at the University of Oregon. A gifted writer, in 1988 Rita began doctoral studies eventually graduating from Florida State University with a Ph.D. in English. In 1992 Rita joined the faculty of Clark College, Vancouver, where she became a highly respected professor. She served as literary advisor to Phoenix, the student art and literary magazine which in 2008 was named the best college literary art magazine in the country by the American Scholastic Press Association. During these years and into her retirement, Rita utilized her wealth of creativity in numerous writing projects, poetry, book reviews, and short stories. She was also sought after as a highly knowledgeable educational consultant.
A Holy Names Sister for 47 years, Rita is survived by her siblings, Thomas J. Carey, M.D. (Jacqueline), William Carey (Darlene), Emma Carey Alstott, and Rev. Ray Carey; her nieces and nephews; and the members of her religious community. Remembrances may be made to the Sisters of the Holy Names, P.O. Box 398, Marylhurst, OR 97036 or online at:
www.snjmusontario.org/donate
Please sign the online guest book at www.oregonlive.com/obits
Published by The Oregonian from Oct. 8 to Oct. 10, 2021.
MEMORIAL EVENTS
To offer your sympathy during this difficult time, you can now have memorial trees planted in a National Forest in memory of your loved one.
MAKE A DONATION
MEMORIES & CONDOLENCES
Sponsored by The Family.
5 Entries
I was her dentist for the past 20 yrs. I have such fond memories of this great lady. I loved it when she would be on our Schedule. Her outlook on life and her loving way would just make your day. She was the kind that made you think you were her best friend. She will be missed but heaven will be blessed by having her back home.
Charles Branen DMD
Friend
October 13, 2021
Rita was my angel. I did not have enough time with her and I will always remember her kindness, bountiful love and wonderful sense of humor.
Janice Ritter
October 13, 2021
My heartfelt sympathy to all of my Carey cousins. I remember Rita very fondly.
Tom Lavin
October 11, 2021
Sr. Rita was a complete joy to be with. She was as bright as could be. I will always remember her infectious spirit curiosity, and witty and wonderful conversational stamina. She was a true blue-thoughtful, loyal, empathetic and fun! Gone too soon but off to Glory land! Sending love to Rita´s family and to her close pal Kris. Xo
Brooke Larkins
Friend
October 10, 2021
Sr Rita was as much a part of Our Family as hers and that beautiful smile n delightful conversation will be forever in Our hearts n memories RIP
Carol Montecucco
October 10, 2021
Showing 1 - 5 of 5 results