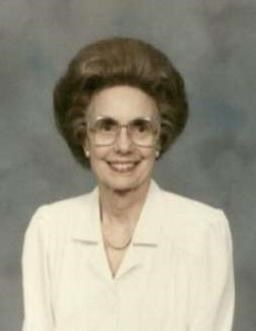 BORN
1928
DIED
2021
ABOUT
H.B. Plant High School
Bettie Rogers Allen, age 93, passed away September 10, 2021 in Orlando. Bettie was born in Tampa, Florida May 19, 1928. She is the daughter of Lallie Tipton and John Franklin Rogers. Bettie grew up in Tampa's Hyde Park neighborhood and graduated from Plant High School. In 1946 she enrolled at the University of Georgia and studied elementary education. Bettie joined Chi Omega sorority and was tapped for membership in Mortar Board. In 1950 Bettie married Walter G. (Buckie) Allen, Jr, of Tampa where Buckie joined the family business, Allen Drug Company, founded by his grandfather. He and Bettie ultimately settled in Orlando, a city they dearly loved.

Bettie was a devoted wife, mother, grandmother, and great-grandmother. She was a Deacon, a member of the Intercessory Prayer Team, and a Sunday School teacher at First Presbyterian Church Orlando, where she and Buckie were active members for more than 50 years. She was also a member of the Greater Orlando Junior League, the Rosalind Club, and she delivered Meals on Wheels for several years. In her neighborhood, church, and among her friends, Bettie was known and loved for her humble acts of kindness, joy in serving others, and strong faith in God. She was an avid gardener and helped start the "Prayer Garden" at Westminster Towers where she spent the last eight years of her life.

A private memorial service for family will be held at a date in the future. In lieu of flowers, contributions can be made to Second Harvest Food Bank of Central Florida and IDignity of Orlando.
Published by Orlando Sentinel from Sep. 14 to Sep. 15, 2021.
To plant trees in memory, please visit the Sympathy Store.
MEMORIAL EVENTS
To offer your sympathy during this difficult time, you can now have memorial trees planted in a National Forest in memory of your loved one.
MAKE A DONATION
MEMORIES & CONDOLENCES
Sponsored by The Orlando Sentinel.
4 Entries
Mrs. Allen was a lovely person and a great friend to my mother. I appreciated her (and Bonnie's) support when I lost my mother 30 years ago. I regret that I cannot travel to Florida for the funeral, but the whole Allen family has my condolences.
Martha Slettedahl Hayden
Friend
September 16, 2021
Bettie was my fantastic friend at W. T. O. She was a dynamic Christian Sister in Christ!! Ed was a frat bro of Buckie at U.F. I knew Buckie´s father. He gave me a sterling Silver baby cup when I was born 1930 Our 3 drug stores gave Buckie lots of business. A.D.Co. I pray at Bettie´s Prayer Garden and love her birds. Bro Ed Moses. Pharmacist
ED MOSES
September 16, 2021
Mrs. Allen was part of the network that kept watch over the gaggle of kids that roamed Rowena Park in the 50s and 60s. Bill Allen was one of my earliest friends, and the Allens knew my parents. It was a great neighborhood in which to grow up, thanks to folks like Bonnie Allen, and I will always be grateful for the safe place they provided. My condolences to Bill and the Allen family.
Robert Carr
September 16, 2021
Frank and Bonnie - Your mother was one of the sweetest women I have ever known. She was unfailingly kind, always gracious and a loving, humble servant. I always loved seeing her at church and she would always call when we were facing tough news. She left a legacy of caring wherever she went. The world needs more Bettie Allens. I am so sorry for your loss - much love to you both.
Denise Hammond
September 15, 2021
Showing 1 - 4 of 4 results