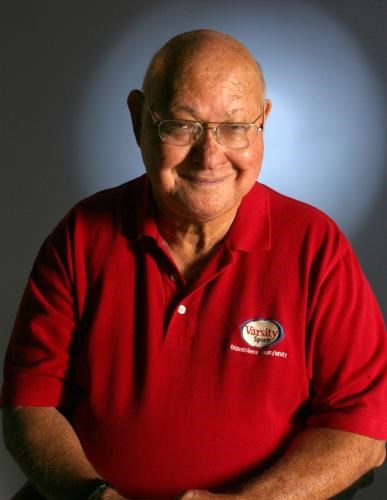 He is remembered for chronicling the successes and travails of Orlando-area athletes, coaches and high school sports programs as well as mentoring a legion of fledgling sports reporters over four decades.

Bill-everyone called him "Buch" or "Bucky"-died July 23 of complications from congestive heart failure. He was 81.

He was preceded in death by his parents, Irving and Sylvia Buchalter; by a twin brother who died in childbirth; by sister Barbara Bergoffen; by first wife Marilyn Klopman Buchalter; and by former spouse Lenoreann Sowle Shirah.

Born prematurely (at only 2 pounds) on April 2, 1940, in the Brooklyn, N.Y., neighborhood of Flatbush, Bill was the son of a pharmacist and homemaker with a large extended family. One of his uncles was his dad's brother, Louis (Lepke) Buchalter, head of the New York mafia's infamous Murder, Inc. When he was 1, his parents moved the family to St. Petersburg, where Bill grew up.

He was in the first graduating class of Boca Ciega High School in 1956. Four years later, after internships with The St. Petersburg Times and Miami Herald, he graduated from the University of Florida with a degree in journalism, and he started his first full-time job with The Times in 1962.

In 1967 he joined the Orlando Sentinel Star, starting a 40-year career at the paper, where he rose to be regional sports editor. From the 1980s through the early 2000s, the paper had sports writers in satellite offices spread across Orange, Seminole, Lake, Osceola, Volusia and Brevard counties. Buch made it one of his missions to help them, even though he realized that most of the young journalists viewed high school sports coverage as a steppingstone to more attractive assignments covering college and pro teams and events.

Buch built his reputation by constantly talking to coaches and by spurning local press boxes, preferring to cover games from the sideline, gleaning insight and tidbits from players and coaches that later informed his readers. He kept his own statistics and encouraged younger colleagues, some of whom worked for competing publications, to do the same. He was a whiz on deadline, and after he finished writing he helped edit other stories for the next day's paper.

His other hallmark was to accentuate the good in the people and events he covered, a trait he learned from popular longtime Sentinel columnist Charlie Wadsworth. Not surprisingly, two of Buch's longtime coaching friends shared that nice-guy sentiment and were themselves years perennial underdogs for many years: Stetson men's basketball coach Glenn Wilkes Sr., and Florida State football coach Bobby Bowden.

That philosophy helped him get to know every high school coach and principal in Central Florida. In fact, it seemed everybody in town knew Buch-even the referees and umpires he often disagreed with. They all returned his calls and greeted him by name when they would see each other at events.

Buch eventually wrote a weekly names and notes column called People and Places. It was a perfect medium for someone with a large Rolodex of contacts and a penchant for taking notes of every phone conversation. And when he was in the office, Buch was always on the phone.

He took seriously his role of caretaker of a long-established Sentinel tradition, the annual naming of the All-Southern team. Working with fellow prep writers in 11 other states, he helped pick the Dixie Dozen-the best high school football player in each Southern state. They headed up the larger list of All-Southern honorees, all-stars who were unveiled in print on Christmas Day.

Buch's desire to help athletes succeed fueled a new cottage industry: tracking college football recruiting. As Florida's became a recruiting hotbed, Buch realized he already was collecting all the information he needed to join a small group of people across the country who gathered data (primarily height, weight, speed and high school), packaged it together and delivered it to coaches (who wanted recruiting shortcuts) and fans (who wanted to know who their favorite schools were trying to lure to campus).

Buch then developed his Namebook, a formalized list of top football prospects in the state. Coaches bought copies to bolster their recruiting. And Buch leveraged the information to become a pre-eminent recruiting guru.

In the run-up to National Signing Day during the pre-internet era, Buch was a guest on sports-talk radio shows across the country. He logged late hours at the office as the producer of the Sentinel's ever-updated, 1-900 recruiting hotline: "This is Bill Buchalter, and here is the latest commitment news for the Florida Gators, the Florida State Seminoles and more . . ."

Once National Signing Day concluded, Buch polished off his recruiting rankings nationally, conference by conference and of Florida's schools.

He also played a role in the creation of the Florida-Georgia All-Star game, a postseason event staged in Orlando to showcase top talent from the two states. For years, he helped pick Florida's team, called the Super 24.

Although football often put Buch in the spotlight, it was track and field that captured him. He covered his first Olympics in 1972, the Summer Games in Munich, Germany, and was profoundly affected: 11 Israeli athletes and coaches were held hostage and killed by a Palestinian terrorist group. By the time he retired, he'd traveled to a dozen countries to watch U.S. athletes, but sports were never as serious for him again.

Covering the Olympics gave Buch the travel bug, one he never lost. He and Stephanie spent time in France, Italy, Ireland, England, New Zealand and Hawaii, among other destinations. In his down time, Buch enjoyed reading spy novels and about Civil War history and American history. Although he grew up near the Gulf of Mexico, he was never fond of sitting in the sand or in the sun. "He'd sit in the condo and read," watch MSNBC or sports and yell about the officiating or play-calling, Stephanie said.

Truth be told, Buch worked a lot. In the mid-1970s, he was part of a local group that created the Golden South, a national invitational track meet. Held at Winter Park's Showalter Field, the event showcased the country's top sprinters and distance runners, high jumpers, long jumpers and other field competitors, male and female. Through his nationwide track connections built through his Olympics coverage, Buch kept meet organizers up to date with the country's top competitors as they built their invitation list.

For all his accolades and accomplishments, it was Buch's humanity and generosity that made him stand out. Shaped by the anti-Semitic acts he endured as a boy and witnessed at the Olympic massacre in Munich, Buch saw people and abilities and not color, gender, age or race. The first Florida state championship team he covered was the boys basketball team at St. Pete Gibbs, which broke the color barrier when it joined the Florida High School Activities Association in 1967.

Buch retired-he preferred the term "downscaled"-from the Sentinel in 2007, begrudgingly taking a buyout even though he still felt connected to local high schools and coaches. He had surrendered management of the paper's high school sports coverage a few years earlier.

He started a second career as a broadcaster with Brighthouse, which telecast top high school football games on Friday nights as part of its local news coverage and helping with state championship games when they were moved to sites in Orlando.

Buch was always game to get out for lunch with friends and former Sentinel colleagues. He never stopped asking questions about who was doing what these days, and he was at once fascinated and disbelieving of today's technology while also being dismayed at the state of the newspaper business.

Bill's family is planning a celebration of life soon-and the public will be invited. In lieu of flowers, his family requests donations be made in his name to the athletic department at your local high school until a scholarship in Bill's name is finalized.

-30-
Published by Orlando Sentinel from Aug. 9 to Aug. 15, 2021.
To plant trees in memory, please visit the Sympathy Store.
MEMORIAL EVENTS
To offer your sympathy during this difficult time, you can now have memorial trees planted in a National Forest in memory of your loved one.
MAKE A DONATION
MEMORIES & CONDOLENCES
Sponsored by The Orlando Sentinel.
7 Entries
A legend lots of fun with Bill. A talented fair and good guy.
Larry Hornsby
August 20, 2021
Bill was a great guy. He will be greatly missed.
Mike Kirby
August 16, 2021
My condolences. Bill was the best-a friend to all High School coaches, sports people, and student-athletes. There will never be another like him. We will all miss him greatly. I will miss him.
Rick Rothman
August 12, 2021
Mr. Bill buchalter you was a very great man always had when it came to track. But nobody could write and tell a story like you c/o 96 will definitely miss you my prayers going out to your family
Deniro Levarity
Other
August 12, 2021
A legend has passed but his earthly time will be remembered and cherished by many.
Randy Bugos
Friend
August 10, 2021
Mr Bill buchalter a man with highly respectable terms, you will be really missed in the sports world in Orlando Florida our sympathy goes out to the buchalter family may God bless you keep you in his arms. a legend in his own time!!!
cyril wyatt
Friend
August 10, 2021
In loving memory of a wonderful person. We will love you and miss you always.
R.C.Lee
Work
August 10, 2021
Showing 1 - 7 of 7 results