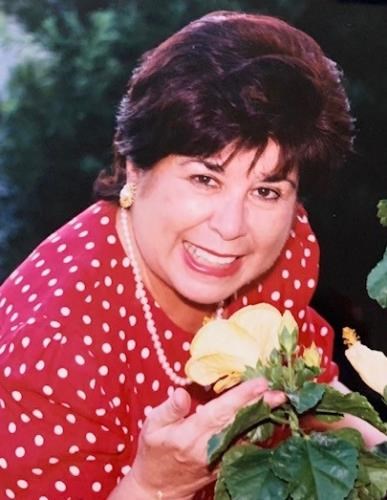 Johnson, Maria Ignacia (Mary), was lifted up to the Lord on June 3, 2020 as she passed away peacefully at home with her family. She was born in New York City, NY on July 3rd, 1933 to Angela Perez and Felix Dionosio Perez. Mary's family returned to Cuba where they later fled the Castro regime to settle in Miami, FL. She attended school and graduated from Jackson High School.

Mary met her soul mate, Bob, at the USO dance in Miami, FL, St Gesu Church, where they were later married on July 3, 1954. While Bob was in the Navy serving his country as a Sonar Technician and Navy Chief Petty Officer, Mary was raising their family as well as volunteering for the Navy Wives Club, the Red Cross as a Dental Hygienist, the United Service Organization (USO) and Veteran Affairs. After Mary's husband Bob retired from the Navy in 1967 in Pearl Harbor, HI, they moved their family to Orlando so that Bob could work on the Apollo Space Mission, military contracts and later serve as a Fire Inspector for Casselberry and the City of Orlando.

While living in Florida, Mary continued to dedicate her life to her loving family and serve her community in several ways. Mary was the first Hispanic to be elected to the Orlando City Council where she served 3 terms as the City of Orlando Commissioner for District #2 from 1980-1992. She was also the first Hispanic to be elected to the Orange County Board of County Commissioners where she served District #3 for an additional 12 years (3 terms) until retiring from public service in 2004. Some of her community accomplishments included collaboration with the following developments: Greater Oaks Village, the Beta Center, Low income housing projects for seniors, Azalea Park Field of Dreams, Dover Shores and Englewood Community Center, the Russell Home, FL Naval Base, redevelopment of Baldwin Park, restoration of Lake Eola Park and serving as Den Mother for the Cub Scouts.

The passion Mary had for her community and advocating for victims of crime, led to a role she was extremely proud of. She was the Founder of the Victim Service Center (VSC) in 1999 where she also served as the first and longest standing President of the Board of Directors for the first 9 years of VSC's 21 year history.

Mary was a leader who helped shape and guide the growth of Central Florida into a world class business and travel destination. She led efforts to build a park near Orlando Executive Airport, a YMCA in Blanchard Park, and was a swing vote to approve the building of the original Amway Arena in Orlando. Given her contributions, she was recognized with multiple awards including: the National Association of Hispanic Elected Officials Lifetime Achievement Award, Summit Award, and Outstanding Women in Government Award, among many others.

Throughout each of these achievements, Mary always put her faith in God and family first; she carried this attribute into her work for the community. She served as Minister of the Eucharist at Good Shepard Catholic Church. Mary was known to always wear a butterfly pin on the back of her left shoulder; this was her trademark. The butterfly was a symbol to represent change and the beauty that emerges after the darkness of the cocoon. Her love for her family was absolutely boundless and will be greatly missed, however her legacy remains. As we all know she loves to dance; she rests in God's presence as she dances with her husband, Bob.

Mary is survived by her loving sons, Robert, Albert and Charles;

A private family Catholic mass will be held and a public celebration honoring her life and funeral services will follow at a later date. In lieu of flowers, the family asks that donations be made in memory of Commissioner Mary I. Johnson's name to the Victim's Service Center or the American Diabetes Association.

To plant trees in memory, please visit our Sympathy Store.
Published by Orlando Sentinel from Jun. 11 to Jun. 18, 2020.
MEMORIAL EVENTS
No memorial events are currently scheduled.
To offer your sympathy during this difficult time, you can now have memorial trees planted in a National Forest in memory of your loved one.
GUEST BOOK
1 Entry
Charles, Albert and Robert, I am very sorry for your loss. Your mother was such an asset to the community. My deepest sympathies.
Stephanie Kinser
June 16, 2020