ABERNATHY, MICHAEL MCGUIRE, 66, of Orlando, FL, died Sunday, July 15, 2012, at Orlando. Mike was born August 29, 1945, at Fort Myers, Florida, and was the eldest of the three children of Arthur Briggs Abernathy, Jr. and Louise C. McGuire Abernathy. Mike's dad was serving in the military and a few months after Mike's birth, the family relocated to another duty assignment which was the beginning of Mike having the opportunity to live in many locations in the United States and overseas. Mike particularly enjoyed living in Arizona where his next door neighbor spent endless hours introducing him to fast cars, woodworking and the ability to fix anything mechanical. Between the neighbor and his uncle Marvin McGuire who gave him his first ride on a motorcycle, they ignited interests that Mike enjoyed throughout his life. Mike graduated from high school in Germany. Some time ago Mike learned of the Bitburg Alumni Association and thereafter kept in touch with his high school friends as well as attended some of their periodic alumni reunions throughout the country. After high school, Mike moved to Wichita for his dad's last duty assignment at McConnell. He attended college at Wichita State and also completed drafting school. Mike enlisted in the United States Navy serving in Viet Nam and after receiving an honorable discharge, he moved back to Wichita where he then worked as a draftsman and also had his own cabinet and woodworking shop. Mike was very involved in the Sports Car Club of America while living in Wichita as well as riding motorcycles in various groups and with numerous fellow cyclists. In 1989, Mike moved to Florida to marry Nancy J. Fursman Abernathy and they lived in Orlando after their marriage. He continued with jobs in the woodworking and cabinet making field until opening his own shop. The exquisite workmanship of his furniture and cabinet making allowed him to develop a reputation whereby work for one client would be seen by someone who would then sign on for his services without any need for advertising or solicitation of business and often there was a significant waiting list of clients. Much of his work was completed for homes of celebrities and entertainers, professionals in the medical and legal fields and professional athletes. Often a client would have a vision of what was wanted but had no way to show a picture of how the client thought the final project should look. Because of his skill as a draftsman, Mike could sit down with the client who would give the full description while Mike was sketching and drafting what the person had previously been unable to put on paper with the understanding that if the client could describe it, Mike could draw it and then create it as a work of art in wood. Mike was also skilled with Auto-Cad and other computer programs which assisted with his projects. Many times Mike would develop a particular type of wood turning or other specialty item to make a project unique with the commitment to the client that it would never be repeated in any other client's project. In 2006, Mike had to shut down his shop due to health issues but he continued to advise, consult and work part time as long as he was able. His enthusiasm for motorcycles continued and he enjoyed attending rallies and events with his friends. Mike had founded several motorcycle clubs since coming to Orlando. He also participated with a group which met every Thursday night for conversation and dinner referring to the guys who attended as some of the best people he had ever met. Mike's additional interests included metal turning, music and gardening and he was a voracious reader. He was a man of intelligence, wit and compassion. He always enjoyed being pet owner from the time he had his beloved dog Josie through the series of rescued cats who came to live with him and Nancy with the current feline king of the house known as Reynaldo. In addition to his wife Nancy, Mike is survived by his mother Louise C. McGuire Abernathy and brother Pete Abernathy, both of Cincinnati, OH; Pete's wife Holly; additional sisters-in-law and brothers-in-law Susan and Don Diebolt, John A. Fursman, III and Roxanne and Charles Dawson, all of Kansas; his father-in-law John A. Fursman, Jr. of Kansas; and many nieces, nephews, great-nieces and great-nephews; and two great-great nieces. His father and his sister Deany Rief are deceased. A graveside service will be held at the Colony Cemetery in Colony, Kansas, on Saturday, July 21, 2012, with burial in the Fursman Family Section of the Cemetery. Services are under the direction of Waugh-Yokum and Friskel Memorial Chapels of Iola, Kansas, telephone 620-365-2948. In accordance with Mike's wishes, a celebration of his well-lived life will be held in Orlando at a later date. If you wish to remember Mike with a memorial tribute, please donate to the charity of your choice or to a cause in which you believe. Mike believed in organ donation and as his final act of kindness provided the gift of sight to two individuals by donation of his corneas to the Lions Eye Institute for Transplant and Research, 1410 North 21st Street, Tampa, Florida 33605, telephone 813-289-1200.
Published by Orlando Sentinel on Jul. 17, 2012.
To plant trees in memory, please visit the Sympathy Store.
MEMORIAL EVENTS
To offer your sympathy during this difficult time, you can now have memorial trees planted in a National Forest in memory of your loved one.
MAKE A DONATION
Please consider a donation as requested by the family.
MEMORIES & CONDOLENCES
12 Entries
I love you Mikey.
July 21, 2012
I love you Mikey.
Jenni Wallace
July 21, 2012
Our sympathy to your family dear friend. You will be very much missed by many of us here. Find an old Guzzle up there and enjoy them back roads again.
Cathy & Jody Barker
July 18, 2012
Fair winds and following seas sailor.

Thank you for your service to this nation.
Harry Simpson
July 18, 2012
Fair winds and following seas sailor.

Thank you for your service to this nation.
Harry Simpson
July 18, 2012
39 years ago I work at J & G Products downtown here in Wichita. My boss was Michael Abernathy. We made Pizza Hut products & he ran the 2nd shift crew. He was great to work for. Sorry for your loss. You are in my thoughts and prayers.
Rhonda Miller
July 18, 2012 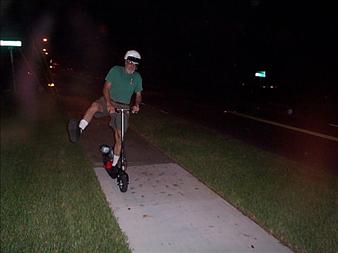 Thanks to the interstate hi-way system it is now possible to travel from state to state without seeing anything. No barriers now my friend, Enjoy the ride.
July 18, 2012
Auf Weidersehn Mike. You will be sorely missed, but well remembered. We'll have ein mehr "Bitte Ein Bit" for you during our reunion in October.
Jane Nicola Mathis
July 18, 2012
You left us way to early. You were a great Guy,Friend and very talented person. Ride on Mike
Anne deLaroche
July 18, 2012
Our deepest sympathy to Mike's family. May you be comforted with memories and legacy that Mike left on your hearts.
Kroger Facility
July 17, 2012
Mike, you will be missed! May you be riding the highways in heaven forever on your favorite bike, flying by the seat of your pants!!
Lynn Sunday
July 17, 2012
A gentleman... and a scholar. Eli and I regret not getting to visit with you when you would return to Wichita. Richard and Eli Hess, Wichita
July 17, 2012
Showing 1 - 12 of 12 results