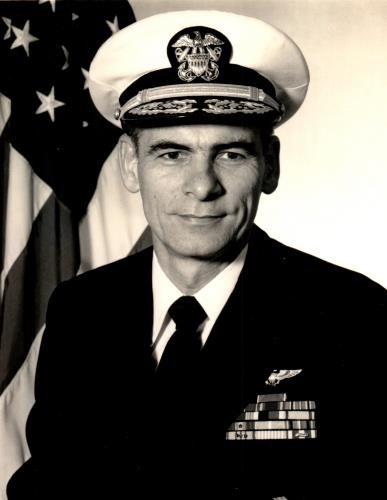 FUNERAL HOME
Baldwin-Fairchild Oaklawn/LM
5000 COUNTY ROAD 46A
Sanford, FL
Tyler Freeland Dedman, 94, passed away July 26, 2021, in Lake Mary, Florida, following a brief illness. "Ty" Dedman was born in Los Angeles, California, where he attended high school and UCLA before enlisting in the Navy in November, 1943. After serving in NROTC units at the universities of Kansas and Colorado, he received an appointment to the U.S. Naval Academy, graduating in June, 1947. He remained on active duty for 38 years before retiring as a Rear Admiral in 1982.

Prior to entering flight training in Pensacola, Florida, Admiral Dedman served a tour in Tsingtao, China, on the staff of the Commander, Naval Forces Western Pacific. After completing an around the world cruise in USS TARAWA (CV-40) in 1954, he entered the U.S. Naval Postgraduate School, Monterey, California, in the aeronautical engineering curriculum. He completed a third year of postgraduate studies at Princeton University, where he earned his MS degree in engineering. Admiral Dedman's shipboard assignments included service in two cruisers, six aircraft carriers, and three aviation carrier attack squadrons: VA-35, VAH-5 and VAH-10.

Upon graduation from the Naval War College in 1961, he served ashore in the Bureau of Naval Weapons, where he was a design development officer for the North American VIGILANTE aircraft. His other key assignments ashore included serving as executive assistant to the Vice Chief of Naval Operations, and attendance at the Advanced Management Program of the Harvard Business School.

During the Vietnam War, Admiral Dedman commanded Heavy Attack Squadron TEN, embarked in USS CONSTELLATION (CVA-64). He participated in reconnaissance operations over Laos and Vietnam, and in support operations' air strikes following the Gulf of Tonkin Incident in 1964. His Vietnam service also included a tour as executive officer of the USS PICKAWAY (APA-222), and command of the USS PONCHATOULA (AO-148).

Admiral Dedman's flag assignments included serving as Assistant Vice Chief of Naval Operations in the Pentagon, Deputy Chief of Naval Education and Training in Pensacola, and Superintendent, U.S. Naval Postgraduate School, Monterey. In his final assignment in Portugal, he commanded all NATO forces in the Iberian Atlantic.

Following retirement from active military service, he investigated aircraft accidents for major aviation insurance firms in coordination with the FAA and the NTSB. He later served a term as an elected member of the Board of Governors of the National Association of Security Dealers (NASD, now FINRA).

Ty Dedman was a founding member, vestryman and Senior Warden of St. Peter's Episcopal Church, Lake Mary, Florida. He was also a founding director and treasurer of The Mountain of Hope, a charitable non-profit providing a medical-dental clinic in rural Honduras. For his two decades of volunteer service in Honduras, he was recognized as an honorary lay canon of the Episcopal Diocese of Honduras. He also served the community of Lake Mary in leadership roles on various boards and committees. He was a past president of the Rotary Club of Lake Mary, the Association of Naval Aviation (Central Florida chapter), and the Sanford Area Retired Naval Officers' Association. He was a Paul Harris Fellow of Rotary, International, and a life member of the Naval Aviation Museum Foundation. He was also a life member and past director of the U.S. Naval Institute, and past chairman of their editorial board.

He is survived by his beloved wife of 68 years, LuRene (Bettye Ball) Dedman, whose parents were pioneering residents of her hometown of Lake Mary. He is also survived by his daughters Deborah Loe and husband Brian, Laurie Mealor and husband David, all of Lake Mary, and Carol Patenaude and husband Roger, of Oviedo, Florida. Other family survivors include his six grandchildren, and nine great-grandchildren. He was preceded in death by his parents, Virgil and Bertha Dedman, and his sister, Marilyn Amling.

A memorial service for Tyler Dedman will take place at St. Peter's Episcopal Church, 700 Rinehart Road, Lake Mary, on August 7, 2021, at 11:00 am. His cremains will be inurned at a later date in the columbarium of the U.S. Naval Academy, Annapolis, Maryland. The family has requested that in lieu of flowers, memorial donations be considered for The Mountain of Hope, Inc., 393 West Lakeview Avenue, Lake Mary, Florida 32746 (https://www.mountainofhope.com/donate/). Arrangements entrusted to Baldwin-Fairchild Funeral Home-Oaklawn Chapel. www.BaldwinFairchildOaklawn.com
Published by Orlando Sentinel from Jul. 29 to Aug. 1, 2021.
To plant trees in memory, please visit the Sympathy Store.
MEMORIAL EVENTS
Aug
7
Memorial service
11:00a.m.
St. Peter's Episcopal Church
700 Rinehart Road, Lake Mary, FL
Funeral services provided by:
Baldwin-Fairchild Oaklawn/LM
MAKE A DONATION
MEMORIES & CONDOLENCES
Sponsored by The Orlando Sentinel.
4 Entries
The Korean War Veterans Association Department of Florida and Chapter 173 Casselberry send our belated yet deepest condolences on the passing of our Brother In Arms Tyler Freeland Dedman (US Navy Rear Admiral 1943-1982 service in 2 cruisers, 6 aircraft carriers, 3 aviation carrier attack squadrons:VA-35, VA-5, VA-10 China Viet Nam as well as many other assignments). He served his country well and honorably. My he Rest In Peace.
Jeannette Sieland
September 20, 2021
I was honored to meet Admiral Dedman through my in-laws, Dave and Pat Dearolph (both now deceased). Admiral Dedman was a great man who served our country with distinction in war and peace. I feel blessed to have known him and honored to share some reflections today. I would be interested in attending the interment at USNA, if non-family guests are included. With deepest sympathy.
James Carman
Friend
August 9, 2021
A kind and generous man who left his mark on the world and those he leaves behind. I Am blessed to have known him.
Sid Miller
Friend
August 5, 2021
Thank you for your service to this great country and its citizens Admiral.
Bryan D Gathright
August 2, 2021
Showing 1 - 4 of 4 results