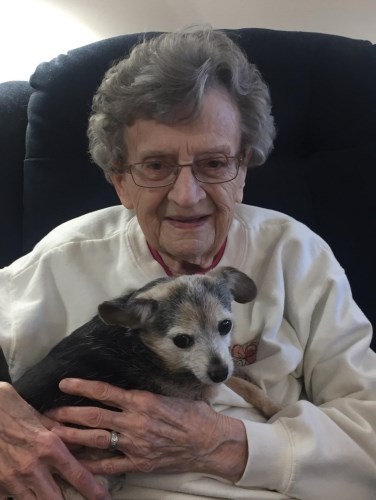 Mary was born on September 18, 1932 in Owatonna, MN, the daughter of Raymond and Irene (Malek) Johnson. She graduated from Owatonna High School in 1950 and attended Minneapolis Business School. She returned to Owatonna where she worked at the Owatonna Hospital as a Medical Secretary. While attending an Owatonna Aces baseball game Mary met the love of her life, Nicholas Klapperich. They were later married on February 15, 1958 at Sacred Heart Catholic Church and lived for many years in Owatonna. In 1973 they moved, along with their children Robert, Kevin and Joan, to West Concord where Mary worked as the elementary school secretary and later for the Dodge County Social Services. She and Nick also worked side by side for several years running Nick's TV and Appliance and Hometown Video. She also found time to give back to the community by being a part of the Library board, the West Concord Historical Society and fundraisers for local parks and the swimming pool. Mary loved spending time with her family, enjoyed road trips across the country, quilting weekends with her "clique", raising monarch butterflies, feeding the cardinals and gardening. But most of all she was the happiest being called Nana by her grandchildren!

A one hour visitation will be at the West Concord Funeral Home on Monday, August 2, 2021 from 10:00 AM to 11:00 AM. Funeral services will be held immediately following at the funeral home. A private family burial will be held later in the day at the Concord Cemetery. Memorial preferred to the West Concord Library or the Zumbrota Care Center.