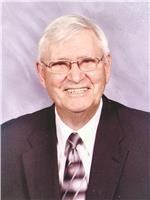 Forest L. Toftness, D.C., passed away peacefully, surrounded by his family in Lake Placid, Fla., on Saturday, Jan. 19, 2020, at the age of 92.
Forest, nicknamed "Bill" by his siblings, was born in Shell Lake, Wis. to Hulda Stand and Wilhelm Toftness on Jan. 8, 1928. He was the youngest of 11 children and was raised on a dairy farm. He joined the Merchant Marines in 1944, where he served two years. He graduated from Logan College of Chiropractic, where he met the love of his life and future wife, Myrtle Lou Harrington, also a graduate of Logan College, who preceded him in death in 2006.
After college graduation, he was drafted into the Army. He and Myrtle married and moved to Crailsheim, Germany, where he was stationed for two years. They returned to Owenton, Ky. where he was a chiropractor for 38 years.
Forest served on the Board of Directors for the First Farmers Bank for 25 years, was an active member of the Owen County Lions Club, President of the Owen County Chamber of Commerce, was a member of the Owen Masonic Lodge and served on the Owenton City Council for many years. Forest was a member of the Owenton First United Methodist Church.
Dr. Toftness was a member of both the Kentuckians Barbershop Chorus and the Sebring Harmonizers. He sang for more than 200 weddings in addition to funerals and special church events. He once sang the National Anthem for the Cincinnati Reds game in front of 40,000 people. He sang "O Holy Night" for the Christmas Eve service at the Owenton First Christian Church for many years. His singing touched countless lives, and his voice was loved by many. He always praised God for the gift of his voice and being able to share it.
Forest was an avid golfer and introduced the game he loved to his three children, where they grew up playing at Fairway Golf Course and Perry Park Resort. He also loved night fishing for crappie on Lake June in Florida and loved sharing his fresh catch of filets with neighbors and friends.
Forest is survived by special friend, Alda "Jinx" Marksberry, of Williamstown, Ky.; his sister, Gloria Gaynor of Woodbury, Minn.; his children, Mark (Kay) of Frankfort, Ky., Lea Anne (Hart) Brown of Mt. Pleasant, S.C. and Matthew (Colleen) of Owenton. He has four grandchildren, Daniel, Rachel, Joshua, and Vince and three great-grandchildren, Jackson, Dawson and Karlee.
He was preceded in death by three brothers, Irving Toftness, Luther Toftness, and Gordon Toftness; six sisters, Eva Bjork, Aagot Titus, Vivian Fenander, Harriet Barrett, June Peterson and Doris Stockman.
McDonald & New Funeral Homes are in charge of arrangements.
The funeral service was held Friday, Jan. 24, 2020, at the First Christian Church, 113 Main St., Owenton. Burial was in the Owenton I.O.O.F. Cemetery.
Should friends desire, memorial contributions may be sent to:
Kentuckiana Children's Center, 1810 Brownsboro Road, Louisville, KY 40206; First Christian Church, P.O. Box 463, Owenton, KY 40359 or Good Shepard Hospice, 1110 Hammock Rd., Sebring, FL 33870.
Published by The News-Herald on Jan. 29, 2020.
To plant trees in memory, please visit the Sympathy Store.
MEMORIAL EVENTS
To offer your sympathy during this difficult time, you can now have memorial trees planted in a National Forest in memory of your loved one.
MAKE A DONATION
MEMORIES & CONDOLENCES
0 Entries
Be the first to post a memory or condolences.