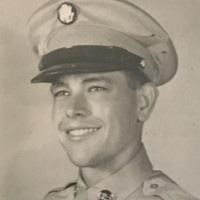 BORN
1924
DIED
2020
Foster Edward Smith Jr., 95
Foster Edward Smith Jr., 95, passed peacefully to be with the Lord on the morning of Tuesday, March 24, 2020. Foster, Joe or Fozzie as he was known, was a faithful servant and deacon at Monterey Baptist Church. He was born July 19, 1924, the son of Foster and Fanny Smith Sr. of Monterey. He is survived by his wife of 54 years, Geri Kemper (Noel) Smith; a son, Joe (Gina) Smith of Frankfort; a daughter, Peggy (Paul) Grimes of Frankfort; a step-son, Bobby Cook of Somerset; his grandchildren, Ethan (Missy) Grimes, Machaela Grimes and Madison Smith, and a sister, Elaine Massie.
Foster entered the U.S. Army Sept. 6, 1948, as a private and left as a Sergeant First Class on May 16, 1952. He was a decorated veteran who earned the Army Good Conduct Medal, National Defense Service Medal, United Nations Service Medal, Army of Occupation World War II Medal, Korean Service Medal and the Purple Heart.
Joe took care of and raised his family in Monterey as a full-time carpenter and farmer. He was a man among men who could fix about anything that needed fixing in his garage and all his many tools.
He will be missed by his friends and family at Monterey Baptist and Monterey Market. Cremation has been chosen, and a celebration of life will be at a later date when gatherings are permitted.
We love you; Pappy rest easy in the arms of Jesus.
Published by The News-Herald on Apr. 15, 2020.
To plant trees in memory, please visit the Sympathy Store.
MEMORIAL EVENTS
To offer your sympathy during this difficult time, you can now have memorial trees planted in a National Forest in memory of your loved one.
MAKE A DONATION
MEMORIES & CONDOLENCES
0 Entries
Be the first to post a memory or condolences.