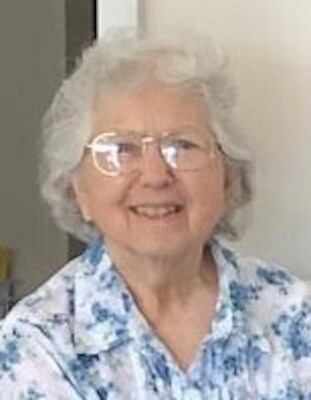 Greens Fork - Genevieve (née Nader) Rathke, a longtime resident of Indiana, died peacefully on May 8, 2021 at Indiana University North Hospital in Carmel. She was born on March 16, 1935 in Uniontown, Pennsylvania to Rose and George Nader, the third of six children. Following the death of her father, Genie moved with her mother and siblings to Cleveland, Ohio where she graduated from West Tech high school, having excelled especially in her favorite subjects of mathematics and accounting. Here she met her husband Paul Rathke, whom she married on October 26, 1957 at St. Maron's Catholic Church in Cleveland.

Genie, Paul, and children Michael and Kathleen resided in the Cleveland area until 1977, when they moved to east central Indiana. Prior to that time, Genie distinguished herself in the local community as one of the first true Soccer Moms - long before that now-common term was ever coined! - co-founding NOSO (North Olmsted Soccer Organization), one of the first youth soccer leagues on the west side of Cleveland. She never missed a game and became something of a legend for her enthusiastic, sometimes ingenious (!) cheering - not only for her own kids, but for every player on the field, regardless of ability or length of playing time.

Genie worked as a bookkeeper for Color Box, Inc. of Richmond, Indiana for many years, where she received commendations for her pinpoint accuracy, strong work ethic, and love of mentoring younger colleagues. She was also an active member of St. Elizabeth of Hungary Catholic Church in nearby Cambridge City, where she contributed her considerable skills in a variety of capacities including fundraising, religious education, and the church's funeral luncheon ministry. Once she moved to Zionsville, Indiana in 2016, Genie enjoyed attending Mass regularly and lighting candles at St. Alphonsus Liguori for those in need of prayers. She had an enormous heart and truly lived in service of others. Genie was never so happy as when counseling, helping, feeding, praying for, or simply talking kindly with someone. She truly never met a stranger, and had a way of making you feel always welcome and important; it made no difference whether she'd known you for years, or had just introduced herself because you looked as if you could use a friendly word.

Genie is survived by her children Michael Rathke of Cincinnati, Ohio and Kathleen (Donald Rogers) Rathke of Carmel, Indiana; siblings Joseph Nader and Emma Griesmer, as well as sisters-in-law Barbara Nader and Margaret Nader, all of the greater Cleveland area; and nieces, nephews, cousins, and many friends. She was preceded in death by her husband Paul Rathke, brother Donald Nader, sisters Dolores Bennett and Rose Marie Quarles, parents George and Rose Nader, and nieces Judy Ann Bennett and Laura Marie Quarles.

In keeping with Genie's express stated wishes, there will be no public funeral liturgy or calling at this time on account of the Covid pandemic. Fr. John Hall will officiate private graveside services at Riverside Cemetery in Cambridge City. A Memorial Mass will be scheduled at the earliest practical opportunity.

Marshall & Erlewein Funeral Home has been entrusted with the arrangements, where online condolences can be made at www.marshallanderleweinfuneralhome.com


To plant trees in memory, please visit our Sympathy Store.
Published by The Palladium-Item from May 12 to May 13, 2021.
MEMORIAL EVENTS
No memorial events are currently scheduled.
To offer your sympathy during this difficult time, you can now have memorial trees planted in a National Forest in memory of your loved one.
MAKE A DONATION
Please consider a donation as requested by the family.
MEMORIES & CONDOLENCES
1 Entry
May your memories of the wonderful times you shared with your loved one comfort you and your family, today and always.
American Heart Association
May 13, 2021
Showing 1 - 1 of 1 results