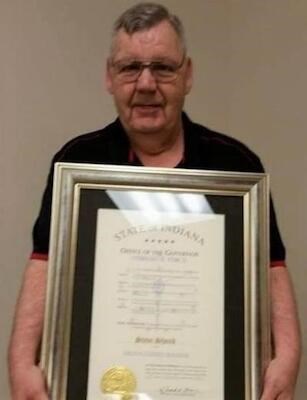 Richmond - Stephen (Steve) M. Shank died unexpectedly on January 16, 2021, at Reid Health He was born in Richmond on November 11, 1948, to Robert I. and Betty (Pace) Shank. He attended Hibberd Elementary and graduated from Richmond High School, Class of 1967 where he was president of the Electronics Club.

Steve began working at WKBV radio station in 1966 and worked up until his death (almost 55 years). Affectionately referred to as 'The Captain', he loved what he did and the people he worked with. He broadcast some of the biggest and most historic events during his years there including the Richmond Explosion, the Blizzard of 1978, and 9/11. He was the host of the radio show Trading Post in the '70s and '80s.

Steve served in U.S. Army, Vietnam, from August 1969 - June 1971 as an E-4 Specialist and became a long-time member of the Kirk-Little VFW Post 1108. In 2016 Steve was honored by the State of Indiana with the Distinguished Hoosier Award for service to his community. He was proud of being a Wayne County native and loved his hometown of Richmond.

He loved spending time with his children and grandchildren, including traveling with his daughter Sara's family, visiting with his son Stephen, and volunteering his time with his daughter Karen at the Wayne County Historical Museum. He enjoyed visiting with his extended family, sharing stories, family history, and making them his special recipes such as buckeyes, ham salad, beer cheese, and Maid-rites. He was also an avid Ham radio operator for many years and taught certification classes. He specialized in Morse Code.

He is preceded in death by his parents and his former wife Rosalie Ann Schumacher.

A private graveside service will in Earlham Cemetery, with military honors by the Wayne County Veterans Honor Guard. A celebration of Steve's life will be held later this year. Stegall-Berheide-Orr Funeral Home is handling arrangements. Online condolences may be sent to the family via the guest book at stegallberheideorr.com. In lieu of flowers, please send donations in Stephen M. Shank's name to the Wayne County Historical Museum 1150 North A Street Richmond, Indiana 47374 www.wchmuseum.org.

To plant trees in memory, please visit our Sympathy Store.
Published by The Palladium-Item from Jan. 19 to Jan. 20, 2021.
MEMORIAL EVENTS
No memorial events are currently scheduled.
To offer your sympathy during this difficult time, you can now have memorial trees planted in a National Forest in memory of your loved one.
Funeral services provided by:
Stegall-Berheide-Orr Funeral Home - Richmond
MAKE A DONATION
MEMORIES & CONDOLENCES
Sponsored by Stegall-Berheide-Orr Funeral Home - Richmond.
0 Entries
Be the first to post a memory or condolences.