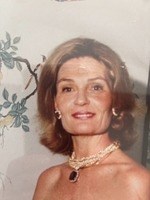 Barbara Damgard Cates
Southampton - Barbara Damgard Cates, 83, died peacefully in Southampton, Long Island, at her daughter's house on February 24, surrounded by her family. She is survived by her son, Dudley Cates, Jr., her daughter, Jessica Zirinis, her brother, John Damgard, and her three grandchildren, Alexandra, Basil and Nicholas. She is also survived by her devoted friend Fern de Narvaez. She was the caring and loving mother of three, including her son, Alexander Oughton Cates, who predeceased her in 1987.
The many people around the world who were fortunate enough to know Barbara were struck by her grace, poise and sophisticated elegance. Above all, she was known for her kindness, charm, humor and loyalty. Barbara brought out the best in everyone. She was born in 1937 in Chicago, attended The Masters School in Dobbs Ferry, New York, and graduated from Sarah Lawrence College with degrees in Arts and Humanities. This was the beginning of Barbara's lifelong love of New York City and the arts. She was married to Dudley Foulke Cates and that marriage ended in divorce.
When her son, Alexander, was killed in an avalanche at 17 years old, Barbara was faced with great tragedy. Yet she worked to overcome it by drawing on her pain and strength to see others through difficult times. She became a devout Christian and was devoted to her faith for the rest of her life. She quietly and gently gave comfort to many who were suffering their own losses and travails.
Besides family, friends and her faith, her passions included the theater and the arts. She traveled the world into her 80s, often to remote and exotic places. Her love and knowledge of the art world led her to join Sotheby's in New York, where she thrived for many years. Barbara was also a patron of the arts through her many years of work as a director of the Belgravia Foundation, a charitable foundation dedicated to the arts and education. She was also devoted to a number of charitable organization and served on the boards of The Boys Club of New York and the New York Infirmary Beekman Downtown Hospital.
A celebration of her life will be planned this summer. Barbara will be missed terribly by her many friends and family.
Published by Palm Beach Daily News from Apr. 14 to Apr. 18, 2021.
To plant trees in memory, please visit the Sympathy Store.
MEMORIAL EVENTS
To offer your sympathy during this difficult time, you can now have memorial trees planted in a National Forest in memory of your loved one.
MAKE A DONATION
MEMORIES & CONDOLENCES
0 Entries
Be the first to post a memory or condolences.