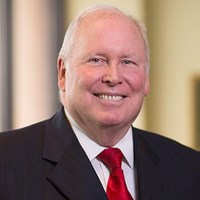 ABOUT
Cardinal Newman High School
Donald J. Beuttenmuller, Jr.
Donald J. Beuttenmuller, Jr., 73 years old, of Palm Beach died on January 12, 2021, after a courageous battle against Covid-19.
A native of West Palm Beach, Don was born to Ellen Downey Beuttenmuller and Donald J. Beuttenmuller. His adventurous childhood was spent playing along the intracoastal accompanied by his brothers and sister and numerous cousins in the Downey and Gingras families.
Loyalty and excellence defined Don's life. Don was part of the first freshman class at Cardinal Newman High School where he was class president all four years. He excelled at athletics, earning MVP of the Newman football team not as a high-profile quarterback or running back, but as a lineman doing the blocking. Despite his success on the football field, his true passion was swimming. Don held two national junior individual records and was a member of a national record-setting relay team. He loved the pool and for the past forty years you could find Don in his favorite lane at the Sailfish Club swimming laps.
Don graduated from Georgetown University, receiving a degree from the Edmund A. Walsh School of Foreign Service in 1969. At Georgetown he met and fell in love with his wife of nearly 50 years, Marilyn. During his college years he spent time studying in Mexico City, gaining a love of the language, culture and mariachi music.
After college Don came home to Florida to attend law school at the University of Florida. He served as an Assistant State Attorney for the 15th Judicial Circuit of Florida, before joining the Gunster law firm where he practiced for the last 40 years. His work took him all over the state of Florida and to Latin America. Don was passionate about Gunster and the success of its people. He began as a litigator and served as Managing Shareholder from 2002-2008 and then as general counsel for the firm. He was described by a partner as a "lawyer's lawyer" who truly loved the practice of law and enjoyed mentoring new attorneys at the firm. Another lawyer described Don as the most loyal and humane person with whom he had ever worked. Don was described by many as the North Star that pointed people in the right direction if they got off course.
Don loved his family, friends and colleagues and his unfailing good humor brought joy to everyone around him. All will miss his unforgettable uproarious laugh.
Don is survived by his wife Marilyn Beuttenmuller, his daughter Margie Betten (Christian Siegrist), his son Buck Betten (Elizabeth), his grandchildren Bridget, Millie, and Charlie, his sister Anne Ruben, his brothers David and Kevin (Maria) Beuttenmuller, his mother-in-law Margaret Nemzura, his sister-in-law Marjorie Brinck (Edward), and numerous nieces and nephews.
Because of concern for the health of their friends, the family will hold a private mass at St. Edward Church. If you wish to honor Don, please make a donation to Cardinal Newman High School or the Palm Beach Zoo in lieu of sending flowers.
Published by Palm Beach Daily News from Jan. 16 to Jan. 17, 2021.
To plant trees in memory, please visit the Sympathy Store.
MEMORIAL EVENTS
To offer your sympathy during this difficult time, you can now have memorial trees planted in a National Forest in memory of your loved one.
MAKE A DONATION
MEMORIES & CONDOLENCES
10 Entries
My condolences to the family. Back in the late 1980s I was appointed to the circuit bench and immediately faced a potential election. Although we had just recently met, Don volunteered to serve as my campaign treasurer. Needlessly to say, no money was spent as I went without opposition. At the time, I became only the third black circuit judge in Palm Beach County history. I then went on to work with Marilyn for years at the Fourth DCA. I was always grateful for Don's help. May the comfort of God be with the family and may Don rest in peace.
Judge Matthew Stevenson - ret.
Friend
January 27, 2021
Years ago, as a trial lawyer I had many professional battles with Beutt. Many nose to nose confrontations were followed by post litigation cocktails, mutual respect and great laughs.
He nicknamed me "Rambo" which was a badge of honor I will cherish.
He was a brilliant lawyer and an even greater person.
I will certainly miss his presence and counsel.
Tim McCarthy
January 24, 2021
Please accept my sincere condolences.
My memories of Don go back over 60 years ago, swimming. He was a pleasure to know and great fun.
RIP Don
Shelley Hill
Shelley Hill
Friend
January 24, 2021
My husband, Bob, and I carpooled and swam AAU competitively with Don
thru 6-12 grade. So many great memories! He was truly a great friend with a sly sense of humor. We are so very sorry for the loss of a great, successful, caring man, who we will remember so fondly.
Norma Oliphant Bridges and Bob.
Norma O. Bridges
Friend
January 21, 2021
Dearest Marilyn, Thank you for helping your anonymous prayer team (Ellen's friends) get to know your beloved husband through your beautiful obituary. What a remarkable man God gave you - and we are praying that Don will continue to be fully alive in your heart, as the good Lord keeps that love every bit as vital as when Don was by your side. We are also holding you in prayer so that your focus can be on Don's "departure" - to a joyous place with the Lord - rather than on his death. Blessings and hugs, Neely Towe


Neely Towe
January 18, 2021
I remember Don from high school very well. Really good athlete, really smart and one of the nicest people you will ever meet. My thoughts and prayers are with your family.
Carl Crown
January 17, 2021
Don, called Sonny by his cousins and family, will be sorely missed He was always strong-the strongest; and loyal-the most loyal. A cornerstone for the family.